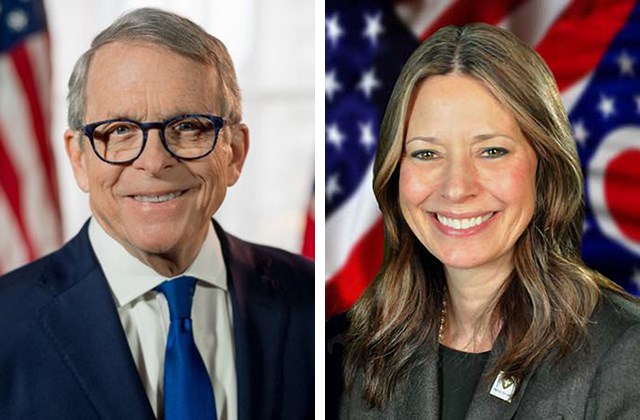 COLUMBUS — Gov. Mike DeWine has issued an order extending the state's closure of all K-12 schools to May 1 — and he won't rule out a further extension.

"We want to take this kind of one chunk at a time," he said during Monday's briefing on the state's coronavirus response. "We don't know exactly where we're going to be but it's clear we're not going to be back in the classroom before May 1.

"Is it possible that we'll have to continue the way it is now until the end of the school year? Yes, it is. That's certainly possible. We just don't know yet."

DeWine said some Ohio superintendents have expressed concern that their students would be "further behind," adding that not all districts have the same distance-learning capabilities. The governor said some of Ohio's $4.5 billion in federal coronavirus relief funding includes money for schools, though it's not clear how it can be used.

Maj. Gen. John Harris Jr., Adjutant General of the state’s National Guard, said uniformed guardsmen and women would be in local communities "in increasing numbers" soon as the virus' spread is projected to meet its peak between late April to mid-May. Service members plan to meet with regional virus response leaders to ensure all the state's available resources are "in the right place at the right time," such as personal protective equipment, which is facing extreme demand.

DeWine applauded the U.S. Food and Drug Administration's decision Sunday night to fully approve the use of new technology that could sterilize up to 160,000 N95 masks in Ohio, allowing them to be re-used up to 20 times. Columbus-based research firm Battelle pioneered the process, which is expected to help the state conserve the gear.

The company will be ramping up its output as it receives the masks from hospitals, which is expected to begin today, Lt. Gov. Jon Husted said.

DeWine also said inmates in Ohio prisons have been put to work making PPE. It's projected the effort could create as many as 4,000 hospital gowns, 5,000 surgical masks and 1,400 gallons of hand sanitizer, he said.

Dr. Amy Acton, Ohio Department of Health director, said one of the National Guard's jobs is to work with hospital CEOs to double the state's PPE inventory.

Of the state's 1,933 total confirmed cases of COVID-19, about a quarter have required hospitalization, including 8 percent in intensive care units where ventilators are used, Acton said.

Seventy of Ohio’s 88 counties now have confirmed cases of coronavirus. There are 117 cases in Mahoning County; 42 in Trumbull County; and 11 in Columbiana County, according to coronavirus.ohio.gov.

Statewide, there have been 40 deaths in 19 counties, including four in Mahoning County; three in Trumbull; and two in Columbiana. Columbiana and Trumbull county health officials on Monday each reported one new death from the disease.

The number of hospitalizations in Ohio reached 475, the state reported Monday.

So far, about 27,000 people have been tested across the state, Acton said Monday, reminding that virus testing remains limited and is oft-reserved for healthcare workers or the most at-risk patients.

DeWine urged healthcare providers to send their virus samples to the Ohio Department of Health for testing rather than to private labs which are becoming inundated, leading to delays of up to six days. The state health department conducts the tests for free and can turn return results in as quickly as eight hours, Acton said Monday.

“There’s nothing wrong with the private labs. They do good work,” DeWine said. “But they are behind. We are not.”

Here are the data presented during Monday’s briefing:

Here are more developments Monday from the state and nation:

• President Donald Trump on Monday extended the U.S. Centers for Disease Control and Prevention guidelines on social distancing and hygiene until April 30. Ohio Gov. Mike DeWine, responding to reports of Ohioans “flooding” outdoor parks without maintaining the recommended 6-foot distance from each other, suggested Monday the state may this week issue new orders or restrictions based on those guidelines, though he did not elaborate further.

• Youngstown City Council has canceled its regular meeting plus a Finance Committee meeting, both scheduled for Wednesday.

• Dr. Amy Acton, director of health for the Ohio Department of Health, will be the keynote speaker for the 28th annual Athena Award Dinner on May 14 sponsored by the Youngstown/Warren Regional Chamber and The Vindicator.

• U.S. Rep. Tim Ryan of Howland, D-13th, announced the Mahoning Valley is set to receive nearly $3.9 million to combat coronavirus. The funding, part of a $5 billion grant package from the U.S. Department of Housing and Urban Development, includes about $3.2 million for the City of Youngstown and about $702,000 for the City of Warren, as well as about $367,000 for the City of Alliance. The grant programs allow the funding to be used to respond to economic and housing impacts as well as for developing strategies to help the homeless in those areas.

• New statistics from the Institute for Health Metrics and Evaluation, an independent health research center at the University of Washington, appear to indicate Ohio will have enough hospital capacity when the spread of coronavirus reaches its peak, which the data suggest will be April 19. The report suggests the state won’t be facing a shortage of hospital beds, though it will need more than 450 additional ventilators. Ohio Lt. Gov. Jon Husted said Monday, however, the IMHE researchers are using a statistical model, rather than an epidemiological model. Acton has previously indicated the state could see as many as 10,000 new confirmed cases of the virus per day when it peaks sometime between late April and mid-May. The IMHE study does not account for the average 20-day hospital stay of a COVID-19 patient, she said.

• According to the Pennsylvania Department of Health on Monday, there are 4,087 COVID-19 cases in the state which have led to 48 deaths. There are 10 cases in Lawrence County with one death; and seven cases in Mercer County with no known deaths.

• Pennsylvania’s efforts to slow the coronavirus pandemic include a stay at home order that covers 19 counties. Those in the impacted counties must stay at home until at least April 6. Lawrence and Mercer counties are not on the list yet, however.

• Because of the coronavirus pandemic, the U.S. Census Bureau has indefinitely suspended field operations and training for workers for the 2020 Census. Census gathering was expected to employ many people in the Valley.

• Much like their pro sports counterparts, Little League baseball players will have to wait to start their 2020 season. Over the weekend, the league postponed the start of the season until at least May 11.

Trumbull County reports 312 new coronavirus cases, no new deaths
Nov 23, 2020 4:46 PM
Comments
We welcome your feedback and encourage you to share your thoughts. We ask that you be respectful of others and their points of view, refrain from personal attacks and stay on topic. To learn about our commenting policies and how we moderate, please read our Community Guidelines.