The new funding is separate from the $440 million in federal CARES Act funding set aside for public and private K-12 schools and $190 million for higher education institutions.
Jul 9, 2020 2:54 PM By: Mahoning Matters staff 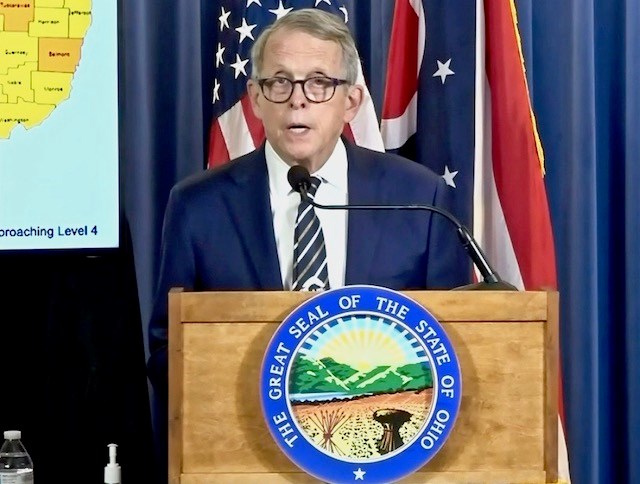 Gov. Mike DeWine during the state coronavirus update on Tuesday.

COLUMBUS — Ohio colleges and universities would receive $200 million to help them safely reopen for fall semester during the COVID-19 pandemic, while K-12 schools will receive $100 million, under a new funding plan state officials intend to submit Monday to the Ohio Controlling Board.

Gov. Mike DeWine announced the new relief funding plan during Thursday's briefing on the state's coronavirus response. The new funding is separate from the $440 million in federal CARES Act funding set aside for public and private K-12 schools and $190 million for higher education institutions, he said.

"We hope to have additional money. The figure that we have been talking about — for example, for K-12 schools — is certainly higher than that initial $100 million, but we wanted to get this $100 million out and we wanted to let the schools be able to plan, based on that money.

"It may not cover all of the increased expenses schools may face during this pandemic."

Ohio's 167 higher education institutions will also be expected to operate according to new pandemic guidelines to be released today on the state's coronavirus website.

DeWine said on-campus testing should be "integral" parts of reopening plans, and administrators must develop procedures to isolate students, faculty and staff who begin showing symptoms — possibly at designated university housing spaces that would be "left empty" to accommodate the sick.

The state updated its Public Health Advisory System map, which details COVID-19 risk levels by county, based on seven indicators. The status of Mahoning, Trumbull and Columbiana counties has not changed since the map was introduced last week.

Trumbull County remains at the second-highest, "red" alert level. During the past three weeks, COVID-19 cases have increased, along with several health care indicators, the governor reported.

"COVID-19 is still very much with us ... and these resources will help families across our state stay housed, stay healthy and get ready for the future," DeWine said.