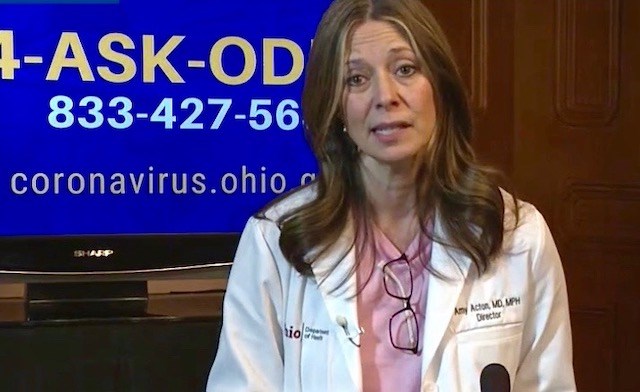 COLUMBUS — Ohio Department of Health Director Dr. Amy Acton gave the first look at the state's so-called coronavirus curve, which shows preventative measures Ohioans are taking to slow the spread of the disease have decreased the virus' impact on the state's hospitals from 50 to 75 percent.

"That's crucial, but we've got to do even more," Acton said.

She said it's not a question of whether the virus will surge in the state, but when. The state projects it could develop between 6,000 and 8,000 cases each day at that point, expected to be between late April to mid-May, Acton said.

Acton estimated the state will need "millions more" N95 respirators, which healthcare professionals and first responders need to protect from the microscopic coronavirus. Conservation efforts across the state have reduced the state's need 40-fold, she said.

Ohio Lt. Gov. Jon Husted responded to state unemployment figures, released today, showing a record 187,780 claims were filed just in the last week. For the whole of 2019, the state reported just less than 370,000 claims, he said.

Husted said though the extreme burden on state systems has caused delays, Ohioans' benefits will be retroactive to the time when they became eligible.