Two other bills pending before lawmakers also seek to limit the Ohio Department of Health’s powers.
May 21, 2020 2:47 PM By: Todd DeFeo 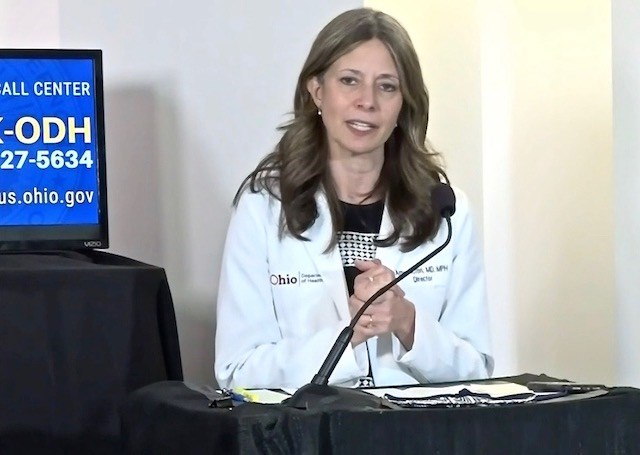 Dr. Amy Acton speaks during the state's May 12 coronavirus update.

COLUMBUS — The state Senate denied a bid to give lawmakers oversight of pandemic orders issued by the Ohio Department of Health.

The state Senate unanimously rejected an amended version of Senate Bill 1, which the House passed by a 58-37 margin earlier this month. A key provision added by the House targets orders issued by ODH Director Amy Acton, which have led to the state's shutdown amid the COVID-19 pandemic.

“I always favor legislative oversight since members of the legislature serve as the direct line to government for Ohioans,” Sen. Theresa Gavarone, R-Bowling Green, said in a floor statement posted to her Facebook page. “And I think that generally Republicans and Democrats in the legislature agree with that premise, however during this uncertain time, unfortunately, politics are getting in the way.”

“I voted no on Sub. S.B. 1 because Ohioans’ health and safety MUST come before politics,” state Sen. Teresa Fedor, D-Toledo, said in a tweet, adding that “even one death is too many to justify removing the most precious tool from our public safety toolbox.”

Senate Bill 311, sponsored by state Sens. Kristina Roegner, R-Hudson, and Rob McColley, R-Napoleon, would immediately reopen the state. It would also require the governor to sign any shutdown orders.

State Rep. Reggie Stoltzfus, R-Paris Township., introduced another piece of legislation, House Bill 649, to give lawmakers oversight of ODH pandemic orders and limit orders to 30 days. It also would bar entities other than the General Assembly from delaying state or local elections.

“Every legislator has taken the oath to uphold the Ohio Constitution, and [it is] time we fulfill our duty and act on this important legislation,” Stoltzfus said in a news release.

Meanwhile, on Wednesday, a Court of Common Pleas judge in Lake County barred the governor and ODH director from “imposing or enforcing penalties solely for noncompliance with the director’s order” against gyms, health clubs and other workout facilities, according to the 1851 Center for Constitutional Law.

Trumbull County reports 4 new coronavirus cases
Sep 18, 2020 3:53 PM
Comments
We welcome your feedback and encourage you to share your thoughts. We ask that you be respectful of others and their points of view, refrain from personal attacks and stay on topic. To learn about our commenting policies and how we moderate, please read our Community Guidelines.