Recovering COVID-19 patient leaves a heartfelt message for his caregivers

After 10 days in Cleveland Clinic's ICU, a recovering COVID-19 patient left a message of thanks to his care team on the isolation glass that was his 'window to the world' during treatment.
0
Mar 29, 2020 10:16 AM By: Cleveland Clinic News Service 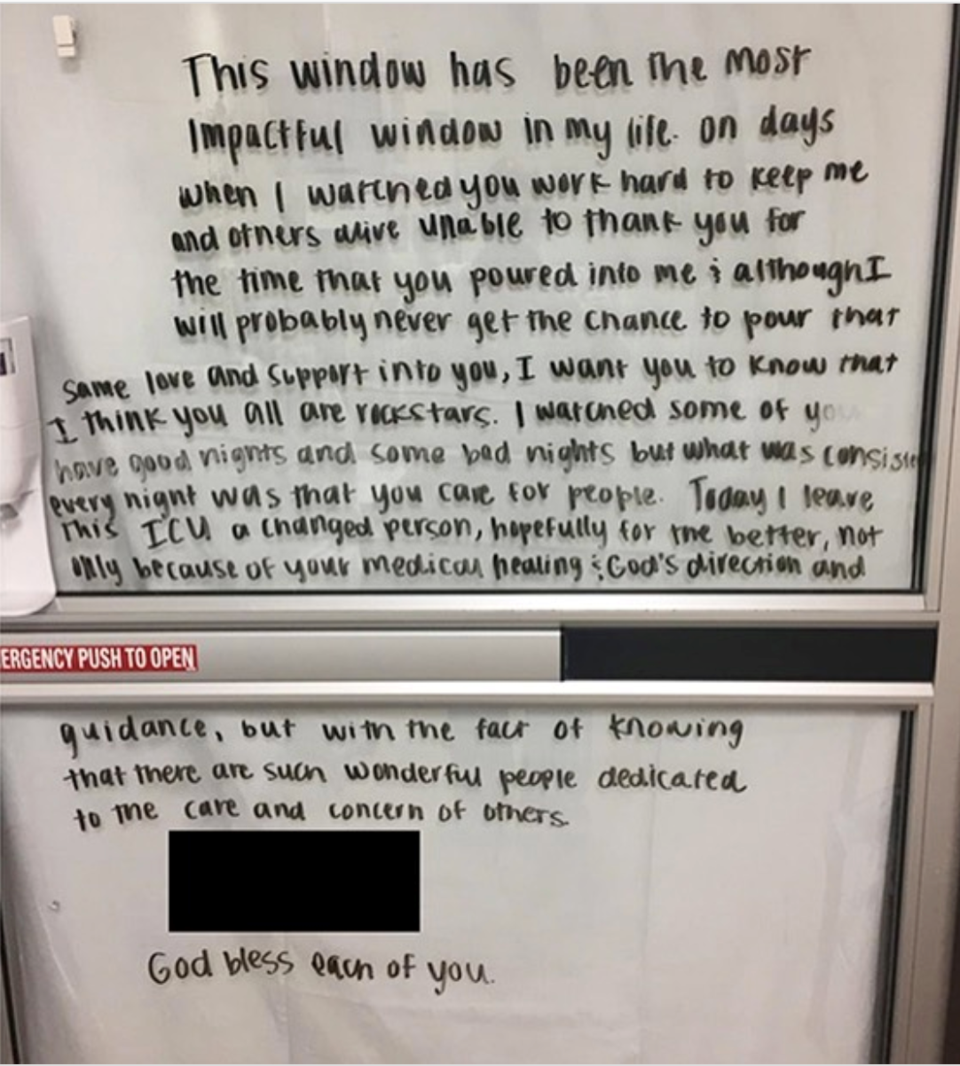 CLEVELAND – Nic Brown, 38, of rural Ohio, never expected a headache and fever to be COVID-19.

“I assumed I just had a flu,” said the father of three.

Brown’s symptoms worsened and he was hospitalized and diagnosed with novel coronavirus. A few days later, he was transferred to the intensive care unit (ICU) at Cleveland Clinic.

“He was receiving mechanical ventilation and he was deeply sedated at that time,” said Eduardo Mireles, M.D., director of the medical intensive care unit at Cleveland Clinic. “He was in the first stages of the severe illness from the COVID and we were trying to gauge how much lung injury he had and how he was responding to it.”

Brown was in ICU isolation and the glass wall separating him from the care team became his ‘window to the world.’

“They would write goals that they wanted to see me accomplish for that day, specifically, in my breathing and my respiratory health,” said Brown. “And then at the bottom, they wrote ‘we will get you home.’”

After ten days in the ICU (several of which were on a ventilator), and a cocktail of medications – including an experimental antiviral drug – Brown was moved to a regular hospital room. But first, he left a special message for the team that saved his life.

“I absolutely love them; they were amazing people. That’s why I wrote the message that I did on the wall because I truly felt from them love,” he said.

The message on the window read:

This window has been the most impactful window in my life. On days when I watched you work hard to keep me and others alive, unable to thank you for the time that you poured into me — and although I will probably never get the chance to pour that same love and support into you, I want you to know that I think you all are rockstars.

I watched some of you have good nights and some bad nights but what was consistent every night was that you care for people.

Today I leave this ICU a changed person, hopefully for the better, not only because of your medical healing and God’s direction and guidance, but with the fact of knowing that there are such wonderful people dedicated to the care and concern of others. God bless each of you.

Dr. Mireles said the message on the glass was powerful for him and his team. “We had his back and every time I read it, it becomes stronger for me,” said Dr. Mireles. “He calls us ‘rock stars,’ but it’s the other way around. He was in isolation for ten days inside that room, without being able to communicate, without his family and he took this amazingly. He’s a trooper, and he deserves all the credit.”

And Brown’s care team kept their promise – they got him home.

He’s currently recovering with his family and doing well. Meanwhile, Dr. Mireles encourages people to continue working together by practicing social distancing and staying home to stop the spread of COVID-19.

For second straight day, Mahoning reports no new COVID-19 deaths
May 25, 2020 2:52 PM
Comments
We welcome your feedback and encourage you to share your thoughts. We ask that you be respectful of others and their points of view, refrain from personal attacks and stay on topic. To learn about our commenting policies and how we moderate, please read our Community Guidelines.