Eve Mueller, Gov. Mike DeWine's deputy director of communications, said the idea of using TikTok to spread the message of social distancing was a great way to get a younger audience to listen.
Jun 9, 2020 4:30 AM By: Public News Service 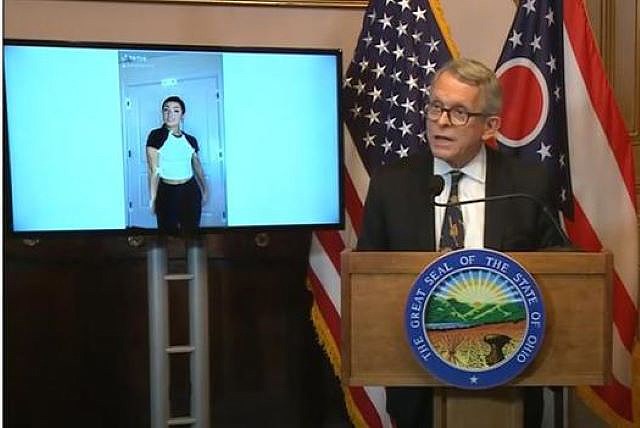 But her TikTok video is a #distancedance challenge aimed at preventing the spread of COVID-19 among the app's dedicated users.

D'Amelio's video is part of Gov. Mike DeWine's effort to encourage young people to stay at home and keep their distance while in public. In March, DeWine reached out to Procter and Gamble chief executive David Taylor with the idea of creating something that would spread the message to a younger audience.

Taylor, along with chief brand officer Marc Pritchard, reached out to Grey New York CEO Debby Reiner and social media director Kenny Gold. Together they presented the #distancedance concept with D'Amelio as the leading star.

"They thought, ‘Charli's amazing, she's got a lot of followers, she can create a distance dance, and then we can challenge other TikTokers and others to do the distance dance,'" Pritchard said. "And then when they post it, what we can do is donate product."

As an incentive to circulate the video on the mobile-video app, P&G promised to donate a product to those in need for every new #distancedance video shared. D'Amelio promoted #distancedance on “Entertainment Tonight” in May and "The Tonight Show Starring Jimmy Fallon" in March. The number of videos (and products donated through the relief organizations Feeding America and Matthew 25: Ministries) then climbed to 3.5 million.

Since its release, D'Amelio's video has garnered 15.9 billion views. The #distancedance challenge is TikTok's most viewed hashtag challenge to date, and D'Amelio now is the most followed account on the platform with 60 million followers.

One video, "Social distancing works," breaks down what can happen when distancing isn't practiced, and it has aired in television commercials.

The governor isn't the only public-health advocate in Ohio using TikTok to reach young people. Dr. Nicole Baldwin, a Cincinnati pediatrician, made national headlines when she posted a video Jan. 11 advocating for vaccines.

The video quickly went viral, and Baldwin encountered both positive and negative responses. While Baldwin received backlash from anti-vaccinators on TikTok, she said most of the negativity came from Facebook and Twitter. Baldwin still is creating videos and believes young people are listening.

"I get a lot of DMs from people who saw me on TikTok — young adults who have questions about medicine and going to medical school and different things," Baldwin said.

Baldwin turned to TikTok because she wanted to reach a different, younger demographic than she does on her other social media accounts. She said she tries to share public-health information that is evidence-based from the Centers for Disease Control and Prevention or the World Health Organization.

Since then, Baldwin has created more videos on TikTok highlighting how to properly wear a face mask and achieve appropriate hygiene. Through her videos, she also has urged viewers to stay at home and given advice to future medical students. Along with her various social media platforms, the pediatrician also runs a blog with tips on how to stay healthy and other advice for parents and children.

Although Pritchard said the #distancedance campaign is the only one he and DeWine have planned so far, he'd be open to working with the Ohio governor again in the future.

Eve Mueller, DeWine's deputy director of communications, said the idea of using TikTok to spread the message of social distancing was a great way to get a younger audience to listen.

— This collaboration is produced in association with Media in the Public Interest and funded in part by The George Gund Foundation.