Through ‘Got You Covered,’ Boak & Sons donates roof to veteran

“We have employees who are veterans,” owner Sam Boak said. “I myself am not, but I'm blessed that men and women have gone out there, represented all of us in this country and protected us."
Sep 8, 2020 4:11 AM By: Alyssa Weston 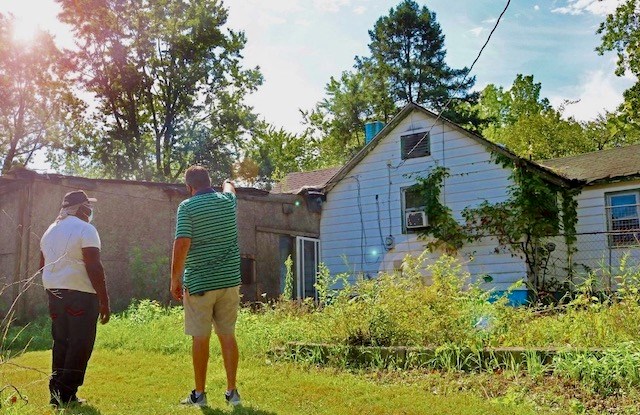 This summer, Boak & Sons Inc. is giving back to the community with a new initiative called “Got You Covered.” For its first project, the company donated a roof to a local veteran. (Photo provided)

[EDITOR'S NOTE — Difference Makers articles share stories of the local heroes making a difference during the extraordinary times of the COVID-19 pandemic. This section is made possible by Eastwood Mall and named in honor of Mark Eckert, who made a difference in the Mahoning Valley.]

YOUNGSTOWN — This summer, Boak & Sons Inc. is giving back to the community with a new initiative called “Got You Covered.”

For its first project, the company donated a roof to a local veteran. Boak & Sons partnered with the Mahoning Valley Veterans Service Commission to connect it with its first recipient, 75-year-old Johnny Rivers.

“We felt that it was a no-brainer for the gentleman that we picked,” owner Sam Boak said. “He needed a lot of work on his house. He was a responsible person, and so we had no second thought. Let’s help and go and move on from there.”

Boak said the beginning stages of Rivers’ home renovation have just made headway as a crew recently began clearing weeds around the outside of the house.

Next, the Boak & Sons crew will paint the inside of the home, and in a few weeks, they will replace the entire roof.

For Boak, “Got You Covered” is a way to give back to veterans by using the company’s expertise of exterior remodeling.

“We have employees who are veterans,” Boak said. “I myself am not, but I'm blessed that men and women have gone out there, represented all of us in this country and protected us. So this is my way of giving back as I think all employers should be doing.”

Boak noted that Brianna Figley, a Boak & Sons employee and member of the National Guard, is also a key player in the project.

Other businesses lending help to “Got You Covered” are Owens Corning, a global roofing material supplier, which is donating all materials needed; and My Second Nature, a local landscaping company, which is fixing up Rivers’ exterior.

At Boak & Sons, giving back is part of its mission. Boak said his staff first felt the satisfaction of giving back while aiding in renovations for a Boardman home, featured on an episode of "Extreme Makeover: Home Edition" in 2005.

“We felt so honored to help with it, and our employees felt so gratified helping with the project, that every year we pick a couple of projects to give back in the community,” he said.

Additionally, last month Boak & Sons renovated the house of longtime employee Mark Odom, who died from a heart attack in 2019. Odom had been with the company for 20 years.

“We took the opportunity to go re-side his whole house for his wife and family,” Boak said.

“We take it as part of our responsibility to help give back, and we've done that with several of our past employees [who] have retired, and maybe some may have family members passed on. We still go take care of their house, whatever the concerns may be,” he added.

Boak and Sons has served the Mahoning Valley for more than 40 years. The company started out as an insulation contractor in the 1970s.

“In the beginning of the 1980s, we migrated into roofing of all various types for residential and commercial. And then at the start of 2000, we pushed into siding, gutters, all kinds of metal for houses and commercial,” Boak said.

This story was made possible by our Community Leaders Program. Learn more