A recording of the event, along with a historical video, can be viewed on Stambaugh Auditorium’s website and YouTube channel.
Aug 4, 2020 2:45 PM By: Mahoning Matters staff 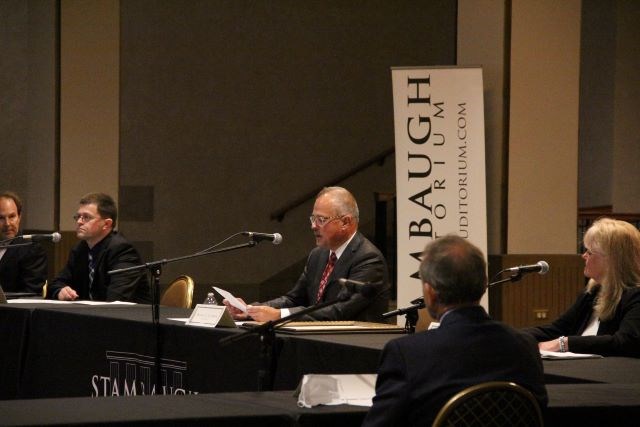 YOUNGSTOWN — The members of the board of directors of the Henry H. Stambaugh Auditorium Association met Monday to commemorate the 100th anniversary of the association’s first board meeting, which took place Aug. 3, 1920.

At that time, the original trustees met to begin the process of carrying out the final wishes of Henry H. Stambaugh and to begin planning for the construction of Stambaugh Auditorium, which opened in December 1926.

The commemorative meeting, which was presented as a hybrid event, was held in the Jeanne D. Tyler Grand Ballroom at Stambaugh Auditorium, 1000 Fifth Ave., and also was livestreamed. A video highlighting founder Henry H. Stambaugh and the events leading up to the first board meeting was shown.

A recording of the event, along with the historical video, can be viewed on Stambaugh Auditorium’s website and YouTube channel.

“As members of the board, we are committed to preserving the legacy left by Henry H. Stambaugh,” Terry Cloonan, board president, said. “It is our duty to preserve and maintain not only this fabulous building, but to also preserve the founding mission of the organization.”

Matt Pagac, Stambaugh Auditorium’s chief executive and operating officer, noted the parallels that were taking place 100 years ago when the world was recovering from the Spanish Flu pandemic. Pagac pointed out the impact that the COVID-19 pandemic has had on Stambaugh Auditorium, including the cancellation of 105 events in 120 days.

“Our staff is working every day to ensure that the cultural institution that is Stambaugh Auditorium will continue long into the future, far past the COVID-19 pandemic and our 100th anniversary in 2026,” Pagac said.

Some of the changes that Stambaugh Auditorium has implemented include: