In place of its usual fall performance, OWR will present “A Taste of La Traviata” in November.
Aug 6, 2020 5:45 AM By: Mahoning Matters staff 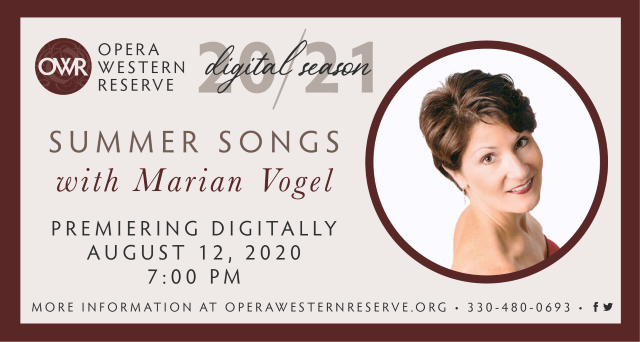 The first concert in the series is “OWR Presents: Summer Songs with Marian Vogel.”

Vogel, a regionally renowned soprano, accompanied by pianist Benjamin Malkevitch, performs a recital that will be available for streaming for free at 7 p.m. Aug. 12. Recorded in the Stambaugh Auditorium concert hall, the program contains opera favorites, show tunes and behind-the-scenes extras.

Vogel made her Carnegie Hall debut singing the soprano solos in Mozart’s “Requiem” and John Rutter’s “Magnificat.” She also has performed with the Cleveland Orchestra at Cleveland’s Severance Hall and recently on its European tour, including performances at the Musikverein in Vienna and in Luxembourg. She has performed many leading operatic roles, including Cio-Cio San in “Madama Butterfly,” Mimi and Musetta in “La Bohème,” Violetta in “La Traviata,” Tosca in “Tosca,” Donna Elivira in “Don Giovanni,” as well as many Gilbert and Sullivan heroines and musical theater roles. Vogel is a two-time first-prize winner of the Metropolitan Opera National Council District Auditions and the winner of the Belle O. Morse Young Artist Award.

In place of its usual fall performance, OWR will present “A Taste of La Traviata,” which will be available for viewing Nov. 13. The production features video highlights of “La Traviata,” recorded at Stambaugh Auditorium, and shows scenes in and around Stambaugh.