The blues are coming to Struthers tonight

When The Matt Barranti Band takes the stage tonight at Social 22, the hope is to start a local blues trend. Music promotion organization Tuesday Blues Day will host the event, hopeful for it to become the first in a potential series.
Oct 17, 2020 7:00 AM By: Ellen Wagner 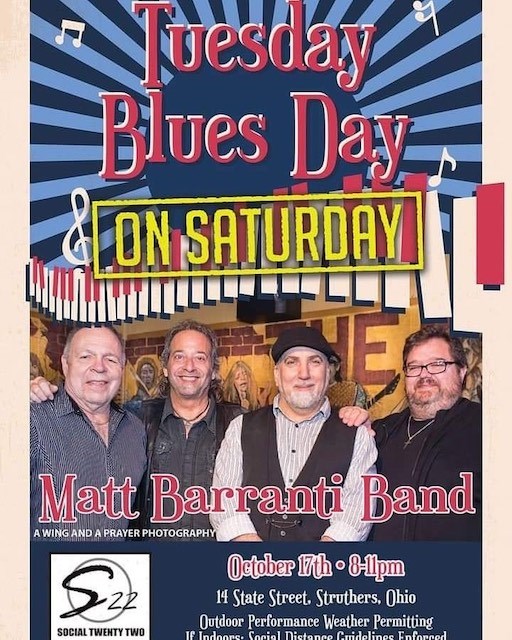 When The Matt Barranti Band appears tonight at Social 22 in Struthers, the hope is to start a local blues trend.

STRUTHERS — When The Matt Barranti Band takes the stage at Social 22 tonight, the hope is to start a local blues trend.

The music promotion organization Tuesday Blues Day will host the event at the State Street venue and is hopeful for it to become the first show in a potential series.

There is no cost for the show. Capacity is based on state COVID-19 safety guidelines and will be monitored throughout the night. Tables inside will be set up for social distancing, and guests are asked to wear masks while walking around inside Social 22. They can be removed while sitting at tables.

Social 22 is located in downtown Struthers with a pub-style experience, including beer on tap, food and weekly live music and events.

Tracy Randall, who started Tuesday Blues Day, said the future of the series is based on tonight's turnout.

“It's kind of like a test run to see if there would be a demand for it by the public, and we have enough attendance to make it worthwhile to bring in the good quality blues acts,” Randall said.

Randall started Tuesday Blues Day to bring blues artists to perform on Tuesday nights at bars in Pittsburgh in May 2019.

The performances were on Tuesdays since a lot of bands perform at bigger and more established venues on weekends. Randall said she chose a day of the week that would get good, quality blues performances for a cheaper price at smaller and local venues.

“What made it really nice about having it on a Tuesday was that members of different bands around the area were usually off on Tuesday nights, so the music community would come out and support my program,” Randall said.

COVID-19 restrictions in Pennsylvania do not allow indoor music performances. Since she moved to Mahoning Valley during the pandemic, Randall now wants to try to bring blues to the area.

“I feel like there is a place for blues in the Mahoning Valley,” Randall said.

Social 22, 14 State St., opened in February as a live music venue. Owner Colleen Moore had to adjust to carryout and was unable to receive a liquor license until August.

“Her resilience and adapting her music club to be a restaurant for carryout has been something that's attracted me to connecting with Colleen,” Randall said.

According to its website, The Matt Barranti Band formed in 1991 as an Allman Brothers/southern rock tribute band and now plays its own unique style of blues-rock.