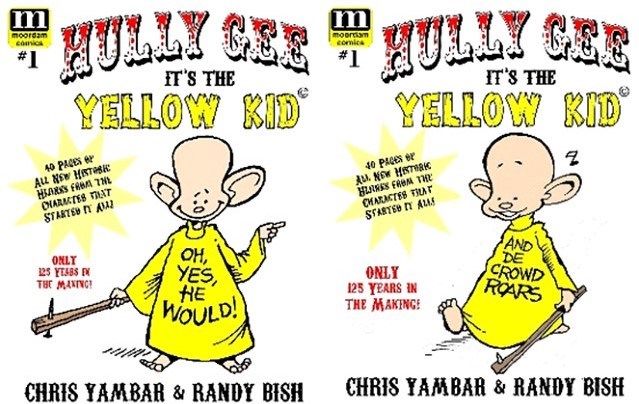 The Yellow Kid character is returning in the full-length comic book “Hully Gee It’s the Yellow Kid,” written by Chris Yambar of Youngstown and illustrated by Randy Bish. Shown above are the two covers for the comic book. (Contributed images)

YOUNGSTOWN — To celebrate its 125th birthday, the iconic Yellow Kid character is returning in its first full-length comic book, “Hully Gee It’s the Yellow Kid,” written by Chris Yambar of Youngstown and illustrated by Randy Bish.

The character became the center of a heated battle between Pulitzer and newspaper tycoon William Randolph Hearst, who wanted the character for his own publication, New York Journal. As a result, the Yellow Kid appeared in both publications at the same time.

The comic strip marked the first use of word balloons, sequential storytelling and multipanel layout and is considered to be a pioneer in American newspaper comic strip history, according to a news release. The Yellow Kid appeared as an advertising icon on everything from whisky and cigars to children’s toys and chewing gum.

Yambar has worked in the comic book industry with characters such as The Simpsons, Mr. Magoo, Popeye and Spongebob Squarepants. His own titles include “Mr. Beat,” “El Mucho Grande,” “Fire-Breathing Pope” and others.

Bish is an award-winning editorial cartoonist from Greensburg, Pa., syndicated by Pennsylvania News Media, Cagle Cartoons and the Fourth Estate. He served as the cartoonist at the Tribune-Review for more than 30 years.

“Hully Gee It’s the Yellow Kid” is 40 pages and includes eight pages of historic reprints of strips from the 1800s.