Believers of the conspiracy theory say the microchips are being used to track people.
Jul 21, 2021 5:45 AM By: Summer Lin | McClatchy 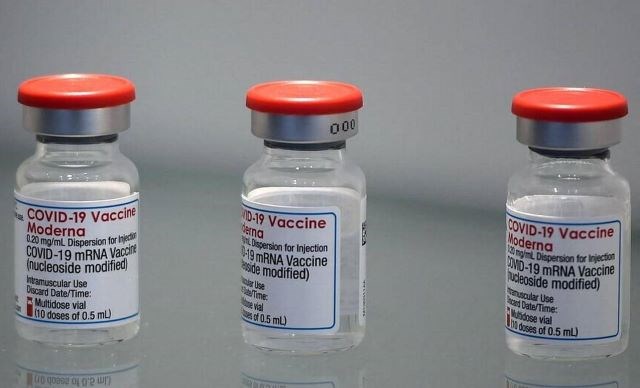 An Economist/YouGov poll found 15% of Americans said it was “probably true” that COVID shots are being used to microchip people, and 5% said “definitely true.” (AFP | Getty Images)

About 20% of Americans believe the government uses COVID vaccines to microchip people, according to a recent poll.

An Economist/YouGov survey conducted July 10-13 based on a sample size of 1,500 adults found that 15% of respondents said it was “probably true” that vaccines contain microchips while 5% said it was “definitely true.”

The survey’s margin of error is plus or minus 3 percentage points.

A conspiracy theory that suggests COVID vaccines contain microchips or other metals in order to track people has been debunked by experts, but that hasn’t stopped people from posting videos of magnets sticking to their arms due to oils or tape, McClatchy News previously reported.

“No. Receiving a COVID-19 vaccine will not make you magnetic, including at the site of vaccination which is usually your arm,” according to/ the Centers for Disease Control and Prevention.

The survey also found that 15% of respondents said the majority of “unvaccinated Americans have a good reason for not being vaccinated” while 64% said they didn’t have good reasons and 22% were unsure.

U.S. Surgeon General Dr. Vivek Murthy said in an advisory released last week that misinformation about the COVID pandemic is a “serious threat to public health.”

Murphy said at a Thursday press briefing that the slowing rate of vaccinations can be attributed to misinformation, CNN reported.

“It’s one of several reasons why people are not getting vaccinated, but it’s a very important one, because what we know from polls ... is that two-thirds of people who are not vaccinated either believe common myths about the COVID-19 vaccine or think some of those myths might be true,” Murthy said.

The recent spike in COVID-19 cases across the country has fueled by vaccine hesitancy and the delta variant, which was first discovered in India and has spread to multiple countries.

Rochelle Walensky, director of the CDC, said in a Friday briefing that more than 97% of people who are getting hospitalized with COVID are unvaccinated, CNN reported.

“This is becoming a pandemic of the unvaccinated,” Walensky said.

More than 186 million people in the U.S. have received at least one dose of a COVID vaccine as of July 19, including more than 161 million who are fully vaccinated, according to the CDC.