The Sojourn to the Past travelers will visit Alabama, Mississippi, Arkansas and Tennessee.
Jul 22, 2021 2:45 PM By: Mahoning Matters staff 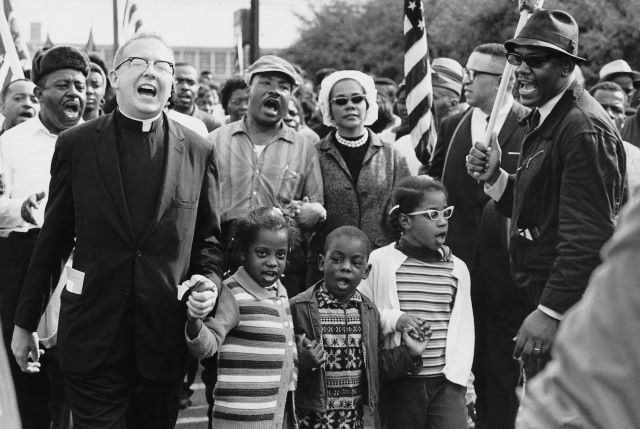 Civil rights movement co-founder Ralph David Abernathy, his wife, Juanita Abernathy, and their children follow Dr. Martin Luther King Jr. on the front line of the Selma to Montgomery march in 1965. Saturday, Mahoning Valley Sojourn to the Past will take 18 Valley students on a tour of civil rights historic sites, including the Edmund Pettus Bridge in Selma. (Photo courtesy of Abernathy Family Photos)

YOUNGSTOWN — Civil rights history is about to come to life for 18 Mahoning Valley students.

On Saturday, Penny Wells, executive director of Mahoning Valley Sojourn to the Past, will take a group of 18 students on a journey to the civil rights sites in the South.

Wells and her group will fly from Pittsburgh to Birmingham, Ala., then take a bus to Montgomery.

There, they will visit the Legacy Museum, sometimes referred to as the Lynching Museum. Students will be looking for the jar of dirt collected by Sojourn students in November 2019 at the site of the lynching of a Black man, William Taylor, more than 100 years ago in Sandusky.

The next stop will be the memorial, which lists the names on rectangular monuments of people lynched by county if a southern state and by state if a northern state. Fifteen people are known to have been lynched in Ohio.

The group will sit on the Alabama capitol steps where they will read and reflect on Dr. Martin Luther King Jr.’s speech delivered at the end of the Selma to Montgomery march in March 1965. They will touch the names of individuals on the Civil Rights Memorial who were killed due to racial hatred.

The students will be able to add their names to the Wall of Tolerance, promising to work for social justice.

Wells said the group will walk across the Edmond Pettus Bridge in Selma just as the marchers did on Bloody Sunday when they were attacked by state troopers.

The students will view the civil rights mural commissioned by Mahoning Valley Sojourn to the Past students and erected with money raised in Youngstown in 2020.

In Birmingham, they will visit the Sixteenth Street Baptist Church where the Children’s March began.

Then they will walk across the street to the Kelly Ingram Park where children were arrested, attacked by police dogs and sprayed with fire hoses.

Janice Wesley Kelsey, who participated in the Children’s March and spent several days in jail, will speak to the group about her experiences.

The group will hear the lesson of the girls who died when the Sixteenth Street Baptist Church was bombed by the Ku Klux Klan and meet the family of Lisa McNair, one of the girls who was murdered. They also will meet Sarah Collins Rudolph, who survived the bombing but lost most of her sight in the blast.

In Mississippi, they will sit in the driveway where Medgar Evers was shot and died. They will meet investigative reporter Jerry Mitchell, who is responsible for helping to bring to justice the murderers of not only Evers but a number of other civil rights victims.

In Little Rock, Ark., the students will listen to Elizabeth Eckford, one of the Little Rock Nine, describe her horrific experiences when she went to Central High School on the first day of integration in 1957.

The Sojourn journey will end in Memphis, Tenn., at the Lorraine Hotel where King was assassinated April 4, 1968.