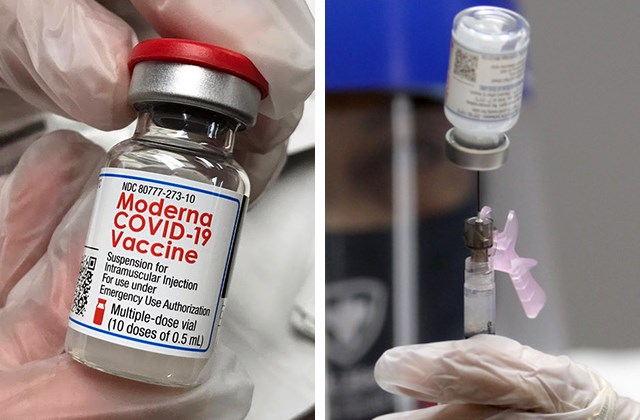 As more Americans line up to receive their COVID-19 vaccines, there’s confusion over just how protective the shots are against the disease.

Clinical trials showed the Pfizer and Moderna shots, for example, had efficacy rates of about 95 percent against symptomatic COVID-19 in lab settings.

So, that means 5 percent of people who get vaccinated could still get sick, right?

No — it also doesn’t mean vaccinated people have a 5 percent chance of getting COVID-19 or that 95 percent of people are protected from the disease. Data suggests risk of infection after vaccination is actually much lower.

Efficacy tells us about risk reduction, so people who get vaccinated with the Pfizer or Moderna shots benefit from about a 95 percent lower risk of developing COVID-19 compared to those who are not vaccinated.

Still confused? Think of it this way.

Breaking the math down helps

About 36,000 people were involved in Pfizer’s late-stage vaccine trial in which about half received the shot and another half a placebo. In total, 170 people developed symptomatic COVID-19 — 162 in the placebo group and eight in the vaccine group.

But even this explanation is misleading, according to Dr. Akiko Iwasaki, a virus expert at Yale University.

“If you were to ensure that the 18,000 people all got exposed to the virus, then yes, the vaccine efficacy would be incredible, right? But they’re not,” Iwasaki told Business Insider. “That’s why we have to compare the vaccine arm with the placebo arm, because the placebo arm is what tells us how much exposure and infection there would have been, if they weren’t immunized with the vaccine.”

“That’s where the 95 percent comes from,” Iwasaki said.

The same process applies to the Moderna and one-shot Johnson & Johnson vaccines.

That makes the Pfizer and Moderna vaccines “one of the most effective vaccines that we have,” Brianne Barker, a virologist at Drew University in New Jersey, told Live Science.

For comparison, the flu vaccine is between 40 percent and 60 percent effective, depending on the version of the virus that’s circulating in a given year, the Centers for Disease Control and Prevention says. Yet, the flu vaccine prevented an estimated 7.5 million flu illnesses, 105,000 hospitalizations and 6,300 deaths during the 2019-20 season.

The Johnson & Johnson COVID-19 shot is just as effective at preventing severe COVID-19 infections compared to the other coronavirus candidates, experts say. But it’s easy to not understand why given late-stage trials showed the shot had a lower efficacy rate (72 percent) compared to Pfizer and Moderna among Americans.

That’s because it had a very different clinical trial than those of the Pfizer and Moderna shots; Johnson & Johnson was up against the new coronavirus variants that appear to be more contagious and evade vaccines to a small degree. Pfizer and Moderna completed their clinical trials before the variants emerged from the U.K., Brazil and South Africa.

While clinical trials give us the vaccines’ efficacy rates, they do not reveal the shots’ “effectiveness,” which is how well the vaccines protect against COVID-19 in real-world settings outside of the lab. However, emerging evidence suggests the vaccines are performing just as well now that millions in the general population have been vaccinated.

A CDC study posted last week found that risk of coronavirus infection dropped by 90 percent two weeks after receiving a second and final dose of the Pfizer or Moderna vaccine, and by 80 percent two weeks following a single dose among nearly 4,000 health care workers, first responders and other essential workers across six states.

Overall, it suggests vaccines can prevent both asymptomatic — without symptoms — and symptomatic infections among vaccinated people.

Katie Camero is a McClatchy National Real-Time Science reporter based in Miami. She’s an alumna of Boston University and has reported for the Wall Street Journal, Science and The Boston Globe.