'A COUP ATTEMPT' | Valley reflects on insurrection at U.S. Capitol

As Congress went about its ceremonial business of certifying election results Wednesday afternoon, a mob of pro-Trump rioters invaded the U.S. Capitol, resulting in the death of at least one woman.
Jan 7, 2021 3:52 AM By: Mahoning Matters staff 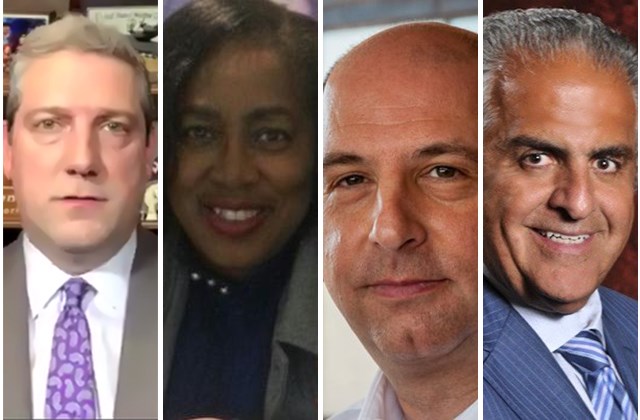 WASHINGTON — As insurrectionists invaded the U.S. Capitol on Wednesday afternoon, Youngstown State University Professor Paul Sracic was thinking about a U.S. State Department-sponsored lecture he gave to an Afghani delegation in 2016.

He recalled telling the group, "We're an old democracy." Even the election of Donald Trump, a man with no political history, will not threaten the country's history of peaceful transitions of power, he told them.

"That's what really got called into question today," he told Mahoning Matters on Wednesday night. "That's the image that's most disturbing to me."

He could be referring to a number of images: people sheltering in the House gallery as pro-Trump rioters attempt to break in; police drawing guns toward the barricaded doors of the House Chamber; or police holding back rioters as they storm the massive wooden doors of the Capitol Building.

As Congress went about its ceremonial business of certifying election results Wednesday afternoon, a mob of pro-Trump rioters invaded the U.S. Capitol, during which one woman reportedly died.

The day, Sracic said, was "horrifying," and he wasn't alone in his reaction; even Republican Gov. Mike DeWine — who has bent over backward to avoid criticizing Trump — called the events "an embarrassment to our country."

Bill “Doc” Binning, a former Youngstown State University political science professor and former chairman of Mahoning County’s Republican Party, called Wednesday a “terrible, tragic” day, the likes of which he hasn’t seen across his more than four decades in politics — “people out of control … fueled by the politicians, fueled by Trump, fueled by Bill Johnson.”

Binning said he worries whether violent demonstrations will become a political norm, citing the summer’s anti-police brutality riots in Portland, during which the city’s federal courthouse was set on fire.

“We’ve never seen anything like this. There’s violence and a takeover of the Capitol. … ” Binning said. “It’s becoming a common way of practicing politics on both sides, and it’s very dangerous.”

“Anyone that’s an American should be upset. If this doesn’t hit you viscerally, I don’t know what will.”

U.S. Sen. Rob Portman of Cincinnati, R-Ohio, late Wednesday condemned the Capitol riots on Twitter and called for Trump to "embrace the peaceful transfer of power."

"These shameful actions to disrupt a session of Congress and vandalize the Capitol building should never happen in our great republic," he wrote.

During the meeting, 6th Ward Councilwoman Anita Davis held up a miniature book containing the Declaration of Independence and the U.S. Constitution she carries with her.

“I have sworn to uphold the Constitution of the United States of America, and I can tell you just how terribly angry I am at what has taken place today," she said. "I want every single person who was involved in this brought to justice immediately.”

Betras agreed and said he expects prosecutors should be able to draw footage from cameras in the Capitol to identify agitators and bring them to justice.

“The people that stormed the Capitol — they’re not patriots; they’re traitors to America,” Betras said. “There’s no two sides to this. You’re either on the side of the Constitution or you’re on the side of a dictator."

Based on statements of two Ohio federal prosecutors, prosecutions are likely, especially if you traveled to D.C. from Ohio and broke the law.

Justin Herdman, U.S. Attorney for the Northern District of Ohio, echoed his sentiment.

"I have two days left on this job. I can go with very little sleep in that remaining time. If these people, or anyone else who committed federal crimes at the Capitol today, are from northern Ohio, you are going to be held accountable before I leave office. Coffee is brewing…” he tweeted Wednesday.

Officials are also calling for an investigation of Capitol security after insurrectionists appeared to stroll into the Capitol.

U.S. Rep. Tim Ryan of Howland, D-13th, said law enforcement charged with protecting the U.S. Capitol and Congress members during the riots made some "strategic mistakes from the very beginning" and called for a review of the building's defense.

Ryan said he and other representatives sheltering in their offices received police alerts to "lock your doors; stay away from windows; there's a bomb threat."

'HOW DID THIS HAPPEN?'

Ryan said legislators watched mobs roving the Capitol’s Statuary Hall on C-SPAN, trying to push their way into the buildings. Their offices, however, were secured. His phone started “blowing up” with calls from his wife and family members, he said.

Ryan, like the reporters questioning him Wednesday evening, saw the same videos of rioters overrunning Capitol Police; rioters being allowed through a barricaded area; rioters taking selfies with police inside the Capitol.

Ryan said he was told at least 1,300 Capitol Police officers were on-hand Wednesday — as were Washington D.C.’s metropolitan police, SWAT, the National Guard and Vice President Mike Pence’s Secret Service detachment — and wondered why it took so long to clear the building, and how rioters even reached the building at all.

According to Ryan, demonstrators shouldn’t be able to reach the Capitol steps.

"How did this happen? There were clearly enormous strategic and planning failures by the Capitol Police, by the Sergeant at Arms and anybody else who was a part of coordinating this effort," Ryan told reporters during a virtual briefing Wednesday evening.

"This is the United States Capitol Building, with the United States Congress in session handling the presidential election process,” he continued. “And we knew — Donald Trump signaled this on Dec. 19, about how Jan. 6 was gonna be a 'hell of a day.' There was enough time to prepare.”

Though Ryan said he expected Wednesday’s riots may turn off some Trump voters, he expects the outgoing president will retain “some control” over the Republican base.

Ryan said he spoke to one “moderate” Republican legislator during the Capitol Building lockdown, who told him continuing the electoral objections now would be “insane.”

When questioned by a 21 WFMJ-TV reporter on local viewers' concerns that police response would have been stronger had the riots been led by Black Lives Matter, Ryan said "if that was a group of Black people, this would have been handled a lot differently — there's no question."

"If Black people were storming the Capitol, they would have been treated so much differently. What happened today was appalling," he said, reiterating that lawmakers would be "reviewing everything that happened here."

"This was an insurrection in the United States. There's no sugarcoating that. This was a coup attempt," Ryan told reporters Wednesday night. "The president wanted a mob to storm the Capitol and stop the vote count because he lost the election.

"Then, what's next? It's just sickening to think we've gotten to this point in our country."

Ryan said he supported a second round of impeachment proceedings for Trump for appearing to incite the Wednesday protests, which reportedly left one woman dead. By Wednesday night, Twitter, Facebook and YouTube had suspended Trump's accounts for his role and for repeatedly making false claims about the election results.

"I think he needs to be removed from office because we can't trust him over the course of the next couple of weeks," Ryan said. "Somebody died today. Members of Congress were on the floor ... with gas masks on.

“I think it’s dangerous for the president to continue to have the enormous power the people have given him as president. To be able to have that power as president over the next couple weeks could make matters much, much worse.”