A family affair: Many in Valley rooting for the 'local' team

Denise DeBartolo York and John York will bring a bit of Youngstown with them to South Beach as the 49ers square off against the AFC champion Kansas City Chiefs on Sunday.
0
Jan 30, 2020 4:25 AM By: Jon Gold 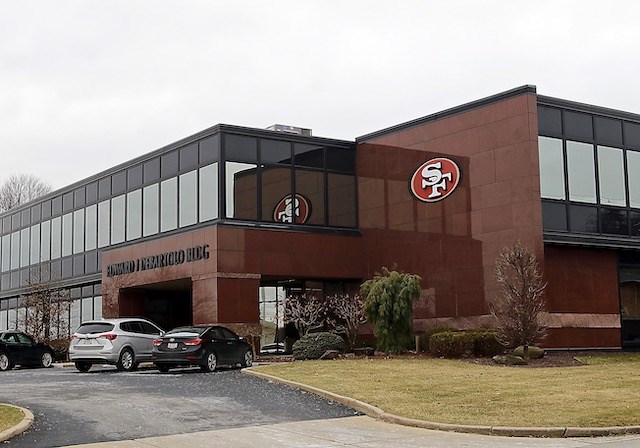 The DeBartolo Corp., 7620 Market St., Boardman, features three flag poles out front that display the U.S. flag, the state of Ohio flag and and a San Francisco 49ers flag. It is also marked by a 49ers emblem. (Photo by Robert K. Yosay)

On Sunday, California’s Bay Area won’t be the only region represented by the San Francisco 49ers at Super Bowl LIV in Miami.

Depending on who you poll, the Mahoning Valley is most certainly either Cleveland Browns or Pittsburgh Steelers country. But if there is a clear-cut second-tier favorite NFL team among local residents, it must be the locally owned 49ers.

Denise DeBartolo York and John York will bring a bit of Youngstown with them to South Beach as the 49ers square off against the AFC champion Kansas City Chiefs on Sunday.

“The 49ers are ingrained in the culture of the Mahoning Valley,” U.S. Rep. Tim Ryan of Howland said. “If you’re my age, in your 40s, you grew up as a kid watching Joe Montana and Roger Craig and Jerry Rice. These were national superstars, but the curtain got pulled back for us, and we’d get the local coverage of Eddie DeBartolo Sr. and Carmen Policy, the masterminds of putting the organization together, and the local ethic family culture they brought to the team.”

But with the 49ers almost annual guests for the past few years, the Mahoning Valley feels a deeper connection to a franchise 2,500 miles away.

At team CEO Jed York’s direction, the team has stayed in Youngstown during back-to-back East Coast road trips three times in recent years. They’ve chosen to bunker down at Youngstown State University rather than fly all the way back across the country, practicing at Stambaugh Stadium, using the athletic department facilities, staying in local hotels and dining at local restaurants.

Imagine a female golfer’s surprise when she looks one treadmill over at the Watson and Tressel Training Site (WATTS center) and sees Jimmy Garoppolo getting some extra cardio in. Picture Richard Sherman and Nick Bosa grabbing a bite at a local Chipotle.

“I’ve heard stories that some of the 49ers were in our swimming pool rehabbing,” Strollo said. “It’s pretty neat for our kids. For the most part, as high-demand as an NFL team is, they’re humble as an organization. It’s not like they request a lot. We try to provide what we can, then they move on. But there are some interactions, and I'm sure it’s something (our athletes) will never forget, especially this year.”

Back in the Super Bowl for the first time since 2013, the 49ers stunning turnaround has both surprised and delighted local fans. After retooling their defensive front seven, the Niners improved from a 4-12 record in 2018 to 13-3 this season.

For a community, either despondent after decades of misery (Browns fans) or down after a recent string of bad fortune (Steelers fans), the 49ers’ resurgence has been a boon.

At least, to most.

Asked about the 49ers' Super Bowl appearance and its relation to the local community, U.S. Sen. Sherrod Brown, a noted Cleveland Indians fan, said in a statement to Mahoning Matters: “I’m just rooting for spring to get here quickly, so we can kick off baseball season and the Tribe’s next quest for a World Series.”

Others are a bit more passionate about the gridiron game.

“Football is a part of the culture here,” Ryan said. “It’s Friday Night Lights, it’s the competition, it’s (about) trying to pass it along to the kids, and trying to have it reinforced with championship-level football by a family of locals. It’s really a big deal. It’s our culture they brought to the 49ers. That’s the championship culture.”

"... One of my teammates from college was Jon Gruden, and he was the assistant quarterbacks coach for the 49ers when (Joe) Montana and (Steve) Young were there, when Mike Holmgren, Ray Rhodes and George Siefert were there," said Husted , a University of Dayton graduate where he played on the Dayton Flyers football team. Gruden went on to lead the Tampa Bay Buccaneers to a title in Super Bowl XXXVII.

"When you're hanging in San Francisco and being an NFL player, you might have one world view, but if you come to the Mahoning Valley, you get a sense of who football fans really are, people who care about what you do," Husted added. "That's very grounding and inspirational from my point of view."

Ryan pointed to the NFL Health and Safety Committee’s symposium held last November at America Makes at the direction of 49ers co-chairman John York as another sign of continued commitment to the region.

York not only made it a priority to address an issue that has plagued the league in recent years — the health and well-being of its players — but to do so in Youngstown, hoping to help boost the local economy. It was announced during the symposium that nearly $2 million in grants would be awarded to develop prototype 3D-printed helmets to be made locally.

“That’s a great example of the tie between the DeBartolos, the Yorks, Youngstown and the NFL,” Ryan said.

“They brought our culture from the Mahoning Valley to the organization,” Ryan said. "The DeBartolo family, now the York family, really made the San Francisco 49ers a part of our community as well.”

— Jon Gold is a freelance features writer based in New York City whose work has appeared on ESPN.com and in Billboard Magazine and the Washington Post.

FirstEnergy to purchase 250 trucks from Lordstown Motors
Feb 26, 2020 9:24 AM
Comments
We welcome your feedback and encourage you to share your thoughts on this story. We ask that you be respectful of others and their points of view, refrain from personal attacks and stay on topic. To learn about our commenting policies and how we moderate, please read our Community Guidelines.