The YOUprint 2030 plan is divided into five-year segments to see which goals are hit or where improvements are needed. Academic Distress Commission Chairman John Richard said commissioners will focus on the implementation of it in future meetings.
Nov 26, 2020 5:15 AM By: Ellen Wagner 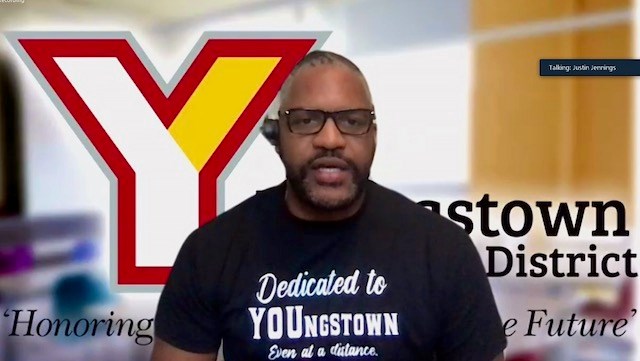 CEO Justin Jennings said Youngstown educators and administrators created the plan to focus on improving the district today as well as the next 10 years.

“For far too long, the children of Youngstown have started their academic careers behind the starting line. Our goal is to coordinate our existing district resources to ensure they are prepared to be responsible citizens of the 21st century,” Jennings said in a news release. “This plan represents a watershed moment in the way we will educate Youngstown’s scholars now and in the future.”

YOUprint 2030 outlines how the school district should serve students in the future and the system-level changes needed to get there.

Jennings said the plan will be updated if changes need to be made and progress will be noted. The school board and commissioners will also be updated as the plan changes throughout the year.

“This is a living, breathing document,” Jennings said.

At the beginning of 2020, Youngstown City Schools had internal and external members of the district give SWOT analysis feedback, which included employees, parents, alumni, community members, homeowners and other stakeholders in the district.

The responses were able to be used to create goals for improvement over the next five years, which the district will evaluate the improvement through an evaluation every year.

The four strategic goals created are:

According to a release from the district, the plan is built on a more detailed, more rigorous curriculum outlined in specific technical documents such as curriculum guides, the ONE PLAN (District/School Improvement Plans), and the Ohio Department of Education Learning Standards.

Utilizing this precise curriculum, the school district's educational team will work collaboratively to ensure the concepts and skills outlined in the ODE Learning Standards will increase student engagement and continuous academic achievement.

The district will also follow evidence-based educational practices and cultivate partnerships with parents and the community to have students meet and surpass state educational standards, according to the news release. The district is also committed to embracing diversity and inclusion practices and ending systematic racism. It will also continue to incorporate restorative justice practices to resolve student conflict before exploring punitive discipline.

Students will continue to have guidance for post-secondary education to attend college, career-technical programs or other avenues to prepare them to become adults.

Jennings said the plan is divided into five-year segments to see which goals are hit or where improvements are needed.

“Our focus is for the first five years, look at where we are in the benchmarks we hit and what we can improve over the next five years,” Jennings said.

Jennings first began discussing the finalization of the YOUprint 2030 plan in August. Academic Distress Commission Chairman John Richard said the approval of the plan was delayed to make sure the district created this plan correctly.

“You can put anything on paper you can pass a resolution you can adopt a plan,” Richard said during the meeting. “It's only as good as follow-through and implementation.”