ACTION leads effort to send meals to seniors during pandemic

Out-of-work cooks are whipping up weekly home-delivered meals for seniors; Ohio aging officials are putting up $8.8 million to meet increased demand.
Apr 3, 2020 3:52 AM By: Justin Dennis 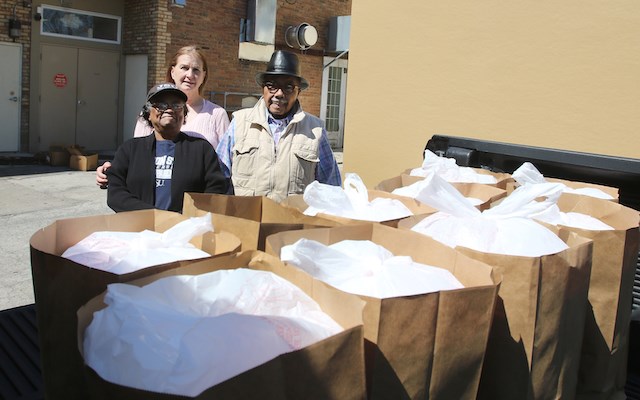 YOUNGSTOWN — Though Cultivate Cafe decided to close due to the COVID-19 pandemic, its manager Susan Payton and other cafe workers were on the line cooking 250 nutritious meals that were delivered to area seniors and their families Thursday afternoon.

Alliance for Congregational Transformation Influencing Our Neighborhoods, or ACTION, the community advocacy group founded by Rose Carter, put some of its three-year, $30,000 public health grant from the Evangelical Lutheran Church in America toward distributing meals to those most vulnerable to the disease.

Janet Schueller, a dietitian who coordinates ACTION’s grant-funded Healthier You program, said this year’s funding was supposed to be put toward healthy nutrition programming like an interactive cooking class, but the onset of COVID-19 created a more urgent need.

The group brought on Payton — a 35-year food service worker and caterer — Monday to kick off a weekly series of healthy meals to go right to seniors’ doorsteps — but which were also inexpensive, as to not overburden ACTION’s grant funding — and in just three days she was ready to light stovetops in the Common Wealth Kitchen Incubator’s freshly sanitized kitchen.

“At this time, this is really the best way because there’s so many people that are living below the poverty line that aren’t able to be out to get what they need,” Payton said.

Even those who can — like Payton, who this week sought out fresh yet inexpensive vegetables and protein to stretch the grant dollars — are only finding empty store shelves, or purchase limitations.

“Guess what? You can’t find pasta. … They don’t have any green beans,” she said.

“That has been a really big stressor. … But I’m gonna’ sniff it out wherever it is.”

On the menu Thursday was roasted, Italian-seasoned chicken, red-skinned potatoes, mixed vegetables — some which were donated by Scarpaci’s Produce of Warren — and a dinner roll.

“We’re not skimping on quality. Everything [was] made from scratch — no processed foods,” Payton said.

Volunteer drivers picked up the bagged meals in a drive-thru line and delivered them to 250 seniors who are part of Lutheran congregations in the area and groups that already participate in ACTION nutritional programs — with as little physical interaction as possible. Also served were those living with the seniors.

Cultivate Cafe’s small staff — many of whom Payton said are currently ineligible for unemployment — also got a few hours of pay Thursday.

Schueller said ACTION wants to make weekly deliveries — possibly every Thursday — for the next six weeks.

Another $8.8 million in COVID-19 relief funding from the Ohio Department of Aging is also headed to meet the growing demand for meal assistance by older Ohioans across the state, the department announced Thursday.

“Thanks to these dollars, our [agencies] will be able to address waiting lists, expand the number of people receiving home-delivered meals, reach those who previously participated in congregate meals and provide additional meals per day or per week,” said Ursel McElroy, the state’s aging department director.

Direction Home is already coordinating more than 200,000 home-delivered or congregate meals for seniors each year in that region, but it’s finding more seniors now qualify for home-delivered meals because they’re homebound due to the pandemic, she said.

Seniors interested in signing up for home-delivered meals can contact one of the agency’s four providers, whichever is closest:

Direction Home — which now has 150 employees working from home — is also cold-calling seniors and checking to see if they qualify for services that can help during this time, Valentini said.

“It’s a slow start to it, but I think that people are realizing … there’s this agency that can help them. They’re more open to it,” she said.