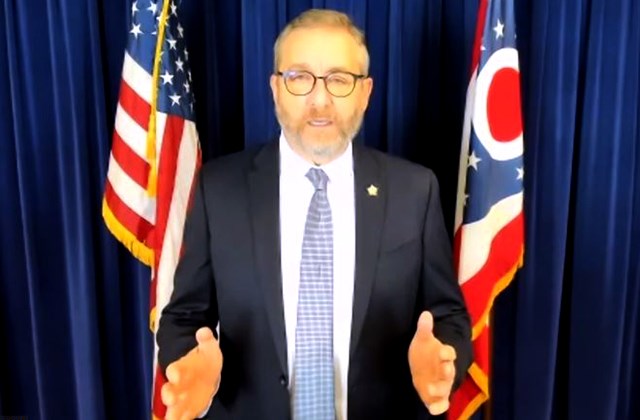 COLUMBUS — Attorney General Dave Yost on Wednesday announced his office is suing to keep Ohio House Bill 6's nuclear bailout funds — a "substantial amount" of the $1.3 billion to be collected from Ohio electricity ratepayers starting next year — out of the hands of Energy Harbor, the former FirstEnergy Corp. subsidiary that owns the two failing plants.

"It is essentially ill-gotten gains," said Yost, speaking to reporters during a virtual media briefing Wednesday. "Corrupt activity should not result in a monetary advantage."

But the attorney general's civil suit, which was filed Wednesday in Franklin County and runs parallel to the federal criminal racketeering suit now facing former Ohio House Speaker Larry Householder and others, won't stop those fees from being collected.

Yost said Wednesday he's counting on state legislators to repeal and replace Ohio House Bill 6 by the end of the year, which may remove the rate hikes approved in HB 6 or otherwise redirect them. The legislature has an Oct. 1 deadline to approve the replacement measure, according to the Associated Press.

Barring that, Yost said his office may later seek a preliminary injunction to stop the new charges from appearing on Ohioan's electricity bills after Jan. 1.

Householder, several of his associates and a so-called "dark money" nonprofit allegedly operated by Householder have been accused in a $60 million racketeering scheme, one of the largest in state history, investigators said.

Yost's lawsuit, which names FirstEnergy Corp., Householder and various other organizations connected to the alleged racketeering scheme, would also stop those individuals and entities from being involved in the General Assembly's fall campaigning season — including cashflow restrictions on Householder's political committee — and prevent those entities from lobbying for the next eight years.

FirstEnergy has not been criminally charged in the federal case.