A group calling itself “White Lies Matter” says it has stolen the Jefferson Davis Memorial Chair and will turn the stone relic into a toilet unless its demands are met.
Apr 8, 2021 5:45 AM By: Tanasia Kenney | McClatchy 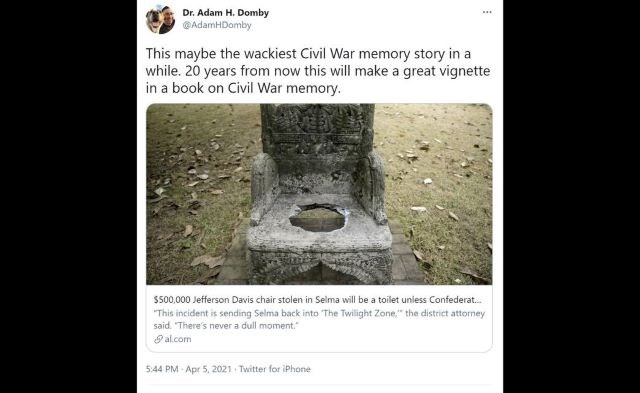 A group calling itself “White Lies Matter” has claimed responsibility for stealing the Jefferson Davis Memorial chair from an Alabama cemetery and is holding it for ransom, emails say. (Screengrab from Adam Domby | Twitter)

A Confederate monument that disappeared from an Alabama cemetery last month is being held for ransom.

A group calling itself “White Lies Matter” says it has stolen the Jefferson Davis Memorial Chair and will turn the stone relic into a toilet unless its demands are met, according to emails reportedly sent to AL.com and The Montgomery Advertiser this week.

The group isn’t seeking cash, but instead demands that the United Daughters of the Confederacy hang a banner bearing a quote from Assata Shakur outside its headquarters in Richmond, Va. The organization wants the sign to go up Friday — the 156th anniversary of Gen. Robert E. Lee’s surrender in the Civil War, the Montgomery Advertiser reported.

“If they do display the banner, not only will we return the chair intact, but we will clean it to boot,” the group wrote, according to the newspaper. “For all that talk about heritage, they really haven’t taken care of the thing.” Refusal to hang the banner will result in the “ornate stone chair immediately being turned into a toilet,” the email continued.

McClatchy News reached out to the United Daughters of the Confederacy on Tuesday and is awaiting response.

The monument, a carved stone chair dedicated to the former president of the Confederacy, was reported missing from the Old Live Oak Cemetery in Selma in March, AL.com reported. Dallas County District Attorney Michael Jackson told McClatchy News that Selma police are aware of the ransom and working to get alleged footage of the theft.

In its note, the “White Lies Matter” group called on UDC to hang a banner with a quote from Shakur that reads: “The rulers of this country have always considered their property more important than our lives,” the Associated Press reported.

Shakur is a former member of the Black Liberation Army who was convicted in the murder of a New Jersey state trooper in 1977. She escaped federal prison in 1979 and fled to Cuba, where she was granted asylum by then-Prime Minister Fidel Castro.

By taking the Jefferson Davis memorial, “White Lies Matter” said it hoped “to creatively address the argument surrounding Confederate monuments,” according to the AP.

“Many in this country seem more concerned with violence against things than violence against people,” the group wrote, “as long as they can continue to convince themselves those people are just things.”

Jackson said the demands are like nothing he’s heard before.

“Nobody knows what to make of this — it’s just really strange,” he told The Washington Post in an interview. “But you get used to ‘The Twilight Zone’ in Selma. Rod Serling would have a good time if he were down here himself.”

Authorities are now offering a $5,000 reward for information on the whereabouts of the stolen chair, The Montgomery Advertiser reported.