As Ohio preps for senior vaccinations, DeWine is asked, 'Where's your plan?'

Here's how the governor described the state's planning methodology: "We're on a train. We're putting fuel in it and we're building the train at the same time." He said he expects to announce details Thursday.
Jan 6, 2021 3:52 AM By: Jess Hardin 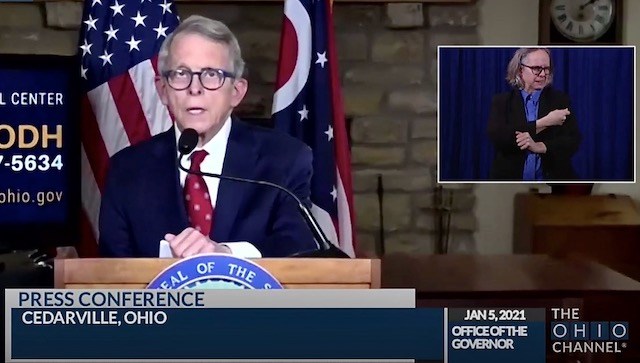 COLUMBUS — Nothing epitomizes the messy rollout of COVID-19 vaccines quite like the agonizing reality of wasted doses.

During his Tuesday briefing, Gov. Mike DeWine described the case of a local nursing home that requested too many doses and had some left over. In its scramble to distribute the remainder, some doses were wasted.

"This was the first time this happened. I'm not happy about it. I'm asking nursing homes to be really careful with their estimates."

The instance reveals a few things. First, skepticism about the vaccine remains unquelled. Secondly, despite the months Ohio had to prepare for this moment, the strategy for distributing vaccines strikes many as disorganized.

As the state prepares to move into its much larger second priority group — older Ohioans, people with medical problems and school staff — Ohioans are looking to DeWine for the plans they've been promised.

Between 75 and 80 percent of Ohio's nursing home residents are electing to be vaccinated. But the rate for nursing home employees hovers at a concerning 40 percent.

In the face of this discouraging statistic, DeWine continues to encourage Ohioans to get the vaccine if they have access to it. He's also been featuring nursing home staff from around the state getting vaccinated on-air during news conferences.

"Some of the commonly cited reasons for the hesitancy have been side effects. People believe it’s too new, so they have safety and effectiveness concerns. Some believe the risks of COVID have been exaggerated. There’s just a general mistrust by some of vaccines and mistrust within the health care system. Some people are worried about receiving or obtaining COVID-19 from the vaccine. And then there are others who just don’t believe they’re at risk of getting the virus," McElroy explained.

Other concerns include the safety of the vaccine for people who are pregnant or trying to become pregnant and worries about a possible immune response to the vaccine in people who have already had COVID-19.

McElroy said the department is working to understand people's hesitation and skepticism to better be able to target efforts at education and distribution, but widespread refusal "complicates our ability to eradicate the virus," she said.

Logistics of group 1B

When Florida officials started to offer vaccines to seniors, people in Fort Myers camped out overnight to get in line, since the county did not offer reservations.

"We are working on a plan that we hope avoids some of the long lines," DeWine said, when asked how the state will avoid the roll-out failures seen elsewhere.

Ohio intends to start vaccinating the 2 million people in group "1B" — Ohioans 65 years of age and older, Ohioans with serious health conditions and school staff — in about two weeks, he said Tuesday.

DeWine said the state expects to receive 100,000 doses in the first week the state moves on to group 1B.

The not-yet-unveiled logistical plan for distributing the vaccines to this group includes establishing drop-in vaccination sites at spots like local fairgrounds and allowing people to make appointments with their health care providers. The state also plans to vaccinate its oldest residents first.

When multiple reporters pressed him for details on a plan the state has had months to flesh out, DeWine got fiesty.

"Well, Jackie," he said, addressing the Cincinnati Enquirer's Jackie Borchardt, "We're on a train. We're putting fuel in it and we're building the train at the same time." He said he expects to announce details Thursday.

After begging state legislators to pass a gun reform bill crafted in the aftermath of the 2019 Dayton mass shooting, DeWine instead signed a bill expanding Ohioans' rights to shoot another person in self-defense.

DeWine reversed course after hinting he might veto the "stand your ground" bill, which eliminates a duty to retreat before firing in self-defense at any place, including businesses, places of worship or protests. Ohio previously only allowed residents to "stand their ground" in their homes and vehicles.

He defended his decision Tuesday, saying he had made a commitment to sign a similar bill when running for governor.

Passage of the bill "puts us in the majority" of states with "stand your ground" legislation, he said.

"I can't express my level of disappointment," Whaley said in a statement Monday. "Gov. DeWine came to our city and stood on stage for a vigil for our murdered friends and neighbors, and then told us he stood with our community in our fight against gun violence. Now it seems he does not."

DeWine Tuesday that signing the "stand your ground" bill does not mean he's giving up on his gun reform proposal, STRONG Ohio.

"Who could be against those things?" DeWine asked.

On Dec. 10, DeWine announced the Ohio Department of Health would provide variances to the state's 10 p.m. curfew for fans attending multiple athletic events including late December Cleveland Browns and Cincinnati Bengals games. That curfew variance did not apply to bars.

But football fans hoping to watch the AFC Wild Card match-up between the Browns and the Pittsburgh Steelers at Ohio bars will be disappointed.

When asked if a variance will be granted for bars showing both the Cleveland Sunday night game or the Ohio State-Alabama NCAA national championship game Monday night, DeWine pointed to the day's data.

"I can't look at these numbers and say that we should expand the time when people can be together, crowd together in a bar or in a restaurant, because at a bar and a restaurant, by definition, you cannot wear a mask when you're eating," DeWine said.

Doing so "would simply add to the spread we already have," DeWine said.

• According to the Pennsylvania Department of Health on Tuesday, there were 673,915 COVID-19 cases in the state which have led to 16,546 deaths. The state said the recovery rate is 70 percent. There have been 6,278 confirmed or suspected cases in Mercer County and 149 deaths; 4.471 cases in Lawrence County and 131 deaths.

• The Rev. David J. Bonnar is set to become the sixth bishop of the Catholic Diocese of Youngstown today. Due to the pandemic, the Mass of Ordination and Installation is not open to the public. The ceremony will air at 2 p.m. on Fox Youngstown and will be livestreamed on the Cathedral of St. Columba’s website and wkbn.com.