There are about 2.2 million Ohioans included in the state's current vaccination phase for the elderly and school workers. The state receives, on average, 146,000 doses of the coronavirus vaccine each week.
Jan 27, 2021 3:52 AM By: Justin Dennis 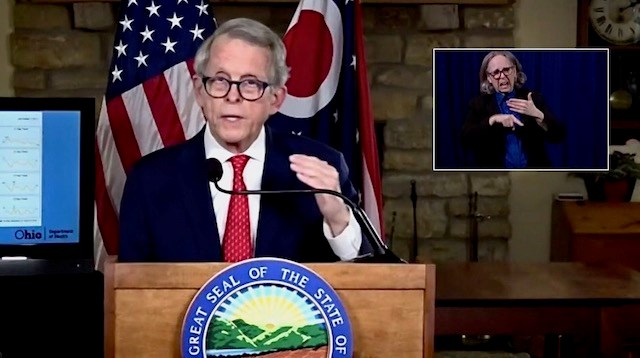 CEDARVILLE — After Gov. Mike DeWine pledged concurrent coronavirus vaccinations for Ohio’s most vulnerable as well as the state’s school faculty and staff, Tuesday’s news that President Joe Biden’s administration intends to boost the vaccine rollout nationwide may be the shot in the arm Ohio needs.

Employees of 46 Mahoning County schools and three Columbiana County schools will also be eligible for the vaccine beginning next week. No Trumbull County schools are included in the state’s first round of vaccine distribution in K-12 schools, which is expected to begin in Cincinnati Thursday, a few days ahead of schedule.

The first round includes about 91,000 eligible teachers and staff, of an estimated 334,000. Due to the scarcity of the vaccine, those vaccinations are expected to take weeks, but the state intends to have at least the first shots administered by the end of February, according to a Tuesday release from the governor’s office.

There are about 2.2 million Ohioans included in the state’s current vaccination phase. The state has received, on average, 146,000 first doses of the coronavirus vaccine each week. That means the state could expect to receive 584,000 vaccine doses by March 1 — or as many as 734,000 pending Biden's Tuesday pledge of increased dose deliveries.

State and local officials have lamented their inability to plan vaccination clinics in advance, citing lack of communication on their vaccine allocations from week to week.

“This is unacceptable,” President Biden said during a Tuesday evening address, promising a “reliable,” three-week forecast of vaccine supply so governors and local officials can “make plans to carry out as many vaccinations as possible.”

President Biden also announced an additional 1.4 million vaccine doses would be distributed each week across the country — up from 8.6 million doses to a minimum of 10 million — at least for the next three weeks.

As vaccine allocations are based on population, Ohio should expect about 50,000 of the 1.4 million additional doses each week.

President Biden also said the nation may soon confirm the purchase of 200 million more doses, and pledged all Americans would have access to the vaccine by the end of summer. The buy increases the nation’s vaccine order from 400 million to 600 doses, enough to fully vaccinate 300 million Americans.

DeWine said Ohio expects to be able to access another 77,000 doses that had been reserved for nursing home staff and residents — doses which would otherwise have gone unclaimed and banked for that vaccination group until March.

Only about half of all Ohio nursing home workers have chosen to take the coronavirus vaccine, he said Tuesday.

As part of a federal nursing home vaccination program, the state was required to set aside more than 300,000 doses for that group. DeWine said the state will now be allowed to draw down 77,000 of those doses over the next two weeks to divert elsewhere.

The latest on Ohio’s curfew

DeWine said Tuesday the state's 10 p.m. to 5 a.m. pandemic curfew could be lifted if COVID-19 hospitalizations drop below a certain level.

If the number of people hospitalized in the state each day for COVID-19 stays below 3,500 for seven straight days, the curfew would be pushed back to 11 p.m. to 5 a.m. for at least two weeks.

"When our COVID hospitalizations are above 2,500, which is more than three times Ohio's peak in a typical flu season, our hospitals strain in their ability to deliver other care, especially routine diagnostic and procedural care," said Dr. Bruce Vanderhoff, Ohio Department of Health’s chief medical officer. "When cases are above 3,500, our hospitals are highly stressed as evidenced by local and regional diversions and the greater need for transfers."

DeWine expects on Thursday to be able to announce the 11 p.m. curfew, as hospitalizations continue to drop. Ohio reported 2,964 COVID-19 patients in hospitals on Tuesday, which has steadily decreased from 3,556 on Wednesday, Jan. 20.

• A new report compiled by the United Health Foundation finds residents in Pennsylvania struggle with obesity, suicide and racial disparities in health outcomes, and the pandemic’s impact could make problems worse. Obesity and suicide rose sharply between 2011 and 2019. Health officials have said the pandemic could exacerbate risk factors for both issues as levels of anxiety, depression and mental distress continue to rise.

• Youngstown State University is focusing spring semester efforts on more COVID-19 testing and vaccines. “My goal would be if everybody that wants to be vaccinated is vaccinated by June,” President Jim Tressel said. “I think that would bode well for us for the fall.”