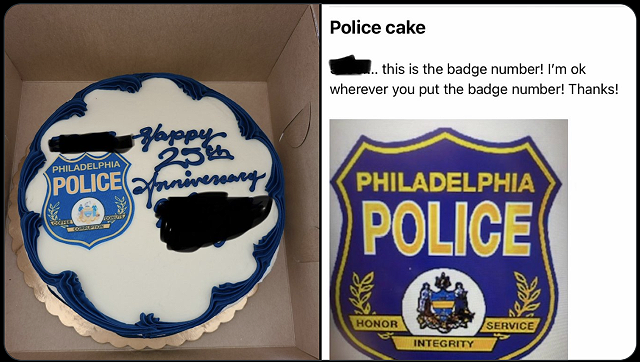 The Bakery House in Bryn Mawr, Pa., said a decorator accidentally printed a Philadelphia police badge that said “Coffee, Corruption, Donuts” on a cake for a customer. (Jaclyn Lee | Twitter)

A Pennsylvania bakery apologized after the owner said one of its decorators accidentally printed an image on a cake mocking Philadelphia police.

Tina Jones, who said she ordered a cake from the Bakery House to celebrate her friend’s 25th year with the Philadelphia Police Department, wanted a badge with the words “Honor, Integrity, Service,” printed on the cake, 6ABC reported.

“I wanted to cry because I’m like, ‘I can’t believe they did this,’” Jones said, according to the station. “That’s so humiliating to put on someone’s cake who is serving 25 years and in a not-so-easy job.”

Sandy Stauffer, owner of the Bakery House, wrote in a Facebook post that the image was “a mistake.”

“One of my decorators did not see the fine print and placed a disrespectful image on the cake. She believed she was choosing a crisper/clearer image. In her haste, it was an image that had been manipulated. No one caught the mistake. This is not who I am! This is not who my staff is. We are beyond mortified,” she wrote.

“I have been part of this community for 32+ years and there is nothing I would do to hurt anyone. I have the utmost respect for all law enforcement and so does my staff. We hope you can find it in your hearts for understanding and forgiveness.”