Under Trump-appointed Postmaster General Louis DeJoy, two of the seven mail-processing machines in Youngstown's main post office are set to be dismantled. Local postal workers said that's not a good idea with 2 1/2 months until the November election.
Aug 18, 2020 3:52 AM By: Justin Dennis 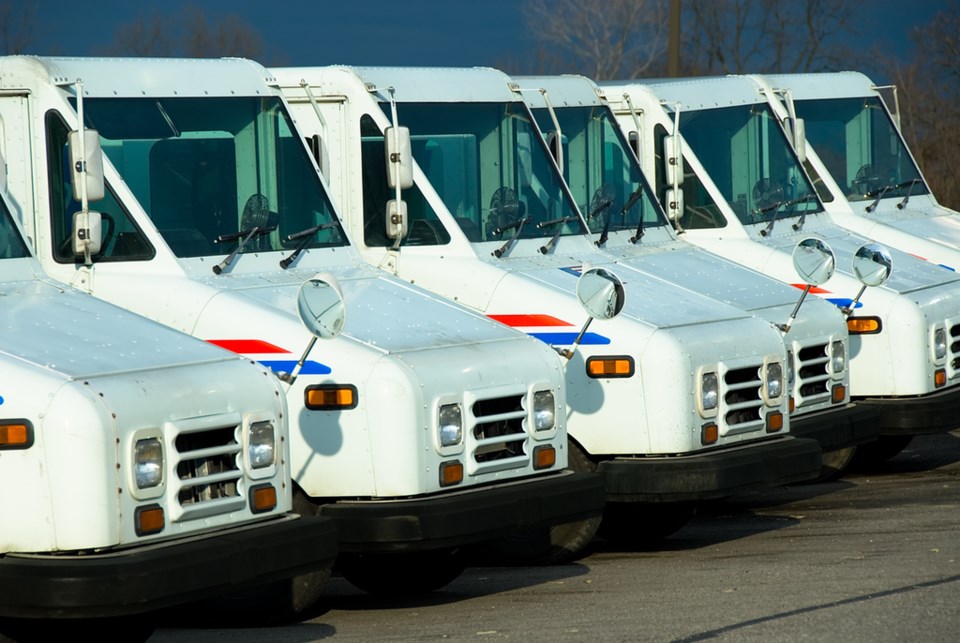 That big blue mailbox on the corner is the latest November election battleground.

Ohio’s Congressional Democrats — and a state Republican — on Monday pushed back against cuts to the U.S. Postal Service by President Donald Trump’s postmaster general, Louis DeJoy, as well as a state ruling limiting counties to one dropbox for the Nov. 3 general election.

This morning, U.S. Rep. Tim Ryan of Howland, D-13th, and local postal workers and letter carriers are set to speak outside Youngstown’s main post office along South Walnut Street, where two of the seven mail-processing machines inside are set to be scrapped — part of a DeJoy-ordered effort to dismantle more than 600 such machines nationwide due to decreased mail volume, said Jim Varner, motor vehicle services director for the American Postal Workers Union Local 443 in Youngstown.

Mailed letters are down about 30 percent since the COVID-19 pandemic began, Varner said. Though a USPS utilization study foresaw the need to scale back mail equipment, the problem is that study was conducted in the spring, when coronavirus was on the upswing and the mail was slow, he said.

“We think those numbers have been skewed at a time when, during the pandemic, of course, the mailing of the letters is going to be significantly reduced,” Varner said. “By scrapping those machines, they’re taking a permanent solution to a temporary problem.”

The Youngstown office’s two machines can sort 25,000 letters an hour. They and the 600 other machines nationwide represent a “significant amount of processing capability” for the USPS, Varner said.

U.S. Sen. Sherrod Brown, D-Ohio, speaking to reporters Monday, said the USPS under DeJoy has removed 50 pieces of equipment from Ohio post offices — “there’s simply no reason they’re doing any of these things aside from helping Trump with the election.”

Though Brown, like others, has seen photos circulating on social media alleging to show mailboxes being removed around the state, he said Monday he was unable to confirm where the photos were taken or the context behind the removals.

Likewise, Varner hasn’t confirmed that any local mailboxes have been permanently removed. He noted a recent Facebook photo alleging to show a worker removing a Warren “collection box.” Varner said he was told that particular box was being replaced.

A USPS spokesperson told NBC News Friday it would suspend mailbox removal until after the election.

At Youngstown’s main office, machines that sort mail bundles by the addresses along each carrier’s route are also being modified to make some routes longer, he said.

“Whatever mail comes in today gets delivered today” is the mantra, Varner said, so postal workers often rely on overtime “to get things done.” But administrators now want to reduce or wholly eliminate overtime, he said.

Sticking to standard pay timetables, trucks delivering the sorted mail are now ordered to leave on-time “no matter what,” even if they don’t have all of the mail, said Varner, a truck driver. Drivers used to be able to wait on a late shipment or a sorting machine that needed repairs. But he said he’s recently been disciplined — one of the few times in his career — for shipping out just a few minutes late.

Just recently, the local office wasn’t able to deliver all the daily mail to several communities because truckers weren’t allowed to wait, he said. That mail stayed at the main office until the next day.

“It’s delaying the mail and it’s especially concerning during the time of an election,” Varner said.

On an average day, an influx of mailed ballots wouldn’t be an issue, he said. USPS handles an average 500 million pieces of mail nationwide each day, and the national APWU has said they’re expecting 100 million mailed ballots in the days leading up to Nov. 3 — though that’s likely an overestimation, Varner said.

“There’s plenty of capacity to get that done, as long as we’re able to continue the operation and have enough revenue to do that,” he said. “And it isn’t artificially slowed down by decisions that would cause delays of the mail. That’s really what we’re concerned about as postal workers.”

Varner said the APWU Local 443 is looking forward to $25 billion in emergency relief included in a U.S. House bill that’s expected to see a floor vote on Saturday.

Brown during Monday’s virtual conference called for Republican senators to push Senate Majority Leader Mitch McConnell, R-Ky., to reconvene the Senate — which is on break until after Labor Day — to address the postal service issue and consider diverting more funds to ready county boards of elections for Nov. 3.

“Our responsibility is to make sure people can vote by mail and vote safely,” he said.

Brown said he feels Ohio Secretary of State Frank LaRose’s decision to allow only one absentee ballot dropbox for each Ohio county in the Nov. 3 general election only serves President Trump’s re-election bid.

LaRose announced the decision during a virtual town hall last week, suggesting allowing more than one dropbox could lead to lawsuits from President Trump, as seen in Pennsylvania.

LaRose, a Republican, said he requested a legal opinion on additional dropboxes from Attorney General Dave Yost, also a Republican, but never received it.

A spokesperson for Yost told The Columbus Dispatch last week the attorney general had prepared to issue that opinion last week, but that LaRose withdrew the request days before the town hall.

“Ohio’s primary this spring provided a number of valuable lessons for election administrators and voting rights advocates to learn how to improve when and how we will vote this fall. Unfortunately, very little has been done by way of translating those lessons into concrete plans of action to safeguard November’s election,” reads their letter. “The actions you take in the next month dictate what millions of Ohioans who vote this fall will understand about the effectiveness and adaptability of its state government, and whether or not it will have risen to the circumstances of the moment or succumbed to being, at best, a cautionary tale for mismanagement.”

The letter cites a recommendation from the federal Election Assistance Commission to install one dropbox for every 15,000 to 20,000 registered voters.

Meanwhile, Yost told Trump Monday any elections changes so close to Nov. 3 could invite litigation, creating "a sense of chaos and uncertainty that will likely roll right into the early voting period — thereby de-legitimizing the thousands of winners in the November contests," reads a letter obtained by The Columbus Dispatch.

Yost noted residents of long-term care facilities, now homebound due to the pandemic, and overseas U.S. troops must rely on the mail-in voting process.

He called for clarification on the Postal Service's improvement plan and any "erroneous reports," as well as postponement of any changes until after the election.

"The people of this country, for the good of the country, need to know that all lawfully cast votes will be timely delivered so that they can be counted. Whatever reform is needed at the Postal Service, it cannot come at the expense of our faith in the 2020 election,” Yost wrote.

WHAT’S THAT MEAN FOR US?

As of Aug. 8, there were more than 358,000 registered voters in the Mahoning Valley — 161,727 in Mahoning County; 132,410 in Trumbull; and 64,272 in Columbiana — according to information from Brown’s office. By the Election Assistance Commission’s standards, the Valley would require at least 15 more dropboxes.

As it stands, the only available dropboxes are those at each county Board of Elections, which were used in the May primary. Those charged with tabulating ballots in what could prove to be the most unusual election year of a generation had mixed feelings about dropboxes.

“I’m absolutely upset about it. I’m surprised no one’s filed a suit about it yet,” said Joyce Kale-Pesta, Mahoning County elections board director. “If I could have them in different parts of the county, in outlying areas … it would make it so much easier on the voters.”

Specifically, Kale-Pesta would be eyeing a dropbox site in Sebring, which is 30 miles outside the city, she said.

Multiple dropboxes would have raised security concerns, she said. Each site would need video surveillance and adequate lighting and would have to be emptied regularly by a bipartisan team of election officials.

“It could prove difficult,” she said. “We’re already spread thin.”

With one box, elections officials can monitor and empty it throughout the day, Penrose said.

Kim Fusco, Columbiana County elections director, said she wouldn’t turn down more ballot dropboxes — “What can it hurt? Dropboxes, I think, are just as secure for boards of elections.”

Absentee voting begins the morning of Oct. 6. That’s when the first round of absentee ballots will be mailed to voters who requested them.

Local boards of elections may process, but not tabulate, absentee ballots up until the polls close at 7:30 p.m. Returned ballots must be postmarked by Nov. 2, the day before the election, to be valid. Any valid, mailed ballots received after that can be tallied while the final vote count is being certified, Fusco added.

Ballots dropped off at local boards of elections, however, must be delivered no later than 7:30 p.m. Nov. 3, when the polls close.

Mahoning County has already received more than 8,500 applications for absentee ballots — “and this is just the middle of August,” Kale-Pesta said.

“People are really anxious to vote this time and they are getting absentee applications in,” she said.

Kale-Pesta said the Mahoning board is even developing a YouTube video explaining the absentee voting process.

“We’re very well-prepared. We’re handling it — extra staff, I’m putting in a phone bank for people requesting [absentee ballots] from us. We’re doing everything we can do,” she said. “The question is will the post office be able to handle it? Our mail now goes from Youngstown to Cleveland, which is a five-day turnaround.”

As always, in-person precinct voting remains an option in Ohio, albeit with a host of new COVID-19 safety precautions.

But for those who don’t want to go out, Penrose, like her counterparts, is urging voters to get their absentee ballot applications in early, and return them as soon as possible.

“Myself and a lot of the other people that work here vote absentee through the mail,” she said, speaking to concerns about the integrity of mail-in voting. “If we trust it, knowing what we do and how the process works, certainly, I think they could trust it.