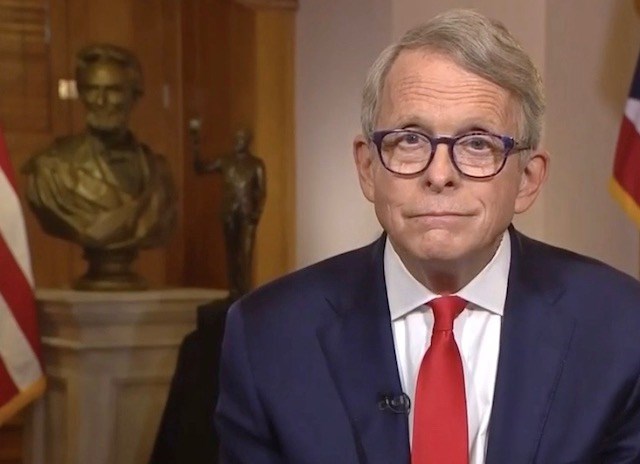 Gov. Mike DeWine during his state address on July 15.

COLUMBUS (AP) — Republican Gov. Mike DeWine — after promising a veto — failed to convince lawmakers Thursday not to pass legislation that would limit the powers of his administration and health officials as the virus’ spread across Ohio reached new peaks.

At hand was a Senate bill that would ban the state Department of Health from issuing mandatory quarantine orders enforced against people who are not sick or exposed to disease — such as the order announced by the governor Tuesday setting a curfew from 10 p.m. to 5 a.m. The bill passed with a 58-to-30 vote on partisan lines.

When the bill reaches DeWine’s desk, he will veto it out of “moral obligation,” he said. The House would then need 60 votes to override a governor’s veto. Both chambers are currently controlled by a Republican majority.

“In national security measures like this, this bill would make Ohio slow to respond to the crisis,” DeWine said. “It would put Ohioans at risk, it would make it hard for this governor or any future governor to do what is necessary for the citizens of this state.”

He added, “This bill is a disaster. This is not a bill that can become law.”

Earlier Thursday, DeWine for the first time designated one of the state's most populous areas, Franklin County, home to Columbus, as a purple zone on the state’s color-coded alert system. The designation is the highest on the state's system and shows the area was flagged for hitting six indicators, including sustained increases in cases and in coronavirus-related hospital admissions.

“This is a sign that we are starting to see a sustained and unprecedented impact on our hospital systems and staff in this area,” DeWine said during his briefing.

Over the past two weeks, the rolling average number of daily new cases in Ohio increased by 107 percent, according to the COVID Tracking Project. In the past week, 1 in every 227 people in the state tested positive. An average of about 7,350 cases have been confirmed per day in the state over the past seven days.

But DeWine says the number is a gross understatement as a large number of antigen tests are starting to slow down reporting because Ohio is “double checking” those positives. As a result, about 12,000 cases have been backlogged since Monday.

While the numbers continued to rise in nearly every corner of the state, Ohio lawmakers convened for a lame-duck session Thursday to vote on the bill DeWine promises to veto and a number of other outstanding bills.

The legislation is the latest instance of a nearly eight-month struggle for DeWine to balance public safety while maintaining a healthy economy.

A statewide curfew went into effect Thursday at 10 p.m. and will remain in effect for 21 days.