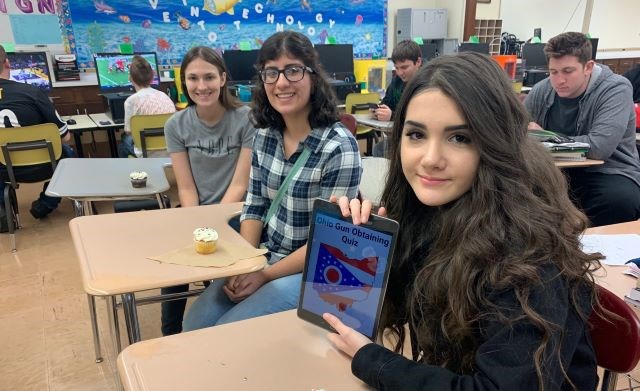 The “Ohio Gun Obtaining Quiz” app, from senior Alara Erzurum and juniors Emma Davis and Ranean Sulebi, gives examples of scenarios that could happen when someone is trying to buy a gun in Ohio. The user goes through a series of yes or no questions, answering whether a person can legally buy or carry a gun in the described scenario. An explanation for the correct answer appears on the screen after the user’s response.

According to the students, the app was inspired by the mass shooting in Dayton on Aug. 4 that left 17 people dead and 27 injured.

“Our students in Northeast Ohio are exceptional and second to none,” Ryan, of Howland, said in a news release. “This app from Emma, Alara and Ranean from Boardman High School not only demonstrates that, but shows our young people are actively engaging with what’s happening in our society.”

“This was definitely a fun experience, and I enjoyed every moment. Even through the trial and error, we were learning and having fun together as a team,” Davis said.

“Each one of us took a part of the challenge that we could excel in; Emma did the coding, Ranean did the research, and I did the filming. We all contributed to the outcome in our own ways. I can’t believe we won, but we did,” Erzurum said.

“Throughout the challenge, our groups’ teamwork grew as we faced challenges in the creation of our app. We had a lot of fun despite the challenges. I believe our group has gained valuable skills, which include problem solving, teamwork and perseverance,” Sulebi said.