Bridging the digital divide in Youngstown is a work in progress

Youngstown ranks 43rd worst in the nation for broadband connectivity, according to one study.
Mar 2, 2020 5:15 AM By: Justin Dennis 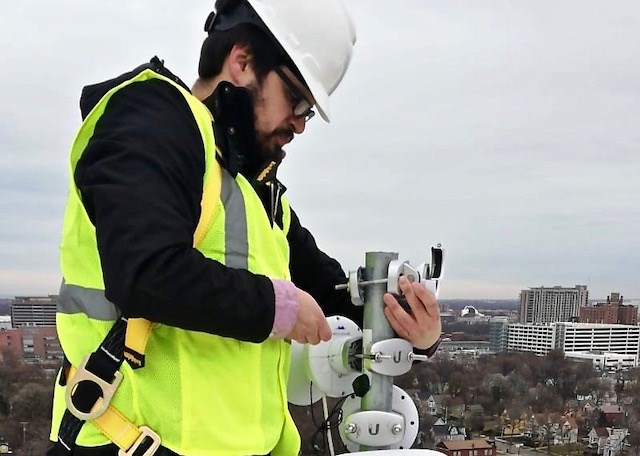 The first time Youngstown library leader Aimee Fifarek noticed how people were affected by a lack of access to the Internet was during the Great Recession of the mid-2000s.

“We had people who were out of work for the first time in their entire adult lives,” Fifarek said. “They were coming into the library and the only way to apply for unemployment insurance was online and they had no idea how to use a computer.

“It’s heartbreaking when you have the primary breadwinner behind the technology barrier he has no idea how to use,” she continued. “There’s a huge segment of the population that might be able to post to Facebook but don’t know about a job website. They don’t have the background knowledge or comfort level, even if they can type and access a web browser.”

Fifarek, now the executive director of the Public Library of Youngstown and Mahoning County, was working at a library in Arizona at the time.

As reported by Eye on Ohio, "digital exclusion" is a combination of several factors: lack of broadband access, digital illiteracy and lack of access to tech support or troubleshooting.

Youngstown ranks 43rd worst in the nation for broadband connectivity, according to a 2018 ranking of U.S. cities by the National Digital Inclusion Alliance. Local advocates and public officials have been working to close the digital access and skills gaps, but said public attitude about digitization needs to adapt as well, and there's no clear path to developing broadband infrastructure in the area.

About a quarter of the 27,783 Youngstown households surveyed by the U.S. Census Bureau reported having no broadband internet connection, according to the report. About 43 percent of Youngstown homes didn’t have a hard-wired connection such as cable, DSL or fiber lines.

“Those are the kids that are falling behind [academically] because they don’t have internet when they go home,” said Lowellville Mayor James Iudiciani, who for the last two years has wanted to expand connectivity around the village. “It’s a shame we can’t figure that out for our communities.”

Iudiciani’s idea is to co-opt existing fiber internet lines running across rail lines that criss-cross the Lowellville-Campbell-Struthers-Youngstown area. But those plans have languished for lack of concerted focus, direction and potential funding avenues, he said.

“Who’s the go-to guy? What’s the go-to agency? … We gotta’ figure this out not only for our kids but for business attraction,” he said. “I’ve got European companies asking if we’ve got high-speed internet available and I have to say, ‘No.’”

Jessica Denson, communications director for Connected Nation, a nonprofit that received $905,000 from the state’s Ohio Third Frontier fund early last year to accurately chart gaps in broadband service areas across the state, said “the digital divide is growing between the haves and have-nots.”

“You can’t apply for a job or government services, get cheaper goods and services unless you have access,” she said. “It is no longer a privilege, it’s very much a necessity in this day and age.”

Though the Federal Communications Commission requires internet service providers to report where their service is available, that data often isn’t reported properly or is skewed by providers’ inflated reporting inside census blocks, advocates like Denson have said.

Eye on Ohio has begun documenting free Wi-Fi spots across the state, which appear on the map below. To contribute a location that offers free Wi-Fi to non-customers as well, add a line to this spreadsheet.

Connected Nation hosted several community forums last summer in largely rural areas across the state — the closest to the Mahoning Valley were in Kent and Marietta — to ask residents about their internet access.

Preliminary maps released by the group in November show the majority of households in Mahoning, Trumbull and Columbiana counties have access to broadband internet reaching speeds of at least 25 megabits per second, but almost all of that data is based on the FCC’s allegedly unreliable reporting.

Of those counties, Columbiana shows the most gaps, with about 84 percent of households reporting broadband availability, compared to nearly 99 percent in Mahoning.

Those maps are expected to be updated this month, according to the nonprofit’s website.

Connected Nation has rallied Mahoning Valley public and private entities to develop an action plan that was released in 2017 to improve broadband availability and digital literacy in the region, released in 2017.

The plan recommended regional partners launch a digital equity initiative and establish a community technology summit, to keep the issue in the public awareness and zero in on solutions, along with a public-private task force that includes public computer centers like libraries as well as broadband providers.

That plan centered around Mahoning and Trumbull counties, where more than 68,000 households were reportedly without a fixed broadband connection at the time.

More than a third of households with broadband availability only had one option for internet service providers.

Households that struggled the most to get connected had adults who: earned less than $35,000 a year; were aged 18 to 34; never finished high school or went to college; or had school-age children, according to the plan.

The report illustrates the "digital divide" on two fronts: consumers' socioeconomic barriers and lack of infrastructure to expand connectivity.

But digital education is the foundation that can lead to better, cheaper equipment and expanded connectivity infrastructure in the future, he said.

Connected Nation’s plan states more than half of the area’s K-12 curriculum was taught online. It also reports only 28 percent of employees in the community had advanced technology skills.

Oak Hill Collaborative’s chief focus is its Digital Advantage initiative. Years ago, the collaborative started putting small, programmable Raspberry Pi computer boards in children’s hands and helped fourth-graders build their own PCs that they could then take home.

“It shows people what is available to them on the internet with a little bit of education and experience. By seeing what is out there, they can appreciate how it can improve their lives, which increases the value of high-speed internet connections,” Kerrigan said.

Kerrigan said he doesn’t see any immediate potential solutions to the region’s broadband gaps because it requires more investment than the willing can provide, or more infrastructure than currently exists.

According to Connected Nation’s 2017 plan, nearly a third of area adults who don’t have internet access took advantage of public computers at a library. Public Library of Youngstown and Mahoning County visitors logged nearly 200,000 total sessions on public computers last year, according to Fifarek.

The library system has also seen “constant” demand for its 80 wireless hotspots, which are free to borrow for up to a week, she said. They circulated more than 2,000 times in 2019, and the library currently has a two-week waiting list for them.

Library branches have also stopped turning off their wireless access at night so people can use it after-hours from outside.

“We want people to be able to swim in this environment so they find it easier to adapt to technological change when it comes down the pike,” Fifarek said. “That level of resiliency is what’s going to make somebody successful in a technology-driven world.”

High cost of lumber delaying your home projects? Here’s when prices could come down
Apr 23, 2021 4:12 AM