Brush with history: Mural to be dedicated in Selma has Youngstown ties 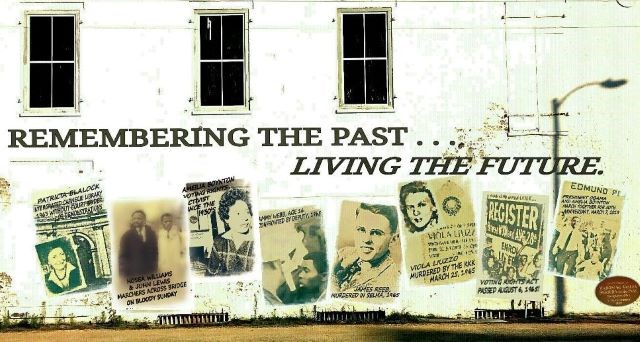 (Image courtesy of Mahoning Valley Sojourn to the Past)

YOUNGSTOWN — A mural funded by Mahoning Valley Sojourn to the Past that depicts civil rights events in Selma, Ala., in the 1960s will be dedicated at noon March 14 in the historic district, one block from the Edmond Pettus Bridge, the site of Bloody Sunday.

Youngstown Early College graduates and current Youngstown State University students Brittany Bailey, Lekeila Houser, Jasmine Macklin and Kira Walker will join Derrick McDowell and Penny Wells, executive director of Mahoning Valley Sojourn to the Past, at the dedication. Sojourn to the Past students travel to Selma each spring as part of their journey to civil rights sites in the South.

The mural, which consists of eight aluminum panels of impressionism art depicting people and events in the 1960s civil rights history of Selma, is on the side of the Selma Welcoming Center on Broad St.

Funds for the mural were raised through an anonymous donation, which paid for half of the mural, and donations from Youngstown citizens, who contributed much of the remaining costs at an event at the Tyler Historical Center in February where Joanne Bland, co-founder and former director of the National Civil Rights Museum in Selma, Ala., spoke and the documentary “After Selma” was shown.