Can eating cicadas make you high — or sick? What to know as they blanket parts of U.S. 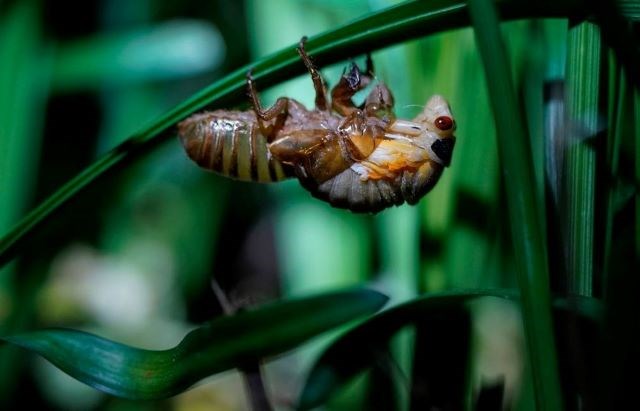 A cicada sheds its nymphal skin in Washington on May 22. Trillions of Brood X cicadas are emerging in the U.S. East after spending 17 years underground. (Carolyn Kaster | AP)

Eating cicadas isn’t for everyone, but for many, the red-eyed critters are a delicacy. And now that billions in Brood X are rising from the ground like zombies after 17 long years, so too are the rumors about the pros and cons of tossing them in your stir fry.

A star among the gossip: munching on cicadas can make you high.

Although there are more conventional ways to feel a buzz, this exotic option is not entirely ludicrous, experts say, and can happen “if you’re motivated enough,” according to Matt Kasson, an assistant professor of forest pathology at West Virginia University.

Kasson worked on a study published in 2019 that discovered a fungus called Massospora that causes cicadas to lose their limbs and mate uncontrollably — despite being newly genital-free. That fungus contains psychedelic chemicals similar to those in hallucinogenic mushrooms.

“Here is the thing,” Kasson said. “These psychoactive compounds were just two of less than 1,000 compounds found in these cicadas. Yes, they are notable but there are other compounds that might be harmful to humans. I wouldn’t take that risk.”

On top of the potential risk of consuming other dangerous substances, “you probably have to eat 100 infected cicadas to have a potential [“high”] effect on a 140-150 pound human being. If you’re bigger, then you’d have to eat even more,” Dr. David Shetlar, also known as “BugDoc Dave” from Ohio State University, told WCMH.

“The cicada is basically a gram in weight and the Massospora cicadina fungi produces micrograms of toxicant,” Shetlar added.

Eating a bucket worth of the insects could not only raise someone’s chances of getting high, as slim as those odds are, but it could also make some people sick, like those allergic to seafood.

Cicadas are land-dwelling cousins to shrimp and lobster, so anyone allergic to them should avoid eating the insects, experts say. The U.S. Food and Drug Administration tweeted a warning last week.

Others who should keep cicadas off their plates are pregnant or lactating people and young children, dietitian Beth Czerwony told the Cleveland Clinic, because some research has suggested the critters accumulate mercury from the soil in their bodies, which can harm babies’ and kids’ developing brains.

“Though you probably wouldn’t eat enough cicadas to ingest harmful levels of mercury, it’s best to avoid them altogether,” the experts said. People at risk for gout, a form of inflammatory arthritis, should also steer clear of eating cicadas as they may cause the condition to flare up.

It’s also important to consider how the land where your next cicada treat emerged has been managed.

“They’ve been in the ground for 17 years, so they’ve been able to absorb pesticides, lawn fertilizers and any other chemical you put on your lawn,” Czerwony said. “If your own lawn has been chemically treated, head someplace a little bit more wild and untouched to collect cicadas for eating.”

And ethically, it may not be a good idea to snack on them, anyway, according to John Cooley, a professor of ecology and evolutionary biology at the University of Connecticut.

“If somebody shows up with a giant truck and starts shoveling cicadas into the truck to turn into food — that is going to have an effect on the ecosystem,” Cooley told Inverse. That’s because periodical cicadas like the ones emerging now have better chances at survival when living in large groups.

Other than that, cicadas can be a tasty, good source of protein, University of Maryland entomologist Mike Raupp told the Associated Press. They’re also safe treats for curious pets — in moderation.

“They have a buttery texture, a delicious, nutty flavor, probably from the tannins, from the roots of the trees on which they fed,” Raupp told the outlet. “And they’re… really good with a Merlot.”

Marten Edwards, a biology professor at Muhlenberg College in Pennsylvania, told the Des Moines Register it’s best to cook cicadas as soon as they emerge from the ground, when they’re fresh. “At this point, the cicada will be pure white and soft before it hardens its shell, and there’s less chance it’s been affected by insecticide or other toxins,” he said.