At the urging of Gov. Mike DeWine, Canfield's newly formed COVID-19 task force is banding together to shift local perception of the virus.
Nov 7, 2020 4:34 AM By: Justin Dennis 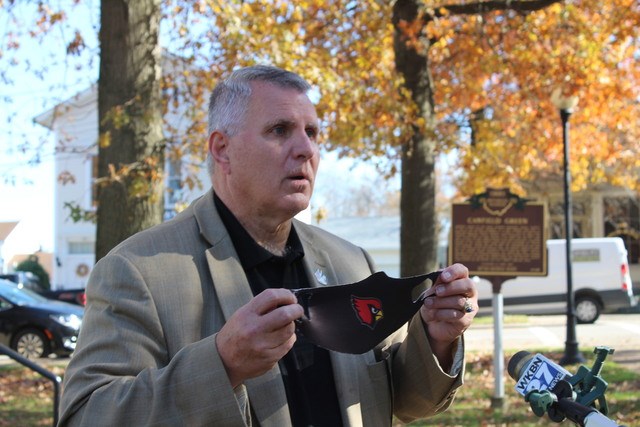 Canfield Mayor Richard Duffett reiterated the importance of masks following a formative meeting of the city's COVID-19 task force on Friday, Nov. 6, 2020. Duffett doffed his mask only while speaking to reporters or during Friday's meeting. (Justin Dennis | Mahoning Matters)

CANFIELD — Mayor Richard Duffett said he's reconsidering whether he should host this year's family Thanksgiving gathering of more than 30 amid the COVID-19 pandemic.

Others should too, he said Friday.

He also hasn't spoken out to others who aren't wearing masks in public. But he's going to start. Others should too — though "politely," he added.

"Right now, people feel tough if they don't wear a mask," Duffett told reporters Friday. "Or they politicize it and say, 'I'm a member of this or that party. I don't need to wear it. This is overblown.'

"We've already had people say, 'it's going to be gone by Election Day.' Well, that's already come and gone and it's not."

It seeks to de-politicize COVID-19 and shift public perception on its direness. The task force's strength lies in its local and personal approach, said Bill Kay, who served two terms as city mayor in the early 2000s and is one of the task force members.

Kay, who also served as high school principal for 26 years, said he plans to put his personal connections toward the effort.

"This [effort] on a local basis is personal," he said. "If you walk up and talk to somebody you know, the message gets home a little quicker and you can encourage them to pass that on.

"I think that's what the strength of this committee will be."

The city's 44406 ZIP code has marked 372 COVID-19 cases and 24 deaths to date, according to the Mahoning County Public Health dashboard — the 4th-highest total cases in the county to date. It also reported the 3rd-most cases among other county ZIP codes in August.

"We're in central Mahoning County right here," Duffett said. "We have thousands of cars come through here daily. If we get to be a hotspot, it'll spread from here. ... These are the types of places where it could get worse, because of all the commerce."

He said though the virus' impact has weakened as treatment expertise has dropped the COVID-19 death rate and shortened hospital stays, "that does not mean that we should lower our guard."

Cutrona said he feels the task force should first focus on bringing more transparency to the virus' impact and government response.

"People should definitely be mindful of wearing masks when they're going to be seeing any elderly or people who are immuno-compromised," he said. "Generally speaking, I think we're going to persevere through this, as the Valley has always persevered through difficult times."

Duffett previously said the task force would coordinate a new kind of public messaging campaign. As a council member, he said he wouldn't be opposed to codified penalties for those who aren't complying with the mask mandate, should the city's situation worsen.

"We're not shutting down anything. Our police departments aren't giving tickets for not wearing masks. But in two weeks, if the statistics for 44406, our ZIP code, start going up, then we might have to look at measures," Duffett said.

Duffett said Mahoning County Health Commissioner Ryan Tekac is supportive of the Canfield group, but did not attend Friday's meeting. Neither he nor other Mahoning County Public Health officials were available for comment Friday.

The task force is expected to reconvene later this month.