“It seems like life has become an endless struggle,” said Mahoning County Commissioner Anthony Traficanti. “It seems there is only doubt and fear, but there is hope around the corner.”
Feb 26, 2021 2:55 PM By: Justin Dennis 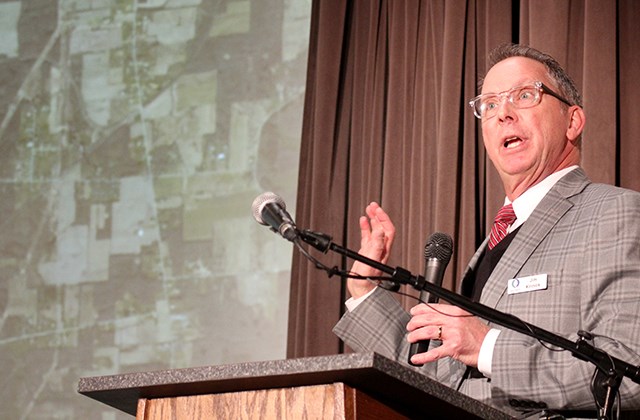 YOUNGSTOWN — Area government and business leaders today touted the triumphs of a year spent hamstrung and isolated by a global pandemic.

The Youngstown/Warren Regional Chamber hosted more than 100 attendees at its annual Good Morning Mahoning County! breakfast at Stambaugh Auditorium, which highlighted economic progress made during a lean, socially distant year and promised good news on the horizon.

It was the chamber’s first in-person event since the COVID-19 pandemic gripped the state, leading to a business-chilling lockdown.

“It seems like life has become an endless struggle,” said Mahoning County Commissioner Anthony Traficanti. “It seems there is only doubt and fear, but there is hope around the corner.”

Meijer employees working to bring online the department store’s new location along Market Street in Boardman said there’s been overwhelming interest in its grand opening, set for next quarter. The opening likely will be announced about six weeks in advance, said Boardman store Director Dessie Szklany.

“When are you gonna open? I have it asked about 17 times a day,” said Szklany, who’s spent about a decade in the chain’s Dayton and Cincinnati markets. “I’m excited about calling this place my home now.”

Though Eric Sklenar, the new Meijer store’s young pharmacy team leader, has lived his entire life in Canfield, he’s never had the opportunity to work in the area, he said today.

Chris Wilson of Boardman, who’s heading the store’s meat department, said he nurtured his butchery skills first as a hobby, then as a profession with local Sparkle markets, Sam’s Club and Catullo Prime Meats in Youngstown.

Matt Pagac, general manager of Stambaugh Auditorium, said at this time last year the venue was preparing for what looked to be one of its all-time best years.

“In a few weeks … we ended up laying off all our staff except for one and have had to work our way back from that,” he said.

The pandemic left live performances waiting in the wings, but it also spurred positive operational changes at the venue that otherwise “wouldn’t have happened without the adversity that we faced,” Pagac said.

Pagac said Gov. Mike DeWine’s Thursday announcement that the state’s sporting and entertainment venues can soon expect to reopen — albeit with just 25 percent indoor capacity — is “a step in the right direction” and sets the stage for a revival.

The new construction, expected to be completed this year, would match the building's historical architecture design.

Stock said bids for the work came in about $1 million under expectations.

Mahoning County Engineer Pat Ginnetti today outlined about $38 million in infrastructure improvements slated for the next four years, including: