Experts say it’s hard to determine the exact reason why head injuries lead to mental health issues.
May 5, 2021 5:11 AM By: Katie Camero | McClatchy 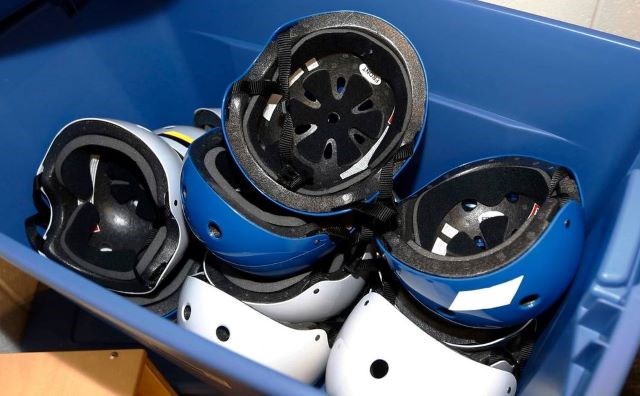 Safety helmets are seen in a container in a pre-K classroom at an elementary school in Oklahoma. A third of children develop a mental health problem after a concussion, such as depression and aggression, which could last for years in some kids, a study finds. (Sue Ogrocki | AP)

A review of 69 studies dating to 1980 found that a third of children develop a mental health problem, such as depression and aggression, after getting a concussion. And for some kids, the issues could persist for several years after injury.

The researchers at the Murdoch Children’s Research Institute in Australia suggest mental health evaluations should become part of routine pediatric concussion assessment and management. The review of past research was published April 29 in the British Journal of Sports Medicine.

“Despite the high incidence of concussion among children and adolescents, identifying those at risk of ongoing difficulties after concussion remains a prominent challenge for clinicians,” study co-author Alice Gornall, a researcher at MCRI and a Monash University PhD candidate, said in a statement. “On top of this, children take twice as long to recover from concussion than adults, with one in four children experiencing symptoms beyond one month post-injury.”

The team reviewed 69 studies published between 1980 and 2020 that involved nearly 90,000 children who have had concussions from nine countries, including the U.S., Canada, Australia and New Zealand.

About 37 percent of children experienced “significantly high levels” of “internalizing problems” such as anxiety, withdrawal, depression and post-traumatic stress following a concussion compared to children who did not suffer a head injury, according to the statement. Another 20 percent experienced “externalizing problems” such as aggression, hyperactivity and lack of focus.

And while kids’ mental health generally improved between three and six months after injury, a “minority experienced persisting symptoms for several years afterwards.”Falls, sport-related injuries and car accidents were the most common causes of concussion, in that order, the researchers noted.

In 2014, an estimated 812,000 kids age 17 or younger visited an emergency room for concussion or traumatic brain injury (TBI), according to the CDC.

For many, the struggle to perform, both mentally and physically, at levels typical before injury following a concussion is what negatively affects mental health.

“After my last concussion, I found it very hard to be motivated for school and everyday life,” Australia resident Emma, 17, told the researchers. She experienced two concussions a year apart. “Doing the simplest of tasks such as a walk was difficult for me. Not being able to complete these tasks got me quite disheartened, which impacted my mental health.”

It’s not easy to determine the cause of mental health disorders after head injuries, experts say. Like Emma, negative outcomes from the injury could affect mental health, while trauma on the brain itself could also be the cause.

“Symptoms such as increased irritability, intolerance, impatience and mood swings can be related to the impact of the injury on the brain, but it can also be a reaction to difficulties in managing stimulation and daily activities in the early days after the injury,” the Ontario Neurotrauma Foundation says.

Head injuries could also affect how a person experiences pain and their ability to sleep, “which may then cause further changes in the biology of the person’s brain,” the group said. “In addition, symptoms can sometimes cause other symptoms. For example, if a person is having persistent sleep difficulties and pain, it may cause them to feel depressed.”

A separate study of 1,155 adults who experienced a concussion came to similar conclusions: those with a history of mental illness, as well as Black people and those with lower levels of education, faced increased risks for developing PTSD and major depressive disorder after injury.

Gornall said the issue is a public health concern given a third of children experience a head injury before turning 13 years old.