State Rep. Michele Lepore-Hagan, D-58th, said for politicians, “dark money” — sometimes seen brought to bear in the 11th hour of an election cycle — is the “kind of stuff everyone was afraid of.”
Jul 25, 2020 5:07 AM By: Justin Dennis 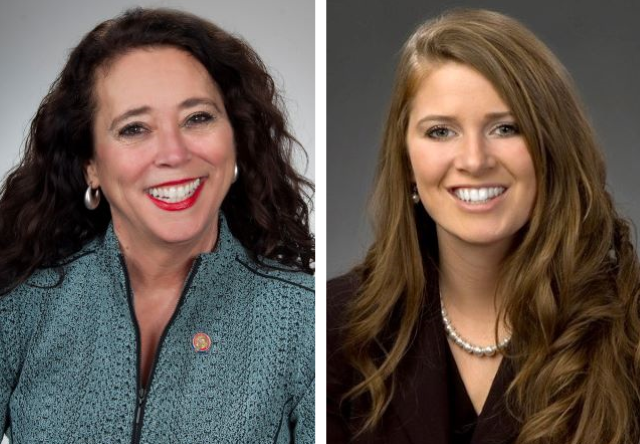 COLUMBUS — Clarifying a Thursday Mahoning Matters report on local politicians who received campaign money from those charged in a $61 million racketeering scheme, state Rep. Michele Lepore-Hagan said much of the contribution she received from the politically active FirstEnergy PAC, as reported in state campaign finance records, was actually intended for another Hagan — State Rep. Christina Hagan, who at the time represented the Ohio House’s 50th District.

Lepore-Hagan, of Youngstown, D-58th, told Mahoning Matters Friday one of the two $2,000 checks her campaign received from FirstEnergy in 2015 was actually intended for Christina Hagan. The check, however, was addressed to Lepore-Hagan's campaign — presumably a surname mixup — and she inadvertently cashed it.

She said the money was later returned after her husband Robert Hagan, who previously sat in the 58th district seat, noticed the error.

Lepore-Hagan said her campaign did receive $500 from FirstEnergy in 2019, but it was not connected to Ohio House Speaker Larry Householder's alleged scheme to use FirstEnergy “dark money” to stack the statehouse legislature to secure his speakership as well as HB 6, a more than $1 billion bailout for energy producer’s failing nuclear power plants.

"There was no conversation ever with me because they know I was heavily supporting renewables," Lepore-Hagan said Friday.

Like the election opponents of about 20 candidates believed to be backed by Householder in 2018, Christina Hagan, of Alliance, told the Center for Public Integrity in 2018 she was targeted by a “dark money” campaign that ultimately sabotaged her first bid for Congress.

Hagan told the center Conservative Leadership Alliance, led by a former FirstEnergy lobbyist, sponsored attack ads against her after she rebuffed their request for support to enact a bill to offer “zero-emission credits” that would have allowed FirstEnergy to collect $300 million a year from customers.

“I didn’t budge when they came into my office to lobby me,” Hagan told the center. “I became the target of the company and the members of our leadership team who wanted to get it done but couldn’t because I wasn’t going to be supportive. I’m sure they just wanted to make an example of me in my race for higher office that if you don’t play well, this is what will happen to you.”

Ohio Secretary of State campaign finance records show though Hagan received a total $15,000 from FirstEnergy regularly between 2011 and 2016, those contributions stopped.

In a statement to Mahoning Matters Friday, Hagan said, “As a legislator, I defied FirstEnergy lobbyists, and their dark money group attacked me because I opposed their taxpayer-funded bailout. I’ve never backed down from my principles, I won’t be bought and I won’t be bullied. In Congress, let’s work together to fight corruption at all levels of government.”

They do not indicate any other campaign donations from FirstEnergy or any other individual or entity named in the federal affidavit.

Hagan’s campaign could not immediately be reached for comment Friday.

Both Generation Now Inc., which prosecutors believe was the “dark money” entity through which FirstEnergy funds passed to politicians in Householder’s camp, and Conservative Leadership Alliance, which reportedly targeted Hagan, are both 501(c)(4) corporations, which don’t have to report their contributions for election oversight.

Michele Lepore-Hagan said for politicians, “dark money” — sometimes seen brought to bear in the 11th hour of an election cycle — is the “kind of stuff everyone was afraid of.”

“I think that really scared the Democrats because you can’t trace it. You don’t know where it’s coming from. There’s just a lot of money,” she said. “If your seat is targeted, they could drop a million in a minute against you.”

Former 59th House district Rep. Don Manning’s 2018 campaign got an almost $47,000 late-October boost from a state GOP committee which had received $230,000 from Householder just weeks prior, according to state records. That money went toward attack ads circulated days before the election against his opponent, Poland Township trustee Eric Ungaro, who ultimately lost by a razor-thin margin.

The bill closes “secret money loopholes” so 501(c)(4)s and limited liability companies must disclose any funding used for electioneering while also requiring corporations and LLCs to disclose their ownership. Domestic companies with at least 5 percent ownership by foreign individuals or 20 percent foreign groups would be banned from election spending.

Lepore-Hagan said the ongoing FBI investigation into Householder and his alleged co-conspirators is just one of many instances in which the public become “disillusioned with politicians.”

“It’s really depressing for all elected officials,” she said.