DeWine chose an S.C. health official to replace Acton — but she changed her mind

Ohio native Dr. Joan Duwve was expected to fill the position but backed out a mere six hours later for reasons unknown.
Sep 11, 2020 3:52 AM By: Justin Dennis 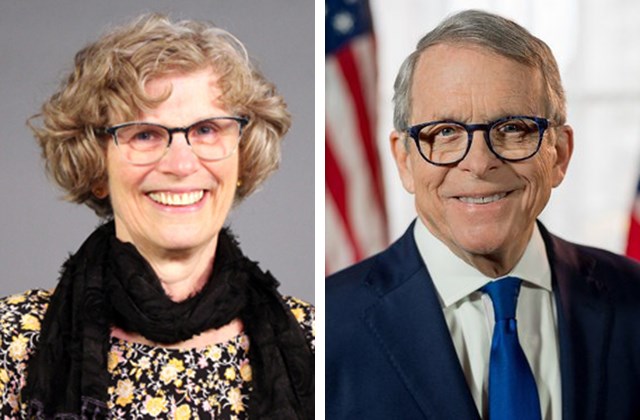 CEDARVILLE — Gov. Mike DeWine on Thursday seemed to have a replacement for Dr. Amy Acton lined up — but only for a few hours.

But Duwve on Thursday night withdrew her name for consideration, "citing personal reasons," according to an 8:30 p.m. announcement issued by the governor's office.

The governor's office will now continue its search for a full-time ODH director, according to the release.

Dan Tierney, the governor's spokesperson, said Thursday night Duwve decided to back out after the state's afternoon briefing, but couldn't offer any additional context.

Though the Twitter platform on Thursday afternoon showed Duwve's account "doesn't exist" — suggesting it was deleted by the user — internet archiving services show the page included a photo of Duwve and was active at least as recently as January 2019.

DeWine said Thursday he expected Duwve to begin the job around Oct. 1. Now, Lance Himes, who has served as the department's interim director since Acton resigned in mid-June, will continue to head the department, Tierney said.

During a Thursday press briefing in South Carolina, state officials seemed to be preparing for Duwve's departure in the coming weeks, The State reported. Duwve decided to return to Ohio in order to be closer to her family, officials said.

"We're very happy for her. We will miss her," said Marshall Taylor, director of the state's Department of Health and Environmental Control.

She, like Ohio officials, has participated in the same weekly conference calls with federal officials on the COVID-19 pandemic response — albeit from South Carolina, DeWine said.

Duwve has more than 20 years of experience in public health, according to South Carolina’s Department of Health and Environmental Control, which Duwve joined as public health director in April.

At the time, the number of coronavirus cases in the state was first beginning to climb, according to The State. She soon joined S.C. Gov. Henry McMaster during public coronavirus briefings and testified in legislative hearings.

She also served as an associate dean at Indiana University Richard M. Fairbanks School of Public Health in Indianapolis.

Duwve had a private family practice in Indiana for the prior 11 years.

Duwve is a graduate of North Olmsted High School and The Ohio State University. She earned her Master's degree in public health from the University of Michigan and her medical doctorate from Johns Hopkins University.

“I am thrilled to return to Ohio, where I grew up,” Duwve said in a press release, prior to her change of heart. “Through forging strong partnerships across the state, I firmly believe that together, we can build healthier communities that in turn create greater opportunities for all Ohioans to thrive.”

South Carolina has reported 124,397 total coronavirus cases and 2,823 deaths to date, according to the DHEC COVID-19 dashboard, while Ohio on Thursday reported 127,106 total cases and 4,064 deaths.

South Carolina, however, has less than half the population of Ohio, according to the U.S. Census Bureau.

Unlike Ohio, South Carolina has not issued a statewide mask mandate. In June, McMaster said such an order would be “impossible” to enforce, The State reported. On Sept. 1, DHEC estimated 48 percent of S.C. residents use masks, based on survey data. That’s up from 30 percent in late June.

Later that month, South Carolina reported a record 1,741 confirmed coronavirus cases in one day, according to The State.

In an article published last month, The State asked numerous South Carolina state health officials, including Duwve, how they protect their families from COVID-19:

If you had kids, would you send them to in-person classes at school this year?
Duwve: I do have kids — they are older and in a university setting. Both of their schools are offering classes remotely. So much about the decision to attend in-person really depends on the family situation and how much disease is circulating in the community. A family that has elderly grandparents living with them may not feel they can risk sending a child to school where they could get infected unknowingly. It’s also important to consider the risk to teachers and the impact on a child should they lose a teacher to COVID-19. If we all rally and wear our masks, I am hopeful that disease levels will fall to a level that everyone can get back to school and work safely.

Here are other recent coronavirus-related developments in the state or region:

• According to the latest figures Thursday from the Ohio Department of Health, the state is reporting 127,106 confirmed cases of the coronavirus. There have been 2,923 confirmed or suspected cases in Mahoning County; 1,796 in Trumbull County; and 1,889 in Columbiana County.

• Statewide, there have been  4,064 confirmed deaths, including 274 in Mahoning County; 126 in Trumbull; and 71 in Columbiana. Mahoning County's 274 reported COVID-19 deaths on Thursday was fifth-highest among Ohio's 88 counties; Cuyahoga County had the most with 613.

• This month, each of the Mahoning Valley’s three local health departments released updated ZIP code-level data for reported COVID-19 cases. You can see how many COVID-19 cases have been reported in your community on our map.

• Ohio Secretary of State Frank LaRose wants Ohioans, including candidates, to be patient on election night. With the potential of hundreds of thousands of absentee ballots cast in Ohio for the general election, it could be weeks rather than hours before winners will be clear in local, statewide and national races.

• According to the Pennsylvania Department of Health on Wednesday, there are 141,877 COVID-19 cases in the state which have led to 7,820 deaths. The state said the recovery rate is 82 percent. There have been 617 confirmed or suspected cases in Mercer County and 13 deaths; 480 cases in Lawrence County and 21 deaths.

• Lawmakers from Ohio, Pennsylvania, Michigan, Minnesota, Iowa and Wisconsin on Tuesday sent a letter encouraging Big Ten Commissioner Kevin Warren to reverse its decision for the fall season. They said they were encouraged by parents, students, and coaches to advocate for competing in the fall and wanted “to defend the students’ long-term academic and career interests.”

• About 884,000 U.S. workers filed new claims for unemployment benefits last week, the second consecutive week that new claims fell below the million mark and the third time in about a month. Continuing claims, however, which count those who filed for benefits at least two weeks in a row, ticked up to 13.4 million.

• In Ohio, 17,983 workers filed new unemployment claims last week, according to the Ohio Department of Job and Family Services.