DeWine gets feisty as more Ohioans head back to work

While the governor confronts "obnoxious" protestors, he admits that enforcement of the back-to-work rules is left to local health departments.
May 5, 2020 3:52 AM By: Jess Hardin 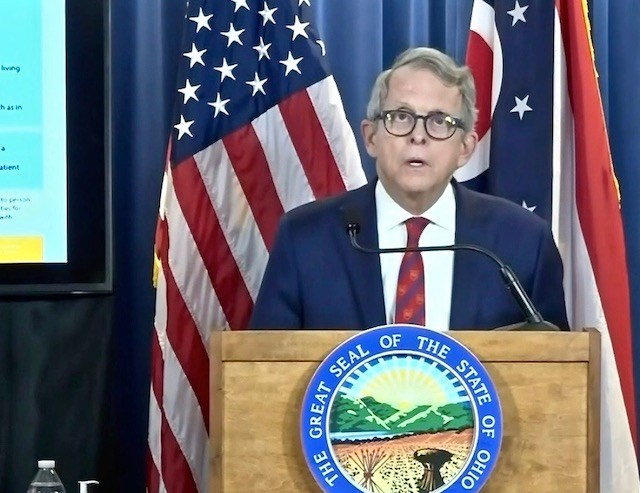 Gov. Mike DeWine during the Monday, May 4, 2020 state coronavirus update.

COLUMBUS — Gov. Mike DeWine opened Monday's coronavirus briefing with a message for his most vocal critics: "Come after me."

Over the weekend, pictures and videos made the rounds on social media showing protesters accosting reporters and camping out at Ohio Health Director Amy Acton's Columbus home.

As DeWine struck a feisty pose, Monday was also the first day back at work for thousands of Ohioans.

Per the state's Responsible Restart Ohio plan, on Monday, general office workers and manufacturing, distribution and construction workers were permitted to return to work. On May 12, consumer, retail and service businesses may reopen.

All businesses are required to provide each employee with a face covering such as a mask; screen employees for symptoms; maintain good hygiene measures; clean and sanitize workspaces at the start and close of business daily; and limit customer capacity to no more than half of what's allowed under fire safety codes.

But what if employers returning to work don't follow that new safety protocol?

"They will come out and inspect and enforce the rules," said Husted. Employees that lodge complaints can do so anonymously.

ODH spokesperson Melanie Amato added that local departments will decide if or how to penalize the business.

Mahoning County Commissioner David Ditzler on Monday told Mahoning Matters he doesn't feel there will be many opportunities for Mahoning County Public Health to enforce the state's directives, on top of its other daily sanitation enforcement duties.

"I think people are going to have to police themselves initially. ... Everyone in Mahoning County — we're in this together. Unless we now work together to do this type of thing, we're going to be back at square one in the fall," when some medical experts forecast a resurgence of the virus running alongside the annual flu season, he said.

"We're probably going to have [noncompliance] cases we're going to have to address. If we're lucky, those'll be few and far between," he said. "I'm sure it's going to get more and more difficult and more trying on them as a department."

Additional county funding has been diverted, however, to the Mahoning County Emergency Management Agency, which has been tasked for sourcing more personal protective equipment for first responders.

On Friday, a protester — who was not wearing a mask or practicing social distance — accosted Adrienne Robbins, a Columbus television reporter who was covering the demonstration outside the Ohio Statehouse.

"Reporters and photographers are doing nothing more than following that First Amendment and informing the public," said DeWine. "To treat them with disrespect and to not observe social distancing with them, to be just obnoxious, I just find that very, very sad."

On Saturday, photos circulated on Twitter of demonstrators with assault weapons outside Acton's home in Bexley, a suburb of Columbus. Protests against Acton have included anti-Semitic rhetoric and signage; Acton is Jewish.

Ohio State Rep Nino Vitale, R-85, took to Facebook Friday to call Acton a "globalist," which has long been an anti-Semitic slur.

A little more than 1 percent of the Ohio population has been tested for the coronavirus so far, Acton said Monday. Within the next few weeks, Ohio will have the capacity to test 22,000 people per day.

On Monday, Dr. Acton explained how the ramped-up testing program will roll out. The state has identified three prioritized groups for coronavirus testing.

The third group includes Ohioans who are having a medical procedure that was initially delayed during the pandemic.

"That testing, we really don't have enough for yet," said Acton. Coronavirus testing in Ohio still requires a provider's order.

Lt. Gov. Jon Husted said Monday that the Ohio Bureau of Motor Vehicles office will open later this month, but he did not provide a specific date.

The "get in online" feature will roll out first, said Husted. The feature allows Ohioans to sign up online for a spot in line at a specific time.

The state's coronavirus response bill extended state-issued licenses — both driver's licenses and plates — until either 90 days after the state's current declaration of emergency ends or until Dec. 1.

Despite this extra leeway, some Ohioans claim their expired license has resulted in job rejections since employers do not accept expired licenses, reported ABC9 in Cincinnati.

• According to the latest figures Monday from the Ohio Department of Health, the state is reporting 19,609 confirmed cases of the coronavirus. There have been 961 confirmed cases in Mahoning County; 347 in Trumbull County; and 287 in Columbiana County.

• Statewide, there have been 75 confirmed deaths, including 84 in Mahoning County; 31 in Trumbull; and 23 in Columbiana. Mahoning County's 84 reported COVID-19 deaths on Monday was tied for third with Franklin County among Ohio's 88 counties; Cuyahoga County reported 121 deaths; Lucas County had 120.

• As of Monday, Ohio manufacturing, distribution and construction businesses as well as general office environments may re-open while complying with several safety mandates. On May 12, restrictions on retail and consumer services are also set to be relaxed.

• According to the Pennsylvania Department of Health on Monday, there are 50,092 COVID-19 cases in the state which have led to 2,458 deaths. There are 65 cases in Lawrence County with 6 deaths; 65 cases in Mercer County with 1 death.

• Pennsylvania will lift some pandemic restrictions in two dozen counties including Lawrence and Mercer beginning May 8, Gov. Tom Wolf said. Most businesses in these counties – including daycares – may reopen as long as social distancing guidelines and universal masking are practiced.

• Proceeds from the Youngstown Clothing Co.’s new "City With Heart" T-shirt will go to Second Harvest Food Bank of Mahoning Valley. Every $20 shirt sold will provide a week's worth of food for a family of three.