As the state reports record-breaking numbers of new cases, hospitalizations and deaths, the governor is outlining a vaccine distribution plan. The first shipment from Pfizer could come as early as Dec. 15.
Dec 5, 2020 6:00 AM By: Jess Hardin 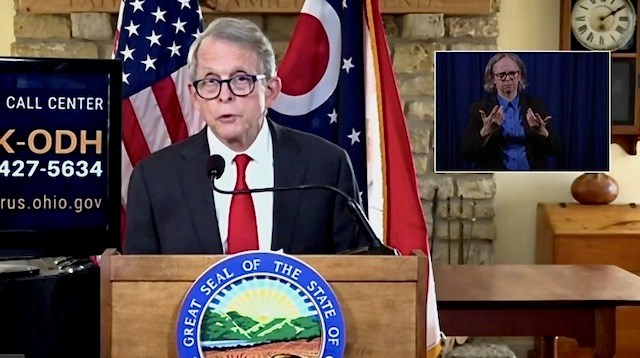 COLUMBUS — For Ohioans holding out hope that Gov. Mike DeWine has more in his pandemic-fighting arsenal than vague curfews and mask-wearing pleadings, he hinted Friday that more strict guidance may be on the way.

During a rare Friday news conference ostensibly set up to outline the state's strategy and schedule for distributing the highly anticipated COVID-19 vaccine, DeWine also had the grim task of once again outlining the state's record-breaking numbers of new cases, hospitalizations and deaths.

In response to a reporter's question, he seemed to acknowledge that Ohio may return to additional restrictions to stem the uncontrollable spread.

"We are going to have to do more," he said, without specifically referencing past efforts, like stay-at-home orders utilized last spring.

For the first time since the state began issuing coronavirus test positivity advisories for travelers to and from different states, Ohio surpassed its own warning threshold of 15 percent.

Dr. Bruce Vanderhoff, Ohio Department of Health's chief medical officer, said that should be a "wake up call" to Ohioans.

"We think these things help, but they clearly aren't helping enough," he said.

Meanwhile, the state is plotting a path toward its goal of herd immunity. The roll-out of the COVID-19 vaccine could start as early as Dec. 15, DeWine said Friday.

Ohioans in group "1A" will receive the vaccine first. They include:

The first shipment from Pfizer could come as early as Dec. 15. DeWine anticipates about 9,750 vaccines will go to hospitals, and 88,725 vaccines will be distributed to Walgreens and CVS to go to congregate care settings, like nursing homes.

Ohio is also expecting two additional shipments — of about 123,000 and 148,000 vaccines — from Pfizer. The second and third shipment from Pfizer has not been confirmed.

The state could also start to receive vaccines from Moderna. The first shipment, of 201,900 vaccines, will go to 98 hospitals and 108 health departments. A second shipment from Moderna of 89,000 is expected to go out a few days later.

When asked when the general population will have access to the vaccine, DeWine said, "I don't think anybody knows that." But, "The goal is to get to them and get to them as fast as we can."