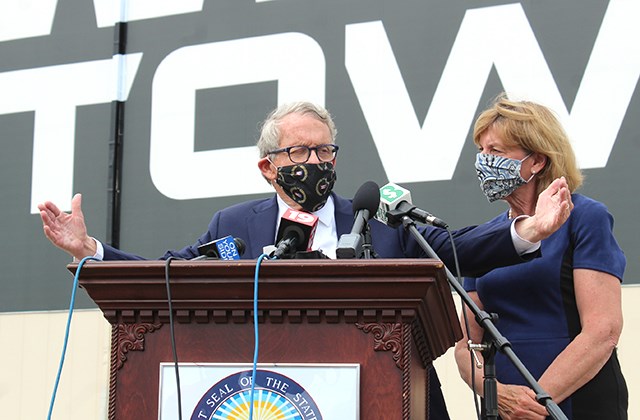 LORDSTOWN — State leaders said they got a charge out of the Voltage Valley brand.

Speaking to reporters near the Hallock Young Road plant's solar field, DeWine and Husted reflected on General Motors' December 2018 announcement that it would idle the 6.2 million square-foot facility, once home to the Chevrolet Cruze.

It happened just before they took office.

"Ohio's always been an auto state and an auto part state," DeWine said. "This is the future. I think this truck really has a great competitive advantage over its competitors.

"This is absolutely amazing how fast this has happened. I know for people in the Mahoning Valley, it seems like it's not happened fast enough. [The fact that] it's come from zero to 120 in a very short period of time, I find, frankly, amazing," he continued. "It's exciting. The Mahoning Valley, I believe, has a great, great future."

The governors took questions on electric vehicles as an emerging industry and the availability of charging stations in the state, as well as its jobs impact.

"We want to be a leader in this," Husted said.

DeWine initially intended to visit the plant Thursday, when Lordstown Motors plans to reveal the Endurance for the first time. His visit was shifted to Thursday after Vice President Mike Pence announced he would appear and deliver remarks at the Thursday event.

That event will be livestreamed on Lordstown Motors' YouTube channel, as well as on MahoningMatters.com, beginning at noon Thursday.