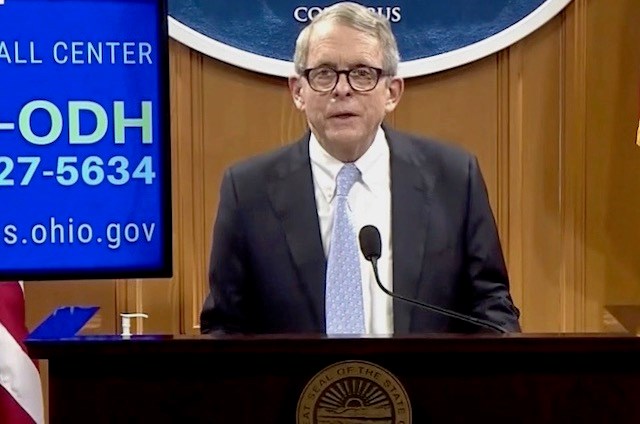 Gov. Mike DeWine has announced that the Browns and Bengals can have two home games each with 6,000 fans.

COLUMBUS — Ohio Gov. Mike DeWine announced Saturday that he has granted the Cleveland Browns and the Cincinnati Bengals  a reprieve from the state's sports order so that the teams can host up to 6,000 spectators at four games.

Because of the coronavirus pandemic, the Ohio sports order signed by DeWine on Aug. 19 limits spectators in stadiums to 1,500.

The allowance DeWine announced on Saturday mandates no more than 1,500 spectators in each side of the Browns' First Energy Stadium and the Bengals' Paul Brown Stadium, according to a news release. Presumably, that's four total sides.

Fans must use the designated entrance for their tickets and all fans must wear a mask.

"This year will certainly be different, but both the Browns and the Bengals have worked exceedingly hard and have made extensive preparations to welcome a limited number of fans to their stadiums safely," said DeWine in a news release. "These very thorough plans and safety precautions warrant a two-game trial to try and accommodate fans, at reduced capacities with social distancing and masks."

The Browns and Bengals each have eight home games. The teams will decide which ticketholders will be allowed to use them for each game.

The Browns' first home game is Sept. 13 at 1 p.m. against the Balitmore Ravens.