Not meeting the deadline is "simply not acceptable," the governor said during a special address last week. But he appeared to back off Thursday, even shifting the spotlight to Canfield’s efforts to combat the COVID-19 pandemic.
Feb 19, 2021 9:47 AM By: Jess Hardin 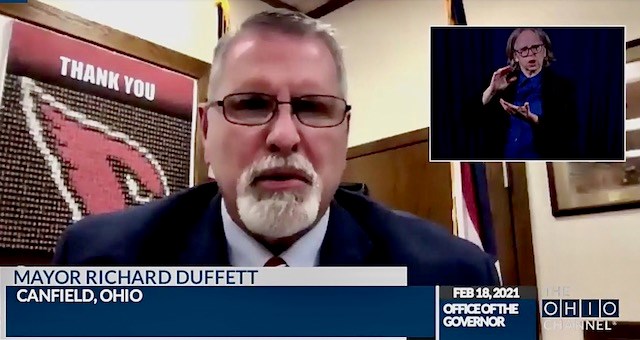 COLUMBUS — The state spotlight was on Canfield’s efforts to combat the COVID-19 pandemic during Gov. Mike DeWine’s coronavirus briefing Thursday.

At the task force's first meeting Nov. 6, Duffett said he hadn't spoken out to people who weren't wearing masks in public. But he started doing so and encouraged others to do the same.

"We've already had people say, 'it's going to be gone by Election Day,'" Duffett said in November. "Well, that's already come and gone and it's not."

For example, he relies on parents to check their kids for symptoms before heading to school, and the district has used technology to make meetings safer.

"It's been hand-to-hand combat. It's been day-to-day," said Knoll. "But every day we're in-person teaching is a blessing."

"This has been a really great, great effort so thank you for your hard work," DeWine said.

Youngstown City School District is one of the state's few district that has not returned to some form of in-person schools.

To vaccinate school staff, the district pledged to return to the classroom by March 1, but it doesn't appear it will make the deadline, despite DeWine's unwavering stance on getting back to school by the beginning of next month.

Not meeting the deadline is "simply not acceptable," DeWine said during a special address the evening of Feb. 12. But he appeared to soften by Thursday, calling the school vaccination program successful.

He noted the percent of students fully remote has fallen from about 40 percent in December to 12 percent now.

"The fact that some may miss [the March 1 school opening] is not good, but I think we need to keep our eye on the ball," he said. "We should not fixate on the 5 percent or so that is not full."

CEO Justin Jennings during his first CEO update of the year last week said the district is focusing on administering vaccinations and continuing to “keep people healthy.”

One of the challenges to returning to the classroom is transportation. Jennings said he would use incoming federal pandemic relief funding for more transportation, but the ordering process could take months.

• The number of state COVID-19 deaths has continued to spike after last week’s discovery of as many as 4,000 unreported COVID-19 deaths in Ohio. The Ohio Department of Health has reconciled an internal death certificate database with a federal database and added those deaths to the state’s tally.

• Youngstown Mayor Jamael Tito Brown testified Thursday during a Senate Banking, Housing and Urban Affairs Committee hearing on COVID-19 recovery efforts. U.S. Sen. Sherrod Brown of Cleveland, D-Ohio, chairman of the committee, led the hearing that featured the mayor and other witnesses who discussed their priorities for COVID-19 recovery, including the need for immediate, equitable relief.

• Health care providers administered more than 100,000 doses of Moderna’s COVID-19 vaccine to first-time recipients despite earmarking those shots for individuals receiving a second dose, according to the Pennsylvania Department of Health. As a result, about 100,000 people will see their immunization appointments rescheduled in coming weeks, including between 30,000 and 60,000 set to receive the second dose, officials said.