DeWine: Some schools took COVID-19 vaccinations but may break promise to reopen March 1

“Your commitment is not just to me. Your commitment is to the students and the parents in that district,” DeWine said during a special address Friday evening, which he said was intended to appeal to district administrators and board members.
Feb 12, 2021 8:11 PM By: Justin Dennis 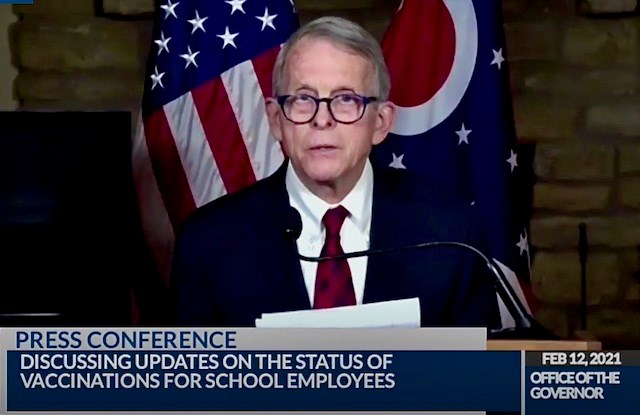 CEDARVILLE — Though nearly all Ohio school districts have pledged to return to in-person learning by March 1 — thereby receiving priority in the state’s coronavirus vaccine distribution plan — some districts appear to be reneging on that commitment, Gov. Mike DeWine said Friday.

The governor called the shift “simply not acceptable” and urged those districts — he specifically named Cleveland, Akron and Walnut Hills school districts — to keep their promises.

“Your commitment is not just to me. Your commitment is to the students and the parents in that district,” DeWine said during a special address Friday evening, which he said was intended to appeal to district administrators and board members.

As of Friday, only about 5 percent of Ohio students are still learning remotely, down from about 45 percent in December, according to the governor’s office.

“We don’t know when it’s going to be but we’re going to focus on just getting everybody vaccinated and continue to keep people healthy,” Youngstown Schools CEO Justin Jennings said during his first monthly CEO update of 2021 Wednesday night.

Like other Ohio school districts, Youngstown has struggled to make buses available for a return to in-person schooling.

Jennings has said he intends to use an incoming round of federal pandemic relief funding toward transportation — as well as social distancing tools, rapid testing kits and other safety measures — but the district doesn’t know how much funding to expect, or when it will be available. The funding was expected to arrive last week, Jennings said.

“It is simply not possible to follow the CDC’s rules without the resources to do so,” OEA President Scott DiMauro is quoted in the release. “More than 60 percent of Ohio’s teachers are already teaching in person — some are doing so at risk to themselves. But they shouldn’t have to. Our members want more than anything to be in their classrooms with their students when it is safe, and we are all counting on Congress to deliver what we know is needed to make schools safe now.”

“We just have a small amount of vaccine. It’s very precious. We’re trying to apply it,” DeWine said Friday, suggesting the state would redirect shots from noncompliant districts — but finish the two-shot vaccinations that have already begun.

This week, Mahoning County Public Health and Columbiana County Health District announced they would either temporarily suspend or restrict vaccine pre-registrations to the elderly due to overwhelming demand for the vaccine.

There are more than 300,000 adult school teachers and staff eligible for the vaccine in the state’s current vaccination phase.

Of the about 200,000 coronavirus vaccine doses expected to be distributed each week in the state, about 60,000 are going to schools during the four-week school vaccination program, the governor said Friday.

“That still leaves another 140,000, roughly, vaccines and that vast majority of that is going to people based on their age — 65 and older,” DeWine said.”We’re doing two things at once. We can do it.

“When [health departments] run out, it means they simply got it into people’s arms and got the job done. For most, they’ll get replenished. … The cycle continues to go forward.”