DeWine takes on disproportionate care: 'These truly are life and death issues'

The governor announced a preliminary report on how COVID-19 is impacting communities of color, including expansions in access to testing and data on the availability of resources in those communities.
May 22, 2020 4:11 AM By: Justin Dennis 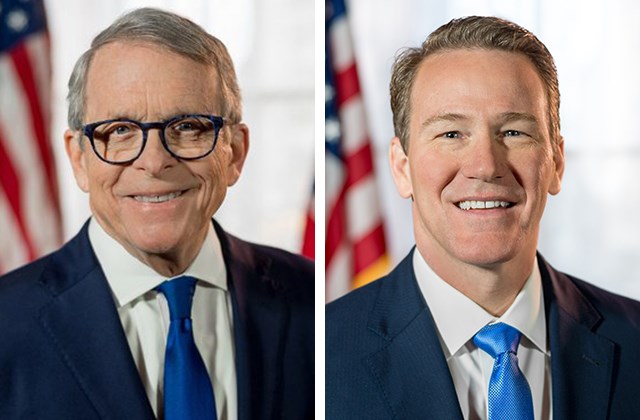 COLUMBUS — Ohio Gov. Mike DeWine announced a preliminary report on how COVID-19 is disproportionately affecting communities of color, expected to be released Thursday, would cover expansions in access to testing and disease education and notifications, and data on the availability of resources in those communities.

These are not new trends in public health, he added, citing unrelated health statistics like infant and mother mortality, which have for years been far worse for African Americans in Ohio.

DeWine said the state will begin publishing racial and ethnic demographic data which can be broken down by county on the state's COVID-19 online dashboard, as well as maps showing where resources must be targeted to assist the communities most vulnerable to COVID-19.

DeWine also announced a partnership with the Ohio Association of Community Health Centers to increase availability of COVID-19 testing for minority groups, as well as on a program to provide small health kits — including face coverings and hand sanitizer — to those in need.

OACHC federally qualified health centers across the state, including several in the Mahoning Valley, mostly in economically depressed areas, and cater to patients who are living below the poverty level.

Locally, the faith-based group Alliance for Congregational Transformation Influencing Our Neighborhoods has coordinated a live, online panel discussion on the racial disparities of the pandemic, which is set for next week.

"We're dealing with a culture and community by which although we're resilient — and we've displayed that and we've shown that — the reality is that there's situations and circumstance[s] that have not been mitigated throughout the years,"  said Rev. Lewis Macklin of Holy Trinity Missionary Baptist Church in Youngstown.

The forum is set for 6 p.m. to 7:30 p.m. June 4 and will be hosted on the Zoom virtual meeting app. Pre-registration is required. To pre-register, click here.

DeWine said Thursday's release from the state's minority health strike force would be a "preliminary" report and the group, which was formed in April, is expected in mid-June to make formal recommendations toward sweeping changes to how minority public health.

When asked by an Ohio Latino TV reporter whether the formulating state plan is in danger of being bogged down by bureaucracy and ultimately be able to achieve long-term goals, DeWine said he expects the plan to remain in place throughout his tenure.

"We have to work and we will work with the local communities and non-governmental agencies and nonprofits and people who are familiar with whatever the community is," the governor said. "Whatever population we're talking about, we have to have [representation from] people in that community."

In other announcements, Ohio Lt. Gov. Jon Husted said catering and banquet centers will be allowed to re-open June 1, under similar guidelines in place for restaurants, and with gathering sizes limited to 300 people.

Additionally, athletic conditioning for school sports like football, basketball and lacrosse will also be allowed to resume May 26, "so long as safety protocols are followed," he said. That includes weight, agility and skills training, he said. More details on safety protocols are available at coronavirus.ohio.gov.

Husted clarified an amended state order does not allow scrimmages or tournaments to resume for contact sports — only for non-contact sports such as golf, racquetball, lacrosse and softball.

"While the plans for the school year in the fall are still being discussed, we do know skill training and conditioning for student-athletes is important to start now," he said. "For a lot of the student-athletes out there, I know you are anxious for more certainty about your future. ... For now, there's a reason for optimism, so let the training begin."

Also, recreational facilities like bowling alleys, mini-golf courses and batting cages have also been cleared to re-open May 26, alongside gyms and fitness centers, while adhering to the same safety protocols laid out for those places on coronavirus.ohio.gov.

• According to the latest figures Thursday from the Ohio Department of Health, the state is reporting 28,174 confirmed cases of the coronavirus. There have been 1,277 confirmed cases in Mahoning County; 499 in Trumbull County; and 467 in Columbiana County.

• Statewide, there have been 1,653 confirmed deaths, including 162 in Mahoning County; 40 in Trumbull; and 50 in Columbiana. Mahoning County's 162 reported COVID-19 deaths on Thursday was fourth among Ohio's 88 counties; Lucas County had the most with 219.

• The City of Youngstown on Thursday reported 268 total cases, including 54 hospitalizations and 24 deaths.

• The federal Bureau of Prisons on Thursday reported 136 active cases of COVID-19 at Federal Correctional Institution Elkton, including 128 cases among inmates and eight among staff, as well as nine inmate deaths, which is the second-highest among all federal prisons with reported cases, behind the Federal Medical Center in Fort Worth, Tx. The prison's most recent death was reported May 8. The bureau also reported 83 inmates and 44 employees have recovered from the disease.

• Ohioans were permitted to dine inside some of their favorite local restaurants starting Thursday. However, a spot-check by Mahoning Matters revealed many are delaying the return to indoor seating.

• Though rapid blood tests for coronavirus antibodies are becoming more ubiquitous, some medical professionals and federal overseers warn of their potential inaccuracies. Here's how the statistics pan out for rapid tests that can be found locally.

• The Boardman Kiwanis Memorial Day Committee announced Wednesday that the 116th annual Boardman Memorial Day Ceremony will take place at 10 a.m. Monday via conference call. The dial-in number is 701-802-5232. The access code is 7516354.

• A new drive-up COVID-19 testing clinic at the Boardman Walmart starts Friday. The clinic, coordinated by Quest Diagnostics, will be available from 7 a.m. to 9 a.m. on Mondays, Wednesdays and Fridays, weather permitting. Appointments are required.

• Ohio's state Senate denied a bid to give lawmakers oversight of pandemic orders issued by the Ohio Department of Health. An amended version of Senate Bill 1, which the House passed by a 58-37 margin earlier this month, targeted orders issued by ODH Director Dr. Amy Acton.

• According to data released Thursday by the U.S. Department of Labor, an additional 2.44 million workers filed for benefits in the week ending May 16. The number of jobless claims filed in the past nine weeks now tops 38 million.

• In Ohio, more than 46,000 initial unemployment claims were filed last week. In the past nine weeks, 1.2 million Ohioans have filed initial jobless claims.

• In Pennsylvania, more than 64,000 filed for unemployment last week, bringing the state’s total during the nine weeks of the coronavirus crisis to 1.8 million.

• According to the Pennsylvania Department of Health on Thursday, there are 65,392 COVID-19 cases in the state which have led to 4,869 deaths. There are 73 cases in Lawrence County with 8 deaths; 97 cases in Mercer County with 4 deaths.