DeWine: The COVID-19 fight must be fought locally

"We don't have the ability to have 'mask police' everywhere. We rely on the goodwill of the people of the state of Ohio," Gov. Mike DeWine said Thursday.
Oct 30, 2020 3:52 AM By: Justin Dennis 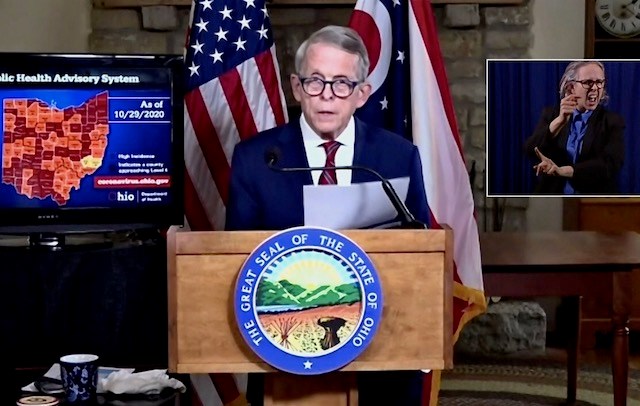 Mahoning Valley government and health authorities have communicated "frequently" since the beginning to fight the novel coronavirus, said Mahoning County Public Health's Dr. James Kravec. But like DeWine, he said the real battleground is the public's perception of the pandemic.

"Some people don't 'buy' what we're telling them. It's hard to get through to people that don't believe the message."

The Ohio Public Health Advisory System map was updated to show 43 of Ohio's 88 counties at level 3 "red" alert status. Of those 88 counties, 83 are considered to have a high incidence of virus transmission by federal guidelines, including Mahoning County and, now, Trumbull too.

"The virus is raging throughout the state of Ohio. There's no place to hide," DeWine said during his Thursday address. He also again urged Ohioans to rethink holiday plans.

Dr. Richard Lofgren, CEO of University of Cincinnati Health, said his southern Ohio metro area in late September had about 90 people hospitalized for COVID-19. As of Thursday, about 260 were hospitalized.

Though virus deaths have not spiked alongside hospitalizations — as medical professionals have gotten better at treating the virus, he said — he's concerned about hospital capacity should the surge sustain.

"If it were to double or triple, it will squeeze out non-COVID care," Lofgren said.

"I think we have capacity now. We actively monitor this every day and, really, the numbers on the Mahoning County dashboard are really the best indicators," Kravec said. "As a level-1 trauma center, we are prepared for increased numbers.

"But we need to make sure we reduce the hospitalizations so we continue to keep room for the people who are sick."

ICU bed occupancy in Mahoning County has hovered between about 65 percent and 75 percent for weeks, according to ODH. That includes non-COVID patients. But the portion of COVID-19 patients in the ICU rose steadily from 5.5 percent on Oct. 14 to 12.6 percent on Monday.

DeWine on Thursday said the state is relying on Ohioans' sense of personal responsibility to slow the spread of coronavirus, rather than "mask police."

"Ohioans have been able to dramatically increase mask-wearing. We saw this back in July when we had a statewide mask order," resulting in 85 percent to 90 percent compliance in some areas, he said.

"When we saw that, we saw cases go down. We can do this again," DeWine said. "We don't have the ability to have 'mask police' everywhere. We rely on the goodwill of the people of the state of Ohio.

"Once they see what [masks have] been doing in their community, we're going to see mask compliance go up."

• The Youngstown Phantoms' first opponent in their 12th USHL season has been sidelined by coronavirus. The Phantoms' Nov. 6 season opener was scheduled against the Chicago Steel, but that team has been benched following a coronavirus outbreak.

• The Dana Symphony Orchestra, led by Kivie Cahn-Lipman, will present a Halloween concert, premiering at 7 p.m. Saturday on the Cliffe College of Creative Arts' YouTube channel. Recorded at Stambaugh Auditorium, students will be dressed in Halloween costumes to carry out the holiday theme.

•  Bidding is open on the United Way of Youngstown and the Mahoning Valley’s PNC Champions Holiday Auction. The online auction is an alternative to United Way’s annual in-person Champions Among Us event, which was canceled due to COVID-19 restrictions. You can bid on United Way’s BidPal virtual bidding platform.

• The classic ballet "The Nutcracker," normally the Ballet Western Reserve's holiday offering, will be presented in a new way as "A Nutcracker Drive-In" at the Eastwood Field parking area on the big screen Dec. 18-19 at 7:30 p.m and on Dec. 20 at 6 p.m. Tickets cost $45 per car went on sale on Wednesday at 9 a.m. on the ballet's website.

• Trick-or-treating will continue as normal for most of Mahoning Valley this Halloween despite the CDC guidelines which list the tradition as a high-risk activity. A few cities have canceled traditional trick-or-treating or created alternative plans.

• Initial claims for unemployment compensation remain above 17,000 and essentially unchanged over the past two weeks. Ohioans filed 17,531 claims for the week ending Oct. 24, just down from the 17,598 filed the previous week, according to the Department of Job and Family Services. To date during the pandemic, the state has paid $7.1 billion in unemployment compensation payments to more than 830,000 Ohioans.

• According to the Pennsylvania Department of Health on Thursday, there are 202,876 COVID-19 cases in the state which have led to 8,762 deaths. The state said the recovery rate is 77 percent. There have been 1,073 confirmed or suspected cases in Mercer County and 27 deaths; 903 cases in Lawrence County and 34 deaths.