Attorney General Dave Yost, addressing Ohio police officials, said: "Those bad cops — and you know who they are — they're making your job and your mission harder. Those few bad cops are putting your life in jeopardy. They're making you less safe on the street."
Jun 18, 2020 3:52 AM By: Justin Dennis 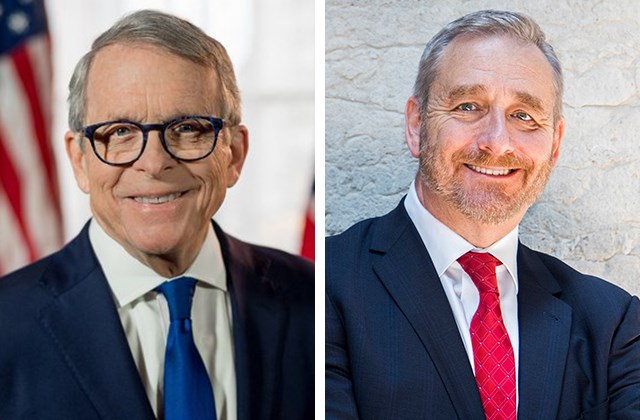 COLUMBUS — In response to ongoing civil unrest following the May death of George Floyd during an encounter with Minneapolis police, new Ohio policing recommendations outlined Wednesday promise more accountability for the "fraction" of cops whom Gov. Mike DeWine said Wednesday are "not cut out to be in law enforcement."

During a Wednesday media briefing, DeWine and Attorney General Dave Yost announced legislative proposals for sweeping changes to police accountability and oversight in the state.

"This is a process and we must all commit to staying with that process for many months and many years ahead. Many of the things that I would outline today have been part of the Ohio Legislative Black Caucus' agenda for some period of time," DeWine said.

"These are things that have been talked about for a long, long time," he later told reporters. "It's time for us to get these things done."

A NEW OVERSIGHT BOARD

A newly proposed law enforcement oversight and accountability board would operate much like state licensing boards for doctors, lawyers and barbers, which have the authority to suspend or revoke professional licenses for failure to follow standards.

Currently, Ohio peace officers' certificates may only be revoked if they're convicted of a felony, DeWine said. Often following misconduct, the responsible officers are able to keep their credentials and simply move to a different department.

"The sad truth is the new agency does not know the background of that particular officer," DeWine said.

Yost, addressing heads of police agencies statewide, said: "Those bad cops — and you know who they are — they're making your job and your mission harder. Those few bad cops are putting your life in jeopardy. They're making you less safe on the street."

He said he feels an oversight board that ensures misconduct reports follow officers would be "incredibly beneficial to all law enforcement agencies." Many of his former employees terminated for misconduct still wear the badge in Ohio, he said. "It is bad business for everybody," he said.

The governor also wants the Ohio Peace Officer Training Commission to conduct psychological screenings for all basic training applicants before they're accepted into a police academy. The commission would also check applicant's references before issuing their certificate.

DeWine said Wednesday he's directed the Ohio Office of Criminal Justice Services to begin developing a database of all incidents in which police employ force. That database would be made public, along with related incident reports "to allow for a better understanding of each incident," DeWine said.

DeWine asked state legislators to develop a standard use-of-force definition and mandate reporting of those incidents to OCJS.

The data would help identify scenarios that most often lead officers to use force, create de-escalation training for those situations and direct targeted grant funding to improve community-police relations in the areas where they occur.

Similarly, DeWine asked legislators to ban the use of chokehold maneuvers by law enforcement agencies statewide, except in instances where the lives of an officer or citizen are threatened, or when deadly force would otherwise be warranted.

Greene said though such maneuvers aren't part of local deputies' official training, he feels officers' perceptions of mortal threat will be "very open to interpretation, based on the situation."

DeWine, responding to reporters' questions Wednesday on whether misinterpreted threats cause unnecessary escalation of force, said that's why enhanced protocols and training are important.

Review of whether officers followed protocol when making such "rare, split-second decisions" will determine whether they acted appropriately, he said.

DeWine is also calling for mandated independent investigations of all officer-involved shootings, deaths while in police custody or other use-of-force incidents.

"The concept of internally investigating these incidents is outdated and does not inspire public trust," he said Wednesday. "Even if an agency’s internal affairs unit conducts these investigations strictly by the book, there can still be the perception that investigators are covering for their co-workers.

"Simply put, law enforcement agencies should not be investigating themselves."

Though agencies have been able to request the Ohio Bureau of Criminal Investigation for independent officer investigations, to avoid "the perception of impropriety," it's not required, DeWine said. The new rule would also allow other qualified independent agencies to investigate these incidents.

The Mahoning County Sheriff's Office already employs BCI, but Greene said agencies like the Buckeye Sheriff's Association are also able to coordinate third-party investigations by deputies who work at least two counties away.

The Ohio State Highway Patrol, one agency that has always investigated itself, will now be investigated by BCI, DeWine added.

DeWine has also asked the legislature to mandate independent prosecutors in officer-involved deaths. County prosecutors' close work with police officers in their jurisdiction may still give "the perception of impropriety," he said.

In Mahoning County, the decision to bring in an independent prosecutor is up to Prosecutor Paul Gains' office, which in the past has requested assistance from neighboring prosecutors or special prosecutors from the Attorney General's office.

"When there's any doubt of an apparent conflict or an appearance of impropriety or favoritism, then we will bring in an independent prosecutor to review the case," Gains said Wednesday.

The Ohio Office of Criminal Justice Services this year will fund six additional hours of advanced training for Ohio officers, focused on use of force, officers' unconscious biases and de-escalation tactics for situations involving the mentally ill or drug- or alcohol-dependent, DeWine announced. The training will be free for officers who have not already received the training this year.

In Ohio, advanced police training is not mandatory unless reimbursed by the state, except for firearms re-qualifications. But DeWine on Wednesday called those state funding mechanisms "a patchwork."

For Greene's office, it's more expensive to pay overtime to fill shifts while other deputies are away on training, he said.

"Any type of training would certainly be welcome and be positive," he said. "We're always on a super-thin budget. ... A continuous fund for training would be awesome."

DeWine also asked legislators to drum up funding assistance to provide body-worn cameras to agencies that don't already have them, like Boardman Police Department.

“Right now, it’s a funding issue for us,” he said.

According to a Wednesday release, the alliance's Police Reform Support Network will:

"Cities and local police departments can't solve these problems alone," Brown said. "We need external support to help break down some of these barriers to reform that have existed for far too long."