Don’t worry if you catch coronavirus when fully vaccinated — it can happen. How often? 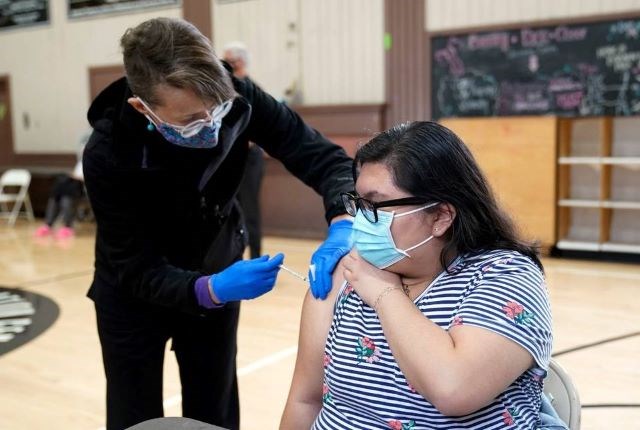 Esselen Reza, right, receives a dose of the Pfizer COVID-19 vaccine at the Banning Recreation Center in Wilmington, Calif., on April 13. Some people may still contract the coronavirus even after receiving their final vaccine dose, yet while rare, it does not mean the vaccine is ineffective, experts say. (Marcio Jose Sanchez | AP)

When the first COVID-19 vaccine became available in the U.S., the nation unclenched its jaw and exhaled a sigh of relief. But to many’s surprise, the shot was not a guarantee for lifelong immunity against the disease.

Some people may still contract the coronavirus even after receiving their final vaccine dose, yet while rare, it does not mean the vaccine is ineffective, experts say. No vaccine is perfect, including those for COVID-19. It’s like treating a field full of hungry bugs with pesticides — while some critters will succumb to the poisonous fumes, others will emerge untouched from the defense designed to attack it.

But in this case, people who get infected with the coronavirus two weeks or more after their final dose aren’t walking away unaffected, they are still protected from severe disease and death.

In fact, all three COVID-19 vaccines authorized for emergency use in the U.S., including those from Pfizer, Moderna and Johnson & Johnson, offered 100 percent protection against hospitalization and death in clinical trials, but not against infection.

As of April 14, about 5,800 vaccinated people out of nearly 77 million who have been fully vaccinated in the U.S. have tested positive for the coronavirus, the Centers for Disease Control and Prevention told CNN. Some of these people became “seriously ill” and 74 died. Meanwhile, 7 percent (396 people) who got infected after vaccination required hospitalization.

Just over 40 percent of the infections occurred in people aged 60 or older, and most (65 percent) were in women and 29 percent were asymptomatic, meaning no symptoms were felt.

The numbers are the latest evidence of how effective the COVID-19 vaccines are in real life outside of lab settings, which involved thousands of people, not millions. Still, the risk of serious illness and death remain low after COVID-19 vaccination. These breakthrough cases represent just 0.008 percent of the fully vaccinated population.

Ariel Silver of Northbrook, Illinois told NBC Chicago she received her second dose of the Pfizer vaccine in mid-January, then tested positive for COVID-19 in early March.

“It hit me hard. I’ve read that if someone vaccinated gets COVID, it’s usually very mild symptoms. But for two days my symptoms were not mild at all. I was in bed, very ill,” Silver told the outlet. “I could only imagine not having the vaccine and getting COVID and how much worse it would be. I do feel like it protected me against hospitalization and God forbid, death.”

No vaccine is 100 percent effective

Clinical trials showed the Pfizer and Moderna vaccines lowered risks of developing symptomatic COVID-19 by about 95 percent. This means vaccinated people were about 20 times less likely to get the disease than those who didn’t receive a shot.

The Johnson & Johnson vaccine had a 72 percent efficacy rate among Americans. Experts say the protection appears to be lower because it was the only shot that was tested against the more contagious coronavirus variants.

In other words, the vaccines aren’t capable of protecting everyone from infection, but they are able to protect them by spurring the development of antibodies without causing sickness, the Centers for Disease Control and Prevention says.

For comparison, the flu vaccine is between 40 percent and 60 percent effective, depending on the version of the virus that’s circulating in a given year, the CDC says. Yet, the flu vaccine prevented an estimated 7.5 million flu illnesses, 105,000 hospitalizations and 6,300 deaths during the 2019-2020 season.

“You will see breakthrough infections in any vaccination when you’re vaccinating literally tens and tens and tens of millions of people,” Dr. Anthony Fauci, President Joe Biden’s medical adviser, said of recent breakthrough coronavirus cases across the country during a Friday White House COVID-19 briefing. “So, in some respects, that’s not surprising.”

Scientists are also learning more about how well the coronavirus vaccines work in real-world conditions, that is, outside the controlled laboratory settings where the initial clinical trials took place.

A CDC study posted Monday found that risk of coronavirus infection dropped by 90 percent two weeks after receiving a second and final dose, and by 80 percent two weeks following a single dose among nearly 4,000 health care workers, first responders and other essential workers across six states. Overall, it suggests vaccines can curb coronavirus spread because infections among people who received a shot were uncommon.

But of concern is the extent to which the coronavirus variants are causing breakthrough infections, Fauci said during the COVID-19 briefing.

“One of the important things that will be done and must be done is to sequence the genome of the virus that’s the breakthrough virus, because it would be very important to see if they broke through with the wild-type virus, which would indicate a real diminution of immunity, or whether it broke through with one of the variants, which would be much more explainable,” he said.

The CDC has deployed a small team to study breakthrough cases and the role variants might be playing, according to the New York Times. At the moment, the agency does not have evidence that suggests the variants are causing coronavirus infections after vaccination.

It's not all about the vaccine

Another reason why people may still contract the coronavirus two or more weeks after complete vaccination is that their immune systems may not produce as many protective antibodies as others, Dr. Ali Ellebedy, an immunologist at Washington University in St. Louis, told the Atlantic. Some people may also have medical conditions that make it hard for their bodies to defend itself against germs.

The range of vaccine responses “isn’t a variation of two- to threefold; it’s thousands,” Ellebedy said. “Being vaccinated doesn’t mean you are immune. It means you have a better chance of protection.”

It’s like tanning; the more time spent under the sun, the greater your chances of getting sunburned.