Two of the twins are linemen, two are running backs, but none of the brothers play the same position.
Nov 8, 2019 12:06 PM By: Tom Williams 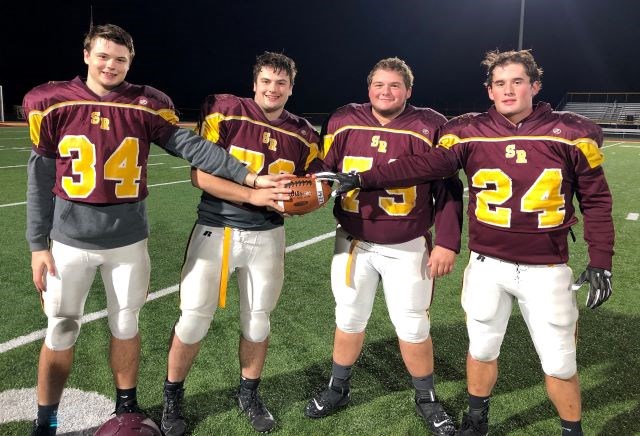 The South Range football team has two sets of twins. From left are Patrick McCabe, Colin McCabe, Rocco DeLucia and Anthony DeLucia. Despite being a Division V school, the Raiders finished second in the Northeast 8 Conference and will host Bellaire in Saturday’s playoff game. (Photo by Tom Williams)

The Raiders (7-3, 5-2) boast two sets of twins — the McCabes (Colin and Patrick) and the DeLucias (Rocco and Anthony). The seniors earned their third varsity letters this season and are getting ready to host Bellaire (7-3) on Saturday in the Division V Region 17 playoffs.

Two of the twins are linemen, two are running backs, but none of the brothers play the same position.

Colin McCabe is a two-way starter on the Raiders’ offensive line and at linebacker. His fraternal twin brother, Patrick, is a running back.

At center, Rocco DeLucia anchors the offensive line and sometimes plays defensive line. His fraternal twin brother, Anthony, is a running back and linebacker.

“Great leader in the weight room,” Raiders head coach Dan Yeagley said of Rocco DeLucia (5-foot-9, 265 pounds). “He works very, very hard and is one of the strongest kids.”

Yeagley said Anthony DeLucia (5-9, 210) is the blocking back on offense.

“He loves the weight room and is one of those quiet leaders,” Yeagley said. “He’s one of the few we have going both ways right now.”

Colin McCabe (5-9, 220) is the other Raider playing both sides of the ball, at guard and linebacker.

“He’s so much fun,” said Yeagley, adding that he wasn’t sure Colin was going to play this season because of a summer internship working on an oil rig south of Pittsburgh. “He’s going into petroleum engineering — very smart,” Yeagley said. “He has a great future ahead of him.”

“He plays some defensive end, also,” Yeagley said. “They are all very good students.”

There’s another twin connection to the team. Senior lineman Cade Holmes has a twin sister, Aurora.

“Colin wanted to play first, but we both started playing in fifth grade,” Patrick McCabe said. “I used to be a tight end, but in seventh grade, they moved me to running back.”

Asked which brother is better at football, Patrick McCabe laughed, then said Colin because “he plays both ways.”

Colin responded, “He’s probably better. I think he’s lying when he says that. He’s trying to be humble, [but] he’s more athletic than I am.

“We have our different strengths, I guess — I can block a 300-pound lineman, but I can’t hit a hole as fast as he can.”

Rocco DeLucia says comparing him with his twin is like apples and oranges.

“Two different styles of players,” the center said. “[Anthony] definitely has more agility than me. He works on speed training, and I just work on power.

“Sometimes I read defenses, but not nearly as much as him. He has more obligations because he has to hit the hole, and on defense he has to fit in his gap.”

“We thought it was really cool — both wanted to play,” he said.

“I worked 12 hours a day on a drill-out rig, grabbing tanks, changing plug-catchers,” Colin said of his summer internship. “They are simple jobs, but important.

“It was intimidating [working with] a bunch of 40-year-olds — I was 17. They had a bunch of college interns, so I was lucky to get in there. It was a pretty good experience. I definitely had fun.”

Anthony DeLucia might run track in the spring. He hasn’t decided whether he will go to college or enlist in the U.S. Air Force.

“I think it’s really nice to serve your country,” he said. “They get the respect they deserve, and it’s a really cool aspect to protecting our country.”

Rocco DeLucia is hoping to repeat a favorite memory from 2017.

“It was great to keep playing — 14 weeks in and we practiced on Thanksgiving morning,” he said. “It was great fun — weird but really fun. We have to make this season last because it’s our last.”

After two seasons as an independent team following the breakup of the Inter-Tri County League in the spring of 2017, South Range’s football team began play in the NE8 in August.

In 2017 when the twins were sophomores, the Raiders went undefeated in the regular season, then captured three playoff wins before falling to Pemberville Eastwood 21-7 in the state semifinals.

Despite missing the postseason in 2018, Rocco DeLucia had “high expectations, but with a new league you never know what’s going to happen.

“You have all these Division IV teams — Poland a powerhouse and Girard went to state last year, and most of those players still playing.”

In August, the Raiders opened with a 23-20 overtime loss to Springfield (10-0), their former ICTL archrival.

Following shutout victories over Crestview and Canton Central Catholic, South Range dropped its NE8 opener to Poland (27-7). After a 36-22 win over Girard, the Raiders fell to 3-3 with a 35-34 overtime loss to Niles.

They rebounded with wins over Jefferson, Lakeview, Struthers and Hubbard to finish fourth in Region 17.

“We’re all very happy with how the season has gone,” Patrick McCabe said. “I don’t think a lot of people thought we would go 7-3 in this league, but we came together and beat a lot of good teams.”

Colin McCabe added, “We had two very close [losses]. We had a really good season, kind of made our mark in this league. Hopefully, the teams after us do even better.”

South Range and Jefferson are the only Division V schools in the NE8. The rest are Division III or Division IV.

“This is huge for our program because those are great programs,” Yeagley said of the new league rivals.

Asked if this was his team’s toughest schedule in his 25 years as head coach, Yeagley deflected.

“Last year was really tough, too,” Yeagley said. “As a league, oh my goodness, this is a really tough [one]. Our kids fought through, and we got better as the season went on.”

Rocco DeLucia is intrigued by the rematch between his new league rivals.

“When I saw it was 14-12 [last week’s Poland win over Struthers], I was really surprised — not really sure how they hung in there with them,” he said of the Wildcats.

“It shows how good Struthers actually is, and we put 49 on them while Poland could only [score] 14. That shows something.”

The veteran lineman says it’s been an “eye-opening season, eye-opening to the rest of the teams in the league that we can really compete. I think this is the perfect league for us.”

Anthony Lucia is thrilled for the opportunity to extend the season.

“It’s great to be here in the playoffs,” he said. “We didn’t make it last year, and I’m very thankful to make it this year. It was hard to get here.”