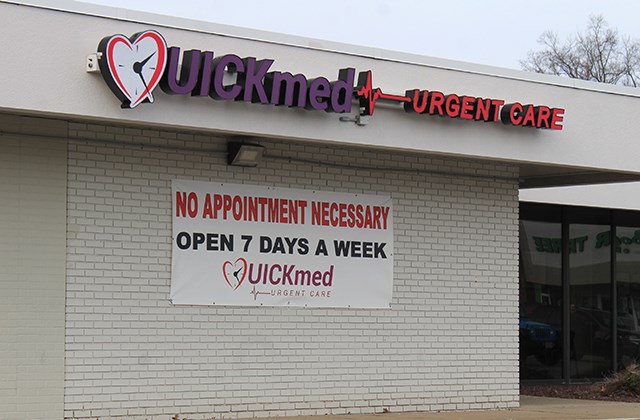 Shown here is the Quickmed Urgent Care facility at 3499 Belmont Ave. in Liberty, where visitors can stay in their vehicle to get tested for coronavirus. Quickmed has partnered with Cornerstone CM and the City of Campbell for a drive-up coronavirus testing clinic at the city's Roosevelt Park, which opened to the public today. (Justin Dennis/Mahoning Matters)

CAMPBELL — Drive-up testing for the new coronavirus, or COVID-19, in the city is set to be made available to the public today.

A remote clinic is set for 9 a.m. to 4:30 p.m. today outside the Community Center in Campbell’s Roosevelt Park along Sycamore Drive, just south of the U.S. Route 422 intersection.

Lena Esmail, nurse practitioner and CEO at QUICKmed Urgent Care, which partnered with Cornerstone CM, the test provider, and the city to establish one of, if not the only publicly available drive-up testing operation in the region, said workers took samples from about 60 people during Monday’s testing, which was reserved for medical workers and first responders.

“Everything’s been going off without a hitch. People are being patient. It’s very organized,” said Campbell Mayor Nick Phillips.

Beginning today, the clinic will be open to the public. Esmail said drive-up testing will continue daily through the week, after which providers will reassess whether it’s having an impact on identifying new positive cases.

“What kind of symptoms are the patients presenting with? Are we getting patients that have valid symptoms or patients who just want to be screened?” she said. “It really depends on how many people call for the service and also how effective it is in identifying positives.”

Pre-registration and telehealth screening is mandatory, as medical workers continue to conserve tests for those at greatest risk from the disease, Esmail said.

Another about 300 people were pre-screened or queued for screening Monday, Esmail said. The clinic can test up to 500 people each day.

To pre-register, visit QUICKmed-uc.com or call 724-734-5235. Patients will be screened to see if they meet the requirements for testing, Esmail said.

To reach the clinic, pre-registrants should enter the park from Sycamore Drive, approaching from U.S. Route 422. Campbell police, Mahoning County deputies and State Highway Patrol troopers will direct traffic. Pre-registrants won’t have to get out of their cars.

The park will remain otherwise closed while the clinic is operating, according to a release from the city.

Phillips, who initially reached out to U.S. Rep. Tim Ryan of Howland, D-13th, asking how the city could help respond to COVID-19 and offering a couple of locations for drive-up testing, said the collaboration happened at “lightning speed.”

“On behalf of myself and the City of Campbell I would like to thank the first responders, front line essential workers and medical professionals of all kinds, in all fields, for their courage reporting to work the front lines, day after day, risking direct exposure, to keep Americans safe, healthy and provide the supply chain to the multitude of Americans under stay-at-home orders,” Phillips said in a release last week.

Residents who believe they’re developing symptoms of COVID-19, which include dry cough, sore throat, fever and shortness of breath, can also get tested at QUICKmed’s 3499 Belmont Ave. location in Liberty Township, Esmail said.

The service at QUICKmed also doesn’t require visitors to leave their vehicles, she said.

“This way the Urgent Care remains open for the injuries and complaints as well. People without upper respiratory [symptoms] can feel safe coming into the Urgent Care,” Esmail said.

To respond to increased demand for COVID-19 testing, QUICKmed’s Cortland location has been temporarily closed, with its staff reallocated to other locations, she said.