The Canfield Fairgrounds is the only connection to the city's public water system that doesn't have backflow prevention, the EPA noted Friday.
Jan 14, 2020 3:26 AM By: Justin Dennis 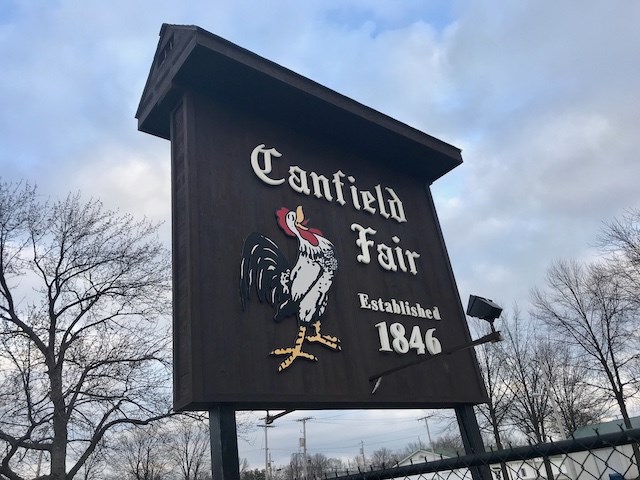 The sign at the entrance to the Canfield Fairgrounds. (Bob Yosay/Mahoning Matters)

CANFIELD — A potentially hazardous lack of backflow prevention in the water system serving the Canfield Fairgrounds has drawn attention from the Ohio EPA.

The agency on Friday issued a notice of violation to the City of Canfield, which is charged with enforcing water quality rules on its water customers. The notice cites two auxiliary wells at the fairgrounds used for watering the racetrack as well as “intricate plumbing arrangements” that could connect to sources of water contamination such as animal barns.

The city’s enforced installation of backflow prevention devices on all its water system’s commercial connections — including 85 connections reportedly without during the city’s last EPA water system survey in 2016 — except for on the two six-inch lines serving the Canfield Fairgrounds, which the EPA has categorized a “significant deficiency.”

The notice estimates the upgrades would cost $90,000 and include buildings at each service connection according to a plan developed by MS Consultants.

According to the notice, though the city offered to share costs of the upgrades, fairgrounds operators still haven’t moved ahead with the installation, citing cost for the delay.

Calhoun told Mahoning Matters on Monday council members initially considered sharing costs but decided ultimately against it, as the city has never before offered such assistance to a private customer.

Officials have 30 days from the issuance of the notice to correct the violation or provide the EPA with a plan to correct it.

Fair Manager Bev Fisher declined to comment on the issue Monday, as she hadn’t reviewed it with the Fairgrounds’ grounds committee and other officials who will be unavailable until later this month.

She said, however, she didn’t expect a delay in correcting the violation.