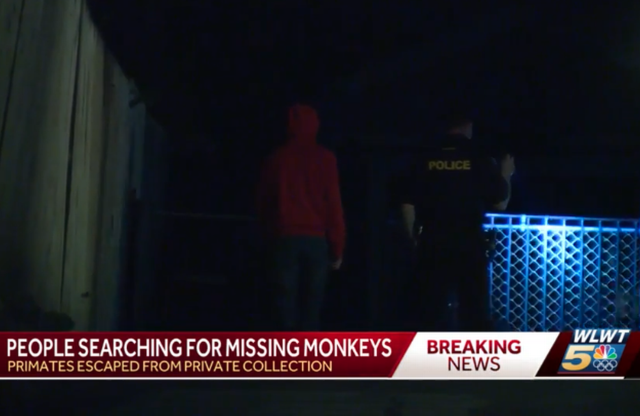 Police in Cincinnati are searching for monkeys that escaped from a private collection. (WLWT screenshot)

Five monkeys are on the loose in a Cincinnati neighborhood after escaping from a private collection — and the search is on, police say.

The Cincinnati Zoo has been called to help corral the monkeys, which were first spotted around 10 p.m. Wednesday, FOX 19 reported. The search area in the Price Hill neighborhood is located about 4 miles west of downtown.

The breed of the monkeys is unclear, but some witnesses say they are taller than a garbage can, according to WKRC.

Some of the monkeys were swinging through trees in a cemetery to evade officers trying to capture them, WLWT reported.

“I just stood there as my eyes adjusted to pitch blackness and that is when I saw it, just standing there, taller than a garbage can, and its arms were real long hanging down, and its arms are real skinny,” Alycha Tucker told WLWT.

Some breeds of monkeys are legal to own in Ohio, such as lemurs and squirrel monkeys. Other breeds are considered dangerous and are illegal.