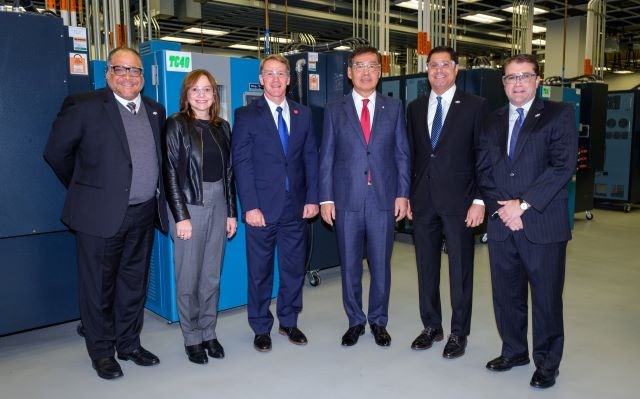 Ohio Lt. Governor Jon Husted, third from left, is flanked by General Motors Chairwoman and CEO Mary Barra, left, and LG Chem Vice Chairman and CEO Hak Cheol Shin as GM and LG Chem announce a new joint venture that will mass produce electric vehicle batteries in Lordstown. The announcement was made today in Warren, Mich. The two companies will invest up to $2.3 billion to create a battery cell assembly plant in Lordstown. The joint venture will create more than 1,100 new jobs. Groundbreaking is expected in mid-2020. (Photo by Steve Fecht for GM and LG Chem)

The plant is a joint venture between GM and LG Chem and will create more than 1,100 new jobs.

When asked if the plant employees would be members of the United Auto Workers, Barra said, "That's up to the workforce."

According to a GM news release: "The JV will establish a battery cell assembly plant on a greenfield manufacturing site in the Lordstown area of Northeast Ohio that will create more than 1,100 new jobs. The state-of-the art plant will use the most advanced manufacturing processes all under one roof to produce cells efficiently, with little waste, and will benefit from strong economies of scale throughout the value chain. The plant will be extremely flexible and able to adapt to ongoing advances in technology and materials."

The company added: "This announcement, along with the recent sale of GM’s manufacturing complex in Lordstown, Ohio to Lordstown Motors Corp. for the production of battery-electric trucks, positions Northeast Ohio and the Mahoning Valley as a major hub for technology and electric vehicle manufacturing."

Barra said General Motors does not have a formal relationship with Workhorse or the Lordstown Motors Corp., but "that's not to say there couldn't be something in the future."

What wasn't announced, however, was the site of the new venture.

The announcement suggests the new plant is set for some previously undeveloped plot in the Lordstown area. Village Mayor Arno Hill said he's not sure where.

"I think there's a couple sites in the running," he told Mahoning Matters.

"There's been lots of inquiries for zoning maps" -- but likely not just from General Motors or partners, he said. Site selections work is usually conducted by an outside agency anyway, he added.

"I think it's only going to be positive," Hill said, adding the village is ready to consider tax incentives. "I'm very positive we're going to be able to bring it home."

The Reuters news agency broke the news this morning that South Korea's LG Chem will invest $916 million in its U.S. subsidiary to create an electric vehicle battery joint venture with GM expected to be located in Lordstown.

A source told Reuters earlier that the facility would see more than $2 billion in investments with GM and LG Chem expected to invest more than $1 billion each.

“This is amazing news for the Mahoning Valley and all of Northeast Ohio. GM and LG Chem’s announcement to build an electric battery plant in Lordstown speaks to the unwavering commitment, strong work-ethic, and innovative spirit of our community,” said U.S. Rep. Tim Ryan. “Electric vehicles are the future of our economy and transportation system."

Ryan added: "Lordstown Motors and GM-LG Chem’s announcements are not only great for our community in Northeast Ohio, but for our country as well.”

U.S. Sen. Sherrod Brown had a more cautined response: "“Autoworkers in the Valley are among the best in the world at what they do, and any investment in Ohio workers is a smart investment. At the same time, we know that GM could have made a better investment in the Valley by bringing a new vehicle to Lordstown -- and saving the jobs of its 4,500 workers at the plant.

"I will continue pushing GM to ensure these new jobs are good-paying, union jobs that are good for the Valley as they move forward on the plant,”  Brown said in a statement.

State officials are also weighing in on the news. Ohio Lt. Governor Jon Husted traveled to Michigan today to attend the signing of the deal between Barra and LG Chem CEO H.C. Shin.

"It is great news for Ohio that GM and LG Chem are going to build a new electric battery facility here,” said Gov. Mike DeWine said in a statement. “Ohio is a major supplier state for the automotive industry, and the announcement that Ohio will be the location to manufacture next-generation electric batteries will mean more than 1,100 new jobs for Ohioans.”

“The joint venture between GM and LG Chem will bring an advanced battery production facility to Ohio that will keep our state at the forefront of the automotive industry as it continues to evolve,” J.P. Nauseef, JobsOhio president and chief investment officer,said in a statement. “This agreement shows confidence in Ohio’s automotive talent, and we are excited to work with GM and LG Chem as they move forward with this project that will bring new high-tech jobs and investment here."

State Sen. Sean J. O’Brien, D-Bazetta, said in a statement: "Not only does this new venture show that the Valley is open for business, but that we are a leader in developing cutting edge technology.

“Local, state and federal leaders have prioritized these types of investments in our future," O'Brien said. "By collaborating with many other community leaders and groups – like YSU, Kent State, Eastern Gateway, TBEIC and others – we’ve been able to continually develop and attract innovative businesses here. It is by continuing to work together that we will enable the Valley to become the electric battery capital of the world.”

In a statement, the Youngstown/Warren Regional Chamber said: "We continue to be proud of the Youngstown-Warren community, which came together and rallied for our Valley through the ‘Drive It Home’ campaign that launched last fall when GM announced in November that its Lordstown Complex would be shuttered in the spring of 2019. With a unified voice, we let GM know through the deliberate messaging of Drive It Home that we would continue to welcome them in our region and hoped they would utilize our strong and capable workforce."

An EV battery business for Lordstown has been discussed for months.

"Projects planned for the Mahoning Valley include the opportunity to bring battery cell production to the area, which would create approximately 1,000 manufacturing jobs, as well as the sale of the GM Lordstown complex to Lordstown Motors Corp., a new company that plans to build electric pickups for commercial fleet customers. Lordstown Motors Corp. plans to create 400 manufacturing jobs initially," he said in a statement.

In November, Dan Tierney, Gov. Mike DeWine’s spokesman, said the state’s economic development agency JobsOhio was aware of “another opportunity in the early stages” that would bring more automotive manufacturing work back to the Lordstown area.

During a November tour of what is now the Lordstown Motors Corp. plant, Rich Schmidt, Tesla Motors’ former director of manufacturing operations and now Lordstown Motors’ chief production officer, said the reconfigured plant will need to add two new production lines for the Endurance — one for battery cells and another for hub motors that power each of the wheels.

YSU Dance Ensemble to take the stage for 29th consecutive year
Feb 21, 2020 1:36 PM
Comments
We welcome your feedback and encourage you to share your thoughts on this story. We ask that you be respectful of others and their points of view, refrain from personal attacks and stay on topic. To learn about our commenting policies and how we moderate, please read our Community Guidelines.