The FBI has not provided any details about Monday's search of the Columbus home of Sam Randazzo, chairman of the Public Utilities Commission of Ohio.
Nov 18, 2020 4:40 AM By: Julie Carr Smyth and Mark Gillispie 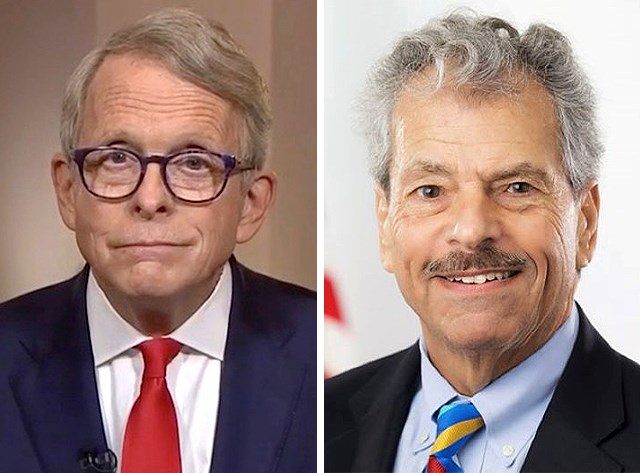 COLUMBUS (AP) — At a news briefing Tuesday to discuss the latest measures in the state's effort to control the coronavirus pandemic, Gov. Mike DeWine deflected questions about an FBI search of the Columbus home of his appointee as the state's top utility regulator.

DeWine announced in February 2019 the appointment of Sam Randazzo, a longtime utility attorney and lobbyist, as chairman of the Public Utilities Commission of Ohio.

In response to a question, the Republican governor said there were no indications that Randazzo was under investigation or the target of an investigation.

“We’re waiting for additional information, quite candidly,” DeWine said. “I hired him. I think he’s a good person. If there’s evidence to the contrary, we’ll act accordingly. But I’m not going to act without the facts.”

The FBI has not provided any details about Monday's search. A PUCO spokesperson declined to comment and said Randazzo was not available for an interview Monday.

The PUCO chair is one of the most powerful positions in state government, wielding extraordinary influence on matters regarding the regulation of utilities in the state to include utility profits and rates charged to customers. As PUCO chairman, Randazzo also is chairman of the Ohio Power Siting Board, which has oversight approval for new electric-generating facilities.

The search came nearly four months after the FBI arrested then-Ohio House Speaker Larry Householder and four others in connection to a $60 million bribery scheme funded by Akron-based FirstEnergy Corp., which was seeking a $1 billion legislative bailout for its two aging nuclear power plants in the state.

Householder and four others were subsequently indicted on racketeering charges in federal court. Householder has pleaded not guilty. Two of the men indicted with Householder have pleaded guilty to charges. The FBI would not say whether Monday’s search was related to that bribery probe.

A coalition of consumer and environmental groups Tuesday called on DeWine to immediately remove Randazzo from the PUCO, citing his “well-known” ties to FirstEnergy. The governor has the sole authority to remove PUCO commission members.

“We have adamantly opposed Randazzo’s appointment since February 2019. He does not hold an elected position, so the power to remove him rests squarely on the shoulders of the governor,” the coalition said in a joint statement.

The groups, including Ohio Citizen Action, Black Environmental Leaders, Evangelical Environmental Network and Moms Clean Air Force, said Randazzo can’t oversee utilities in a fair and ethical way if he is being investigated by the FBI.

On Monday, a former chair of the Ohio Republican Party who is among those charged in the alleged bribery scheme denied wrongdoing in an interview.

Borges pleaded not guilty in August to a charge of racketeering after a July indictment.

Borges' attorney asked a Franklin County judge Monday to dismiss a lawsuit filed by Republican Ohio Attorney General Dave Yost that seeks to stop money from being collected from nearly all Ohio electric ratepayers beginning in January to pay for the nuclear plant subsidies.